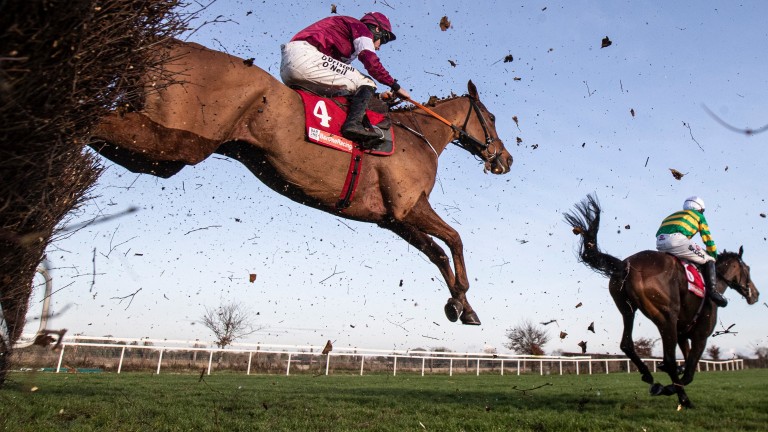 Samcro and Fakir D'Oudairies are both entered in the Grade 1 novice chase at Limerick
Patrick McCann
1 of 1
By Mark Boylan UPDATED 11:31AM, DEC 9 2019

Limerick manager Patrick O'Callaghan is hoping for a Drinmore rematch between Fakir D'Oudairies and Samcro in the Grade 1 Matchbook Betting Exchange Novice Chase on December 26.

The 2m3½f event, which was awarded Grade 1 status last year, has a stellar cast of entries, with 13 Willie Mullins-trained novices – including Faugheen, Laurina and Melon – as well as Fakir D'Oudairies and Samcro.

"You could say that the Grade 1 race has been a game-changer for us," he said.

"The distance of our race and the generally slower ground is a help. You may not want to run in a Grade 1 novice chase over three miles at this stage of the season and two miles and one furlong can be too much of a speed test for an inexperienced chaser too."

He added of the possible contenders for this year's race: "There are some fantastic entries and personally I’d absolutely love to see a rematch between Fakir D’Oudairies and Samcro.

"It’d be like two heavyweights going at it again after what happened at Fairyhouse. Add in Faugheen and it has the makings of a serious race."

The Munster venue is thinking big for the future of its festive fixtures, with a number of changes implemented for this year's race programme in a bid to upgrade the festival's quality.

O'Callaghan said: "Our ultimate ambition is to have a Grade 1 or a high-class Graded handicap on each day of the festival and we’re doing our best to take steps towards that.

"It has been won by Faugheen, Martello Tower and Penhill in recent years, and those horses have gone on to win Grade 1s at Cheltenham later in the season. We’d love it to gain Grade 1 status."

The 0-150 Tim Duggan Memorial Handicap Chase will now be run on the third day of the festival, no longer on the same day as the Paddy Power Chase at Leopardstown.

O'Callaghan added: "I’ve spoken to a number of trainers about the changes and the vast majority are positive about what we’re trying to do."

FIRST PUBLISHED 8:00AM, DEC 9 2019
It’d be like two heavyweights going at it again after what happened at Fairyhouse. Add in Faugheen and it has the makings of a serious race