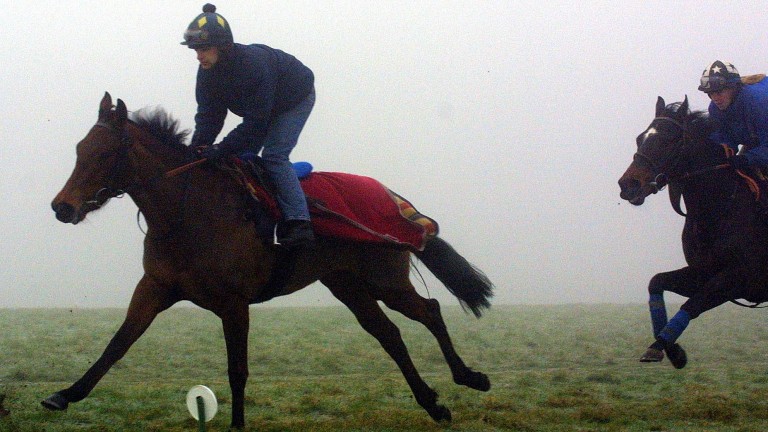 Horses will use the turf canter on Warren Hill for the first time this year from Thursday
1 of 1
UPDATED 2:38PM, JAN 31 2018

The traditional start to the Flat season is to take place as planned in Newmarket on Thursday when the grass canter on Warren Hill will open on the traditional February 1 date.

The marking out of the four-and-a-half-furlong turf facility is more symbolic these days with two all-weather canters available all year round on Warren Hill since the end of the last century.

In times past strings would be queueing up to use the grass facilities after a winter of trotting and light exercise but those days have now gone.

Nick Patton, training grounds manager of Jockey Club Estates, said: "We hope to have the grass canter open on Warren Hill on Thursday where it will be marked out close to the Moulton Road. There's a nice covering of grass for the time of year and hopefully it should ride well. "

Thirsk's loss is Wetherby's gain with the track's popular Totepool Hunt Cup fixture to be staged at Wetherby on May 5, due to a clash with the Tour de Yorkshire.

With the peloton scheduled to come directly through Thirsk town centre on that Saturday, Wetherby will instead stage the fixture in a direct swap, with Thirsk staging Wetherby's fixture on Tuesday, May 8.

Any customers who have already booked their tickets for either fixture are being contacted and offered the opportunity to switch bookings, or to be refunded in full.

From the evening of Wednesday January 31, the original Racing Admin website will be turned off, with its replacement site launching on Thursday, February 1.

Trainers and owners should complete all transactions, including entries and declarations, at the new site; www2.racingadmin.co.uk.

For help with using the system, you can access the help and support site, contact the web support team on 01933 304 828 or email websupport@weatherbys.co.uk.

The funeral of colourful Grade 1-winning trainer Peter Casey, who died at the age of 82 in the early hours of Saturday morning, will take place at 12 noon at the Church of Assumption, Balscadden, County Meath, on Wednesday.

Casey will be reposing at his home in Stamullen, County Meath, on Tuesday from 2pm to 8pm. The house is strictly private. The burial will take place after the funeral in the Old School Cemetery, Balscadden.

The introduction of the Chester Plate, a consolation race for horses who do not get into the Chester Cup, is part of a £238,000 prize-money boost that will help make the Boodles May festival worth seven figures for the first time in 2018.

"This year’s Boodles May festival is set to be the best yet," said Chester chief executive Richard Thomas, who confirmed the course would continue last year's guarantee that every owner with a runner at the track would leave with at least £500.

"The changes we have implemented across the running order, the increase in prize-money and infrastructure improvements at the racecourse will ensure we deliver a spectacular experience for horsemen, racegoers and viewers alike.

"We have fantastic support from our partners in 2018 and look forward to the start of another season of competitive racing on the Roodee."

Southwell has announced significantly reduced distances for its jumps meeting next Monday as waterlogged ground on the outside of the bends means that usual rail movements cannot be made.

The Curragh has confirmed leading bloodstock sales company Tattersalls has agreed to again be the title sponsor of Irish Guineas weekend this May.

The sponsorship will include three Group 1 races – the Irish 2,000 and 1,000 Guineas and the Tattersalls Gold Cup – and the two-day fixture on May 26 and May 27 will be branded as the Tattersalls Irish Guineas Festival

Total prize-money for the Irish 1,000 and 2,000 Guineas has received a major boost with the support of Horse Racing Ireland and Tattersalls with both races increasing from €300,000 €350,000.

Derek McGrath, the Curragh Racecourse CEO, said: "Tattersalls are very valued partners of the Curragh and we are extremely grateful to Edmond Mahony and his team for agreeing again to support three of our premier races in 2018. We look forward to looking at continuing to enhance our partnership to include many new opportunities that our redevelopment project will bring when completed in 2019."

FIRST PUBLISHED 3:28PM, JAN 29 2018
There's a nice covering of grass for the time of year and hopefully it should ride well