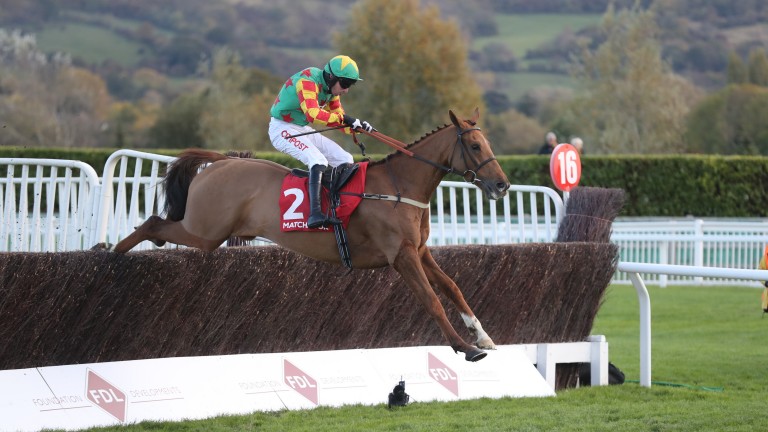 Lil Rockerfeller: three out of three over fences
John Grossick (racingpost.com/photos)
1 of 1
By David Milnes UPDATED 9:29AM, DEC 14 2018

Lil Rockerfeller bids to enhance his RSA Chase claims in a small but select turnout for a race used by Blaklion as a springboard to festival success in 2015.

Flat racing, hurdling and now chasing have all come alike to the admirable seven-year-old, who has earned his five-strong syndicate of owners close to £450,000 since they bought him for just £31,000 at the sales in 2014.

Runner-up in the Stayers' Hurdle in 2017, Lil Rockerfeller could make his fourth successive appearance at the festival in March and is out to extend his unbeaten run over fences to four. He is a 25-1 chance for the RSA Chase heading into Friday's assignment.

After winning at Uttoxeter in October, the Neil King-trained runner jumped sketchily before following up here in October. The fitting of cheekpieces seemed to iron out any concentration issues last time at Exeter, when he completed his hat-trick in smooth fashion.

As usual, Lil Rockerfeller will be cheered on by his full complement of owners in a tricky four-runner affair in which none of the field can be discounted.

Syndicate member John Davies said: "Lil Rockerfeller has been a dream horse to own and has already taken us to the festival three times, and hopefully he can do a fourth.

"He didn't jump well when he was last at Cheltenham, but he put it together at Exeter all right. He'll like the drying ground as he can't really handle soft – it takes it out of him."

Fellow syndicate member Andy Smith, who is also on-course layer, said: "It's a tight race as he's only 1lb clear on the ratings and I wouldn't be surprised if they bet 2-1 each of the front three.

The rival rated 1lb below Lil Rockerfeller is the Tom George-trained The Worlds End, who has a score to settle with the reopposing Ibis Du Rheu.

Ibis Du Rheu, trained by Paul Nicholls, had The Worlds End back in third when scoring at just shy of this trip on the neighbouring Old course last month.

The Worlds End was sent off even-money favourite that day on the back of his impressive debut success over fences at Chepstow.

George said: "Hopefully the New course will suit him better than the other one and he can get closer to Ibis Du Rheu this time. This longer trip should suit."

Of Ibis Du Rheu, Nicholls said: "We were going to go to Doncaster originally but the ground has gone a bit quick up there so we've re-routed.

"We know he likes the track and he should give another good account."

Completing the quartet is Gunfleet, who has work to do on ratings but is the only one of the four not to be shouldering a penalty.

Trainer Emma Lavelle said: "Gunfleet has a bit to find on ratings but he's a nice horse who ran really well in a valuable novice handicap chase at Exeter and is entitled to take his chance."

FIRST PUBLISHED 6:00PM, DEC 13 2018
He didn't jump well when he was last at Cheltenham, but he put it together at Exeter all right