Lil Rockerfeller goes down all guns blazing in Stayers' Hurdle 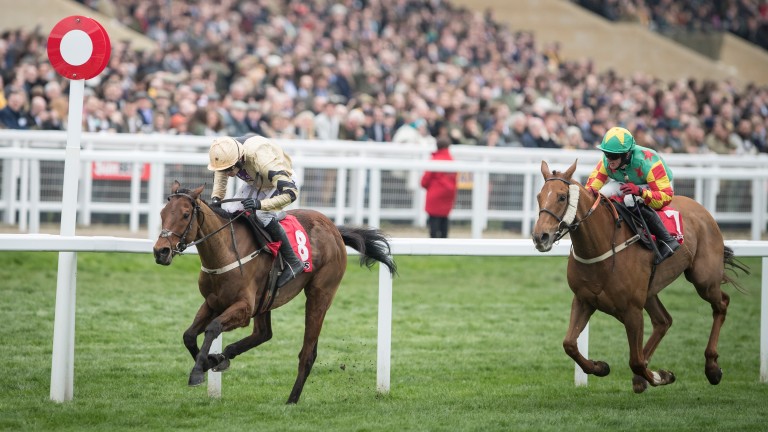 The most emotional scenes following the Sun Bets Stayers' Hurdle were reserved for the runner-up spot, where connections of Lil Rockerfeller, the horse who just keeps on giving, were celebrating their pride and joy running the race of his life behind Nichols Canyon.

Bookmaker Andy Smith, one of a quartet of owners who bought the six-year-old when Neil King acquired him from Richard Hannon's stable for £31,000 as a three-year-old, took command of the ITV microphone held by Alice Plunkett and said: "I'm just so proud of my horse. His trainer's had a bad season, but he's brought him back for today and I thought he had it won at the last.

"We got beaten by a better horse on the day, but I'm pleased for Willie [Mullins], pleased for Neil, and pleased for everyone. It's what National Hunt racing is all about."

Jockey Trevor Whelan possibly loves Lil Rockerfeller nearly as much as Smith and said: "What a horse he is. He was over his sickness and he jumped and travelled really well. He was beaten only by a multiple Grade 1 winner."

King, eyeing Punchestown next, added: "He's as tough as they come but he was a sick horse after the Relkeel, which we thought he'd win. There's no reason not to come back for this next year, as there's plenty of time for chasing."

Noel Fehily, who had been hoping for a third championship win of the week on 5-6 favourite Unowhatimeanharry, felt the drying ground was against the Harry Fry-trained nine-year-old, for whom last year's Albert Bartlett win was one of eight successive victories.

Fehily said: "Unowhatimeanharry has run a great race, but he probably just wants the ground a bit slower. They've quickened off the bend and he's just kept galloping."

On the other hand Warren Greatrex, whose 2015 race winner Cole Harden stuck on for fourth after making most of the running, was cursing the water that had been applied overnight.

Greatrex said: "Cole Harden has done what he does and been beaten less than last year. I just wish Simon Claisse wouldn't water on a Wednesday night. He's not giving a horse like him a chance. They've been running in mud all winter."