Life's a Beach for Brown as Patrol takes Joe Hirsch 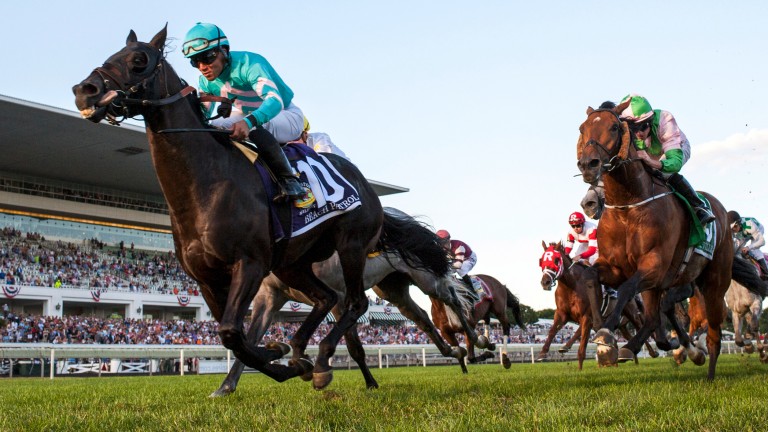 Beach Patrol (Joel Rosario/Chad Brown) put himself forward as the leading home hope in next month's Breeders' Cup Turf when running out a ready winner of the Joe Hirsch Turf Classic at Belmont on Saturday.

The betting for the race had been tight, with 5-1 Beach Patrol fourth choice in the betting, but he made it look simple, tracking leader Converge to the two-furlong marker and stretching clear to win by five lengths from Fanciful Angel, with Secretariat Stakes winner Oscar Performance in third.

The Grey Gatsby was never in a position to challenge and came home ninth of the 11 runners.

The three US-trained winners of the Turf in the last ten years have also won the Joe Hirsch, although Little Mike did so after his victory at Santa Anita in 2012. Main Sequence (2014) did so en route, while English Channel won successive Joe Hirschs either side of his 2007 Turf victory.

Beach Patrol was cut to as short as 8-1 following his win, but could still be backed at 25-1 with Paddy Power.

Also at Belmont on Saturday

El Deal's Breeders' Cup Sprint hopes were dealt a blow when he was beaten by three-year-old Takaful in the Vosburgh Stakes, another of the three Grade 1s at Belmont.

The additional stamina of the Shadwell-owned Takaful proved the difference, as he got the better of a long battle up the straight while third-placed Stallwalkin' Dude closed up.

Takaful is now shorter than El Deal on almost all ante-post lists for the Sprint, but defending champion Drefong is no bigger than 2-1 to claim the title again.

The final Grade 1 of the evening was won in expected fashion by 30-100 favourite Elate, who took the Beldame Stakes by just over eight lengths.

On his first start for Bob Baffert, Mubtaahij entered the Breeders' Cup Classic picture by winning the Awesome Again Stakes at Santa Anita, the feature among five Grade 1s on the west coast on Saturday.

Formerly in the care of Mike de Kock, for whom he won the UAE Derby in 2015, Mubtaahij came from well off the pace to score by a length and a half from Midnight Storm, with favourite and stablemate Cupid back in fourth.

Jockey Drayden van Dyke, who was gaining a first Grade 1 win in association with Baffert, told Paulick Report: "I was really keeping my eye on Cupid and taking my cue from him. I was placed where I wanted to be and didn't start asking him until late. But when I asked him, he responded."

Mubtaahij was introduced at 20-1 for the Breeders' Cup Classic, for which Gun Runner remains the 7-4 favourite.

Jockey Flavien Prat, who won three of the five top-level races on the card, took it up over two furlongs out as his mount stayed on well to win by nearly three lengths.

Callaghan has had plenty of success since crossing the Atlantic at the start of the decade, but has yet to enjoy victory at the Breeders' Cup. Moonshine Memories, now a dual winner at the highest level, is the market leader for the Juvenile Fillies at as short as 2-1 – bet365 go 5-1.

Prat's other two Grade 1 wins came for trainer Richard Mandella. Odds-on favourite Paradise Woods, already winner of the Santa Anita Oaks, took the Zenyatta Stakes by more than five lengths, while Avenge held on to win the Rodeo Drive Stakes on the turf by three-quarters of a length.

The final Grade 1 at Santa Anita was the FrontRunner Stakes for two-year-olds. Bolt D'Oro was a shade of odds-on and ran out a truly emphatic winner, cementing his place at the head of the betting for the Breeders' Cup Juvenile.

Four-timer for Lynch at Laurel

It was a memorable day for formerly British-based jockey Fergal Lynch, who rode a four-timer at Laurel Park in Maryland that included a Grade 3 double on Rymska and Just Howard in the Commonwealth Oaks and Derby respectively.

Get the best international coverage on racingpost.com