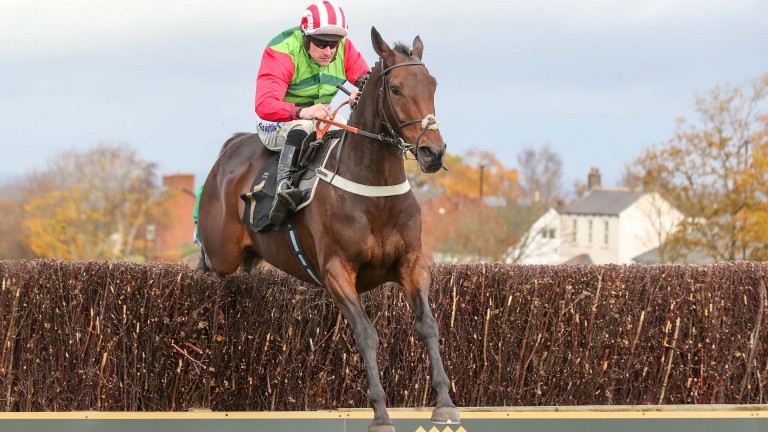 Windsor Avenue: puts his unbeaten chase record on the line
Grossick Photography (racingpost.com/photos)
1 of 1
By David Carr UPDATED 7:48AM, DEC 11 2019

Exciting prospect Windsor Avenue is set to take on fellow unbeaten chaser Sam Spinner in a clash of two of the north's most promising novices at Doncaster on Saturday.

Brian Ellison has made no secret of how talented he believes seven-year-old Windsor Avenue is, and his his two starts over fences at Sedgefield and Carlisle, which he won by a combined total of 33 lengths under Brian Hughes, were impressive to say the least.

They came over trips around two and a half miles, but Ellison is set to step him up in trip for the bet365-sponsored novices' chase where he will meet strong stayer Sam Spinner.

Windsor Avenue has an alternative option at Cheltenham but his trainer said: "He goes to Doncaster. He schooled this morning and he was electric.

"Sam Spinner is the only horse rated higher than him – he's a good horse and an out-and-out stayer. We'll find out about the trip for our horse on Saturday. You don't know until you try but Brian [Hughes] thinks he'll stay.

"I've always rated him highly and think he is one of the best we've had. He's a good horse and he seems to have improved. His form has worked out, the second and third at Sedgefield have won since."

Windsor Avenue is a best-priced 33-1 for the RSA Chase but is far from certain to go to Cheltenham.

"We'll take it race-by-race and I don't know if Cheltenham is on the agenda or not," Ellison said. "It's not the be-all and end-all and it wouldn't worry me if he didn't go there."

"I was over the moon with his run at Aintree," Ellison said. "He jumped like a buck and was staying on. He could have been third but he just got squeezed out at the turn and lost a few places.

"He might just have one more run before the National, but we'll probably wait until the weights come out."

FIRST PUBLISHED 5:57PM, DEC 10 2019
He schooled this morning and he was electric