Lest we forget that fateful Christmas half a century ago 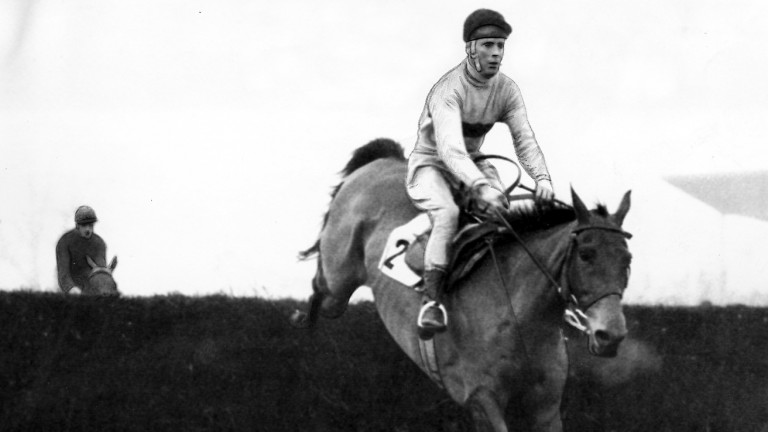 For jumping folk there is only one ghost of Christmas past. In the Allotted Span Stakes you will need to have racked up three score without the ten to have meaningful memories of the event, but it is 50 years since Arkle finished a stricken second to Dormant in Kempton’s King George on December 27, 1966.

And hardly anyone who was not on course that dank and misty afternoon saw it happen as the great race was, for once, not covered by the BBC.

Arkle scholars have searched in vain for footage of his final race. It would be a priceless – although painful to watch – addition to racing’s archive if it could be unearthed.

Arkle had closed out his 1965-66 season with a 30-length defeat of Dormant in the Cheltenham Gold Cup having been sent off at 1-10. That starting price tells you all you need to know about his superiority over his contemporaries.

He returned to action on November 26 in the Hennessy Gold Cup and went down by half a length to the thoroughly excellent grey Stalbridge Colonist to whom he was conceding 35lb.

Stalbridge Colonist was a cracking chaser given a blindingly canny ride by Stan Mellor. Four months later he was beaten just three-quarters of a length in the Gold Cup and went down by a length and a neck the following year.

Time proved that trying to concede a supermarket basket of lead to the seven-year-old Stalbridge Colonist was akin to mission impossible and Arkle’s performance in defeat was mighty.

It is worth noting the dispassionate form book’s close-up comment on Arkle’s run which, in the clipped patois of the time, read: “Led to last, ev ch nr fin: r.o v game.”

Translated from the tweedish, that reads “ran on very gamely” and is a reminder that Arkle was every bit as courageous as he was different class.

But he got no respite and was back in action on Wednesday, December 14, at Ascot in the SGB Chase.

It may surprise some to learn that jump racing at Ascot was still a novelty. Flat racing had taken place there since 1711 but the jumps course was opened only in April 1965.

The terrifying Bernard, Duke of Norfolk, the Queen’s representative at Ascot, had declared jump racing would only take place there “over my dead body”. 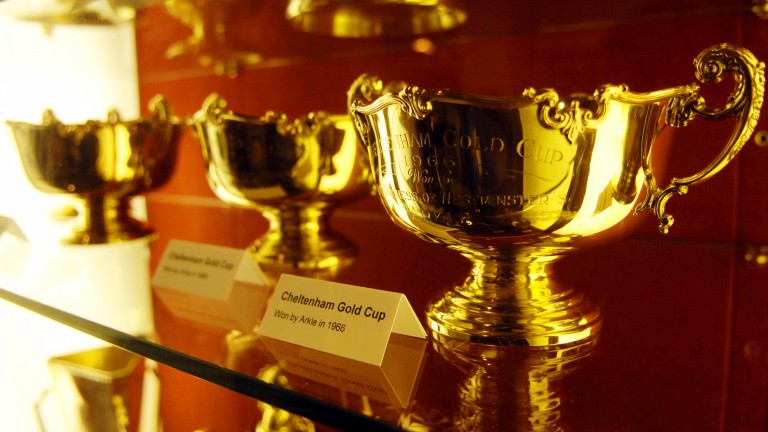 Therefore in addition to the fences you had to be on the lookout for the corpse of the country’s leading Roman Catholic aristocrat as well.
Among Arkle’s four rivals was Vultrix, who had won the SGB 12 months earlier under 12st 1lb. But with Arkle in the field he returned with the feather weight of 10st. That is the degree to which Arkle had redrawn the map of handicap chasing.

Arkle won by 15 lengths doing the proverbial handsprings and returned to a tremendous reception. But most unusually for a chaser who was gun-barrel straight and supremely agile at his fences, he had jumped a little left over the last three.

In his superb book “Arkle: The life and legacy of Himself” – still in print and a must read – Sean Magee relates that Pat Taaffe was uneasy after the race sensing that “Arkle’s action that day had not been quite right”.

Whether this was the wisdom of the moment or the retrospective reflection of later years we will never truly know. But after being fully checked back home at Tom Dreaper’s yard all seemed fine and dandy.

Thirteen days later on December 27 – Kempton’s Boxing Day card having been lost to the frost – Arkle lined up for the King George which was his third race in a month.

Back then the conditions of the King George meant Arkle carried 12st 7lb and that his six rivals carried between 11st 7lb and 11st.

Second-favourite behind 2-9 Arkle was the six-year-old future Gold Cup winner Woodland Venture under Terry Biddlecombe with Dormant, ridden by the greatest jockey never to be champion, Jeff King, next best at 10-1.

The signs were ominous from soon after flagfall. Arkle was not great at the second fence and, most uncharacteristically, began to hang away from the rails and his off-fore.

Something was amiss, although probably few in the 16,000 crowd sensed the fact. But passing the stands after a circuit Dormant took up the running.

Arkle wrested back the lead but made a bad error at the 14th and rounding the bend into the straight – two fences back then – Biddlecombe and Woodland Venture looked to have him cold.

But Woodland Venture rooted the second last and fell. Across the islands there must have been roars none could suppress as the greatest chaser in history came down to the last ten lengths up on Dormant and cleared it with a terrific jump.

It was all over bar the shouting. But on the flat the world turned upside down as Arkle’s pain began to tear into him, his stride shortening chronically with every yard.

King never gave up on anything and with 50 yards to run he collared Arkle in front of the stunned stands and Himself was beaten an agonised and agonising length.

The shouting had turned to ash in the throat. I recall a nine-year-old’s shock at finding out Arkle had been beaten and remember my dear Dad coming up to say goodnight to his son later that evening and saying that we had probably seen the last of him.

That wise and mesmerising jingoist Rudyard Kipling had got it right in his famous poem Recessional written in 1897 which, in addition to the immortal refrain “Lest we forget, Lest we forget” had this to say:
“The tumult and the shouting dies,
“The Captains and the Kings depart:
“Now stands thine ancient sacrifice,
“An humble and a contrite heart.”

He was all heart that day after Boxing Day 1966, galloping on through god only knows what pain. The wonder as warrior.

Barely able to walk, Arkle was loaded into the horse ambulance and taken to the racecourse stables which were to be his home for the next two months.

He had broken his pedal bone. You will have to make your own estimate of how deep he had to dive in the reservoir of courage to have put up the performance he somehow manged to cobble together that afternoon.

Defeated and badly injured Arkle was front-page news. He had long become racing’s first media superstar and both newspapers and television followed his every move.

Get-well letters and presents inundated Kempton. He was adored in Britain but in his native land Arkle was worshipped just this side of idolatry. Perhaps beyond.

The Ireland of the mid-sixties was a very different place to that we know now – palpably poorer, less outward looking and lacking the wonderful confidence and self-belief of today.

It is neither far-fetched or fanciful to argue that Arkle wove a strong thread in the rediscovery of Irish national pride. Seldom, indeed surely never, has a horse ever done so much for the land of his birth.

As he recuperated and eventually returned home speculation raged about when Arkle would race again. In the spring of 1968 it looked as if he would return and there came a day when Dreaper took him to Naas to school over hurdles with stablemate Splash.

After they had jumped the hurdles Taaffe walked him over to Dreaper who asked: “All right Pat?”
The reply came: “No, sir.”
“When do you think he will be right?”
“I think he will never be right, sir.”

That morning marked the commencement of the curtain being drawn. On October 8, 1968, the Duchess of Westminster, who used to ride Arkle out regularly at her home during his summer breaks, issued a statement to the effect he would never race again.

No more on course would those ludicrously pricked ears be seen again. Magical in action, he was always the most magnificent apparition in the paddock.

In the early days of 1970 he began to deteriorate. Arkle was always staggeringly well served by the human cast who surrounded him and they did not falter or fail him at his end.

On May 31 the Duchess went into his box at her Irish home Bryanstown and found him lying down. Soon after, an injection was duly administered and the breath of life left him.

He was buried near the main house at Bryanstown and his stone bears his name and dates.

One is put in mind of WH Auden’s intoxicant of a poem “In Memory of W B Yeats” and its matchless line “Earth, receive an honoured guest”.

Under the rough sod of his own land lay the horse honoured in life, death and memory ever since.

All eyes in the stands may have been on Arkle that day at Kempton, but his owner Anne, Duchess of Westminster, had two interests in the race. Arkle had been named by his vastly knowledgeable owner after a mountain on her Scottish estate. She also owned his King George rival Foinavon, who she named after another mountain a few miles to the north.

Foinavon was a monkey, and one of Betty Dreaper’s favourite stories was of the day he took a bad fall at the now defunct Baldoyle racecourse. Tom and Betty Dreaper hared across the course to where Foinavon lay prostrate. But he was neither dead nor winded, he was just lying there having a pick of grass, the idea of expending energy on the tedious business of standing up too much for him.

The Duchess got shot of Foinavon who is famous for the greatest shock in Grand National history when winning the 1967 at 100-1 having been the sole survivor of the apocalyptic moment when the sky fell in at the 23rd fence.

FIRST PUBLISHED 6:00PM, DEC 19 2016
Arkle's pain began to tear into him, his stride shortening chronically with every yard