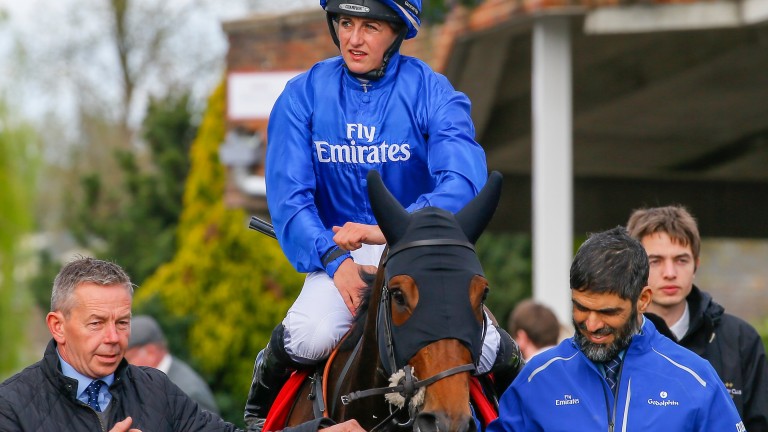 Arabian Hope is in top shape for the Group 3 International Istanbul Trophy
Mark Cranham
1 of 1
By Richard Birch 6:14PM, SEP 2 2017

Saeed Bin Suroor holds realistic hopes of a Group-race double at Veliefendi in Turkey on Saturday with Leshlaa and Arabian Hope.

Fifth in the Britannia Handicap at Royal Ascot in June, the three-year-old is hard to place in Britain off his official rating of 103, and this 1m2f Polytrack event looks a suitable opportunity. Jimmy Quinn rides.

“Leshlaa is in good form," said Bin Suroor. "He's improving physically all the time and I think conditions in Turkey will be suitable for him.”

The likely favourite is the Francois Rohaut-trained Qurbaan, who was a close third in the Grand Prix de Vichy last time.

The veteran Belgian Bill, a regular at the meeting and winner of this race 12 months ago, is back to defend his crown under Hector Crouch and stave off possible retirement.

A well-known globetrotter, who has also triumphed at Meydan, Belgian Bill performed disappointingly at Doncaster last time but could be perked up once again by long-distance travel.

“He’s been an absolute star for us,” said Baker. “He won the race last year but it looks more competitive this time.

“Having said that, he’s a 10lb better horse when he jumps onto a plane and I’m hoping he runs well.

“We’ve got to be realistic, though. He’s a nine-year-old who holds no secrets from anyone. How he performs in Turkey could determine whether it’s the end of the road for the old boy.”

The Archie Watson-trained Absolute Blast, runner-up to Laugh Aloud in Epsom’s Group 3 Princess Elizabeth Stakes in June, completes the British trio. She will be partnered by Ed Greatrex.

Arabian Hope is likely to go off a warm order for the Group 3 International Istanbul Trophy under Gerald Mosse, also worth nearly £100,000 to the winner.

Third to Roly Poly in the Group 1 Falmouth Stakes at Newmarket in July, Arabian Hope has pleased Bin Suroor recently.

“She's doing well,” he said. “Although she disappointed last time at Deauville, she came out of that race well, and I think this race is right for her.”

FIRST PUBLISHED 6:00PM, SEP 1 2017
He is improving physically all the time and I think conditions in Turkey will be suitable for him