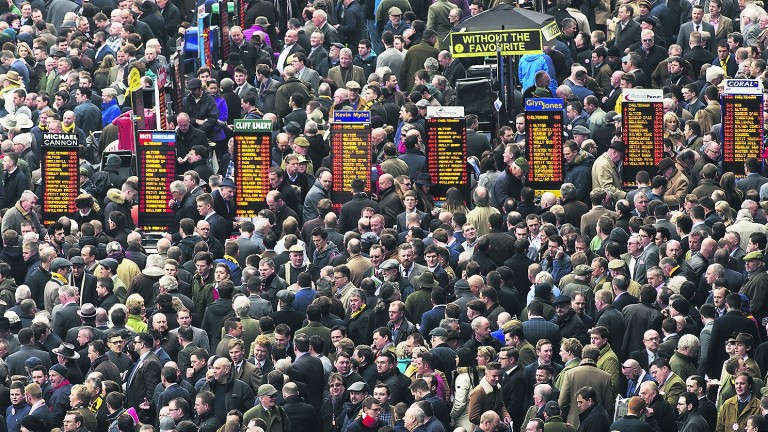 Bookmaker Francis Hyland took just 57 bets at Leopardstown last Sunday. Those wagers amounted to €720 and he paid out €810 in winnings. This is the life of a course layer in the modern betting world.

On-course betting turnover at Leopardstown's most recent meeting was a dismal €375,745, down almost 30 per cent from the same fixture in 2016. Rewind to 2008 and the turnover for the meeting in question was €1.7 million.

Despite the fact that 1.32 million people attended Irish meetings in 2016, the figure for on-course betting plunged by 5.5 per cent from €69.3m in 2015 to €65.5m and Hyland has described betting on jump racing in Ireland as a 'disaster' for bookmakers.

"I took 57 bets in total at Leopardstown. That came to €720 and I paid out €810. I was down €90 for the day. That's the way it's gone. Why on earth would anybody bet on course? If you bet online, you get guaranteed odds, double result, money-back specials. There is no incentive to bet on course anymore," Hyland explained.

"My policy as a bookmaker was always to take on the favourites but you can't do that anymore. Too many of the odds-on shots win. I decided to price Yorkhill at 1-5 on Sunday so I wouldn't take a bet.

"Over Christmas at Leopardstown, I took on all the odds-on shots and I think five of the six that I took on won. Summer racing is slightly better, as is the Flat, but betting on National Hunt racing from a bookmaker's perspective is a disaster."

Speaking about the decline in on-course betting, HRI chief executive Brian Kavanagh said: "Racecourses and bookmakers are working closer together to improve the way that this betting service is delivered, including for example, the positioning of bookmakers in corporate facilities and other areas away from the traditional betting ring. HRI will continue to assist in any way it can and recently announced a reduction in the on-course bookmakers levy."

Hyland appreciates the movement of some bookmakers to corporate hospitality suites is a factor but says the abolition of betting tax is to blame for the current state of affairs.

"The abolition of betting tax has destroyed course bookmakers. Gambling is the only leisure business in the world without tax. Of course, bringing extra money in through betting is corporate areas is a good move but the problem lies far deeper. I have reduced my race meetings by half and I will retire in two years time, before I am 70," he added.