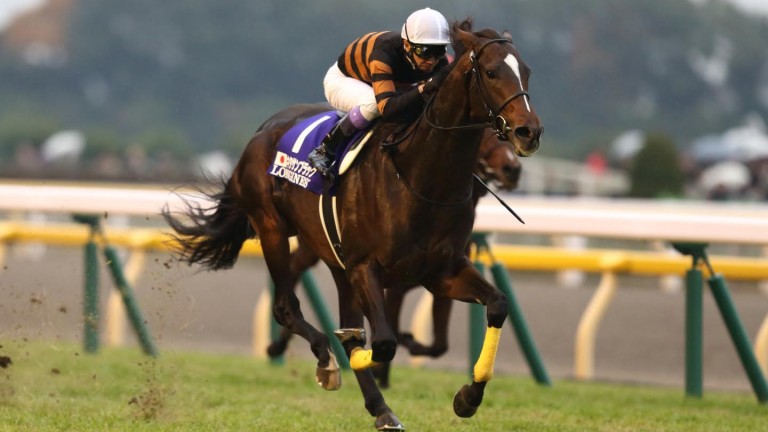 Kitasan Black: could be heading to Ireland later this year
Masakazu Takahashi
1 of 1
By Scott Burton 2:21PM, DEC 24 2016

Memories of the classic 2005 race fought out by Christophe Lemaire and Yutaka Take will be evoked as the top jockeys face off again in a race that is partly composed by a public vote.

In 2005 the 50th edition of Japan's season-ending championship provided one of the country's most famous finishes, when Lemaire and Heart's Cry held off Take on Triple Crown winner Deep Impact.

The roles could be reversed if Take attempts to repeat the freewheeling Japan Cup success of Kitasan Black.

Connections of both horses have mooted European campaigns next autumn, while Lemaire has the further incentive of his close battle with Keita Tosaki to be crowned Japan's champion jockey, which is also decided on this Christmas Day card.

"He's a great horse, easy to ride, and with so much potential," said Lemaire of Satono Diamond. "Obviously Kitasan Black is strong but I want to make it a match race with him and my horse."

Take's pre-race comments suggest he doesn't have to lead but, having once again been drawn in stall one, a repeat of Tokyo tactics would not be a surprise.

"In the Japan Cup another horse didn’t want to lead, so I took the initiative, and the responses I got - including in the final straight - were great," said Take.

The Arima Kinen field is assembled partly on the basis of a public vote, a factor which no doubt contributes to making it the world's biggest betting race. Last year single-race turnover of just above ¥41 billion yen (about £285 million) was recorded.

Kitasan Black easily topped the poll with more than 137,000 votes.

"It feels good to be associated with the number one horse the fans have chosen," said Take.

Gold Actor attempts to repeat last year's success, while two European jockeys on short-term licenses will be going without their Christmas dinner to ride outsiders in the race.

FIRST PUBLISHED 1:02PM, DEC 24 2016
The Arima Kinen field is assembled partly on the basis of a public vote, a factor no doubt in making it the world's biggest betting turnover race