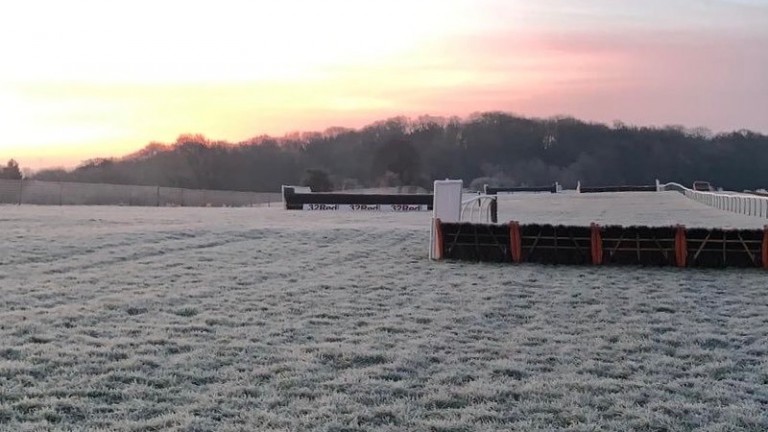 Tuesday's jumps meetings at Leicester and Exeter are under threat from frost with 8am inspections arranged at both tracks.

The courses were described as frozen in places on Monday morning after temperatures dropped to as low as -4C overnight and similarly freezing conditions are forecast for Tuesday morning.

Leicester's clerk of the course Jimmy Stevenson said: "Hopefully the forecast is right as we're set to get temperatures between -2C and 0C. It's due to cloud over in the night and if that happens we should be okay."

Leicester has been forced to cancel five of its last eight fixtures due to waterlogging and the loss of another meeting would be deeply frustrating.

"The water has gone and now we're frozen. Who'd be a clerk of the course? It's no wonder I've got no hair left," said Stevenson.

"The yearly rainfall average in Leicester is 24 inches and last year we had 38.5. The reason we're frozen is because there's so much moisture in the ground."

Exeter lost its meeting last Tuesday, and clerk of the course Daniel Cooper is optimistic the fixture won't go the same way.

"We're looking at a slightly warmer forecast tomorrow with a bit of cloud cover, which is in our favour," he said. "We got down to -4C in the back straight at 7.45am this morning, but we've just walked the home straight at 9.30am and that part of the course is raceable.

"We'll be deploying fleece on the vulnerable areas this afternoon."

Temperatures look set to rise ahead of Trials Day at Cheltenham on Saturday, with a high of ten degrees on Wednesday and raceday itself. Doncaster's Sky Bet Chase meeting at the weekend is another that looks set for milder weather.

The going at Cheltenham is currently soft, while it is soft, good to soft in places at Doncaster.