Legendary Cue Card 'as good as ever' for Gold Cup bid 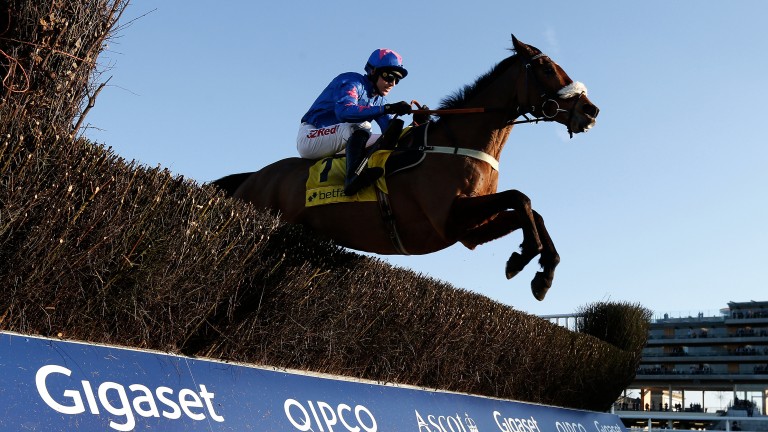 Colin Tizzard believes Cue Card is every bit as good as he ever was as he bids to make amends for last year’s fall at the third-last fence, a fall that arguably cost him not just the sport’s most coveted prize but Jockey Club Racecourses’ £1 million triple crown bonus.

That confidence will be reassuring to the 11-year-old’s legion of followers because with his fast-improving stablemate Native River and dual Gold Cup runner-up Djakadam heading the field, Cue Card will need to be at the very top of his game – and there’s no escaping the cold fact no horse older than ten has won this since What A Myth in 1969.

Tizzard, who recalls being inspired by seeing Captain Christy, The Dikler and Pendil from the last fence as an 18-year-old farmer, admits Cue Card holds a special place in his heart and confesses he has never known a feeling to match the time when his son Joe drove him home in front in the Champion Bumper on just his second start seven years ago.

“When Joe rode him here in the Champion Bumper I’ve never experienced that type of emotion before or since, and he’s kept on doing it for seven seasons,” he said.

“We did miss two festivals with him, so we’ve had downers, but they were only little problems, right before the festival, and luckily he’s been good enough to come through them.”

Asked what winning would mean to him after last year’s fall, Tizzard said: “I’d just love to do it for the horse. We had it in our mind last year was perhaps his chance, as a ten-year-old, and maybe he wouldn’t be as good this year, but he’s come out as good as he ever was.

“He’s a really good Grade 1 horse and I don’t think he’s wilting at all. If you saw him work on the gallops you wouldn’t dare work him with Native River, that’s for sure.”

Jockey Paddy Brennan, devastated 12 months ago by Cue Card’s fall, has since accepted a degree of blame, but it has not come from Tizzard.

Tizzard said: “The Cheltenham Gold Cup is a very big strain on an owner, trainer, horse and jockey. I’m sure if Paddy had his time again he wouldn’t be where he was at that time, but if you look four fences earlier Cue Card was off the bridle not going anywhere, then a gap opened and he took off.

“None of us ever thought he’d fall as he’s always been a very neat and accurate jumper. It was a horrible fall and I was just glad to see him get up, but Paddy took it that he was in the wrong place at the wrong time. There’s nothing wrong with that and I don’t want to wind Paddy up about it – he’s wound up enough!

“There’s nobody better than Paddy, but it will be a test for him.”

Cons Still a nagging stamina doubt, and no horse as old has won for nearly 50 years