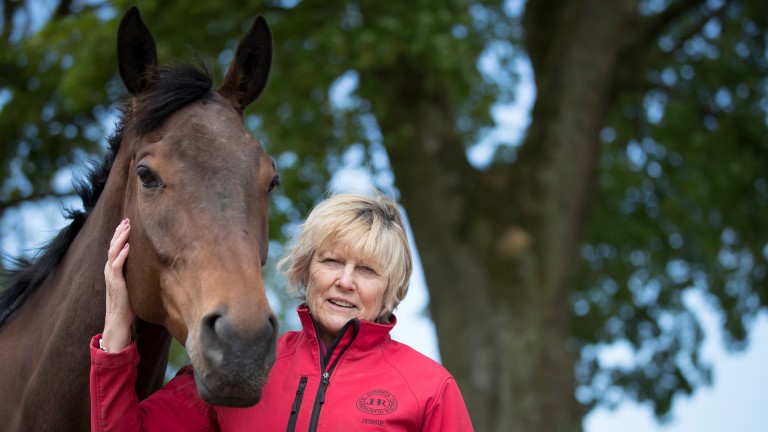 Jessica Harrington with Torcedor, who has emerged as an Ascot Gold Cup contender
Patrick McCann
1 of 1
By David Jennings 7:49PM, JUN 7 2017

Jessica Harrington, Willie Mullins and Joseph O'Brien have all assembled powerful armies for the royal meeting and, with Aidan O'Brien leading the Irish charge, it is hardly surprising Paddy Power are offering just 5-4 on ten or more Irish-trained winners over the five days.

Ten was the record-breaking number of Irish winners at Royal Ascot in 2016 and Ladbrokes go 5-1 for that to be smashed this year.

Ladbrokes' Nicola McGeady said: "Along with Aidan O'Brien, Jessica Harrington has some hot two-year-olds, while Willie Mullins always does well in the staying races, so it looks like Irish-trained horses could rule the roost."

No trainer has ever completed the Cheltenham-Ascot Gold Cup double in the same year – only Vincent O'Brien has won both races in a career (four Gold Cups at Cheltenham, one at Ascot with Gladness in 1958) – but, three months after Sizing John soared to glory in the Cotswolds, Torcedor will try to make history for Harrington. He has already beaten the defending champion and hot favourite Order Of St George in the Vintage Crop Stakes at Navan.

"We have a great team heading over to Ascot and it's very exciting," Harrington said. “Torcedor has done very well since arriving here. He had a wind operation over the winter and that seems to have helped him. I think he'll stay. He's versatile and we've been dropping him in when working him at home with a view to getting the trip at Ascot. He seems very well."

With unbeaten juveniles Alpha Centauri (Albany) and Brother Bear (Coventry) both favourites for their respective races, a first Royal Ascot winner is on the cards for Harrington.

"If I got a winner at Royal Ascot, it would be another landmark success and I would be absolutely delighted," she said.

"Alpha Centauri is a very big filly and weighs over 500kg, which is massive for any horse but absolutely massive for a two-year-old filly.

"She was a big filly coming here and she has never looked back since she got here. She's well balanced and has done very well. The Albany is another step forward and it will be a tougher race but you can't fault what she has done already.

"It's all systems go for the Coventry with Brother Bear. To skip across the fast ground at Leopardstown and then win at the Curragh on heavy ground from a bad draw was very good. I'm very happy with him." 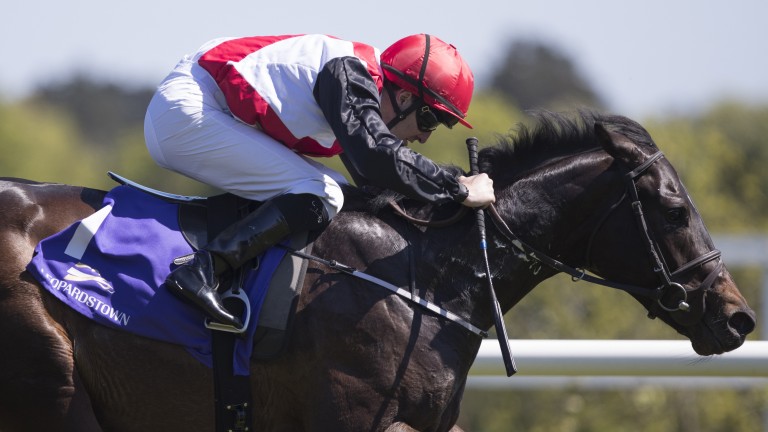 The Jessica Harrington-trained Brother Bear makes a successful debut under Colm O’Donoghue
Patrick McCann (racingpost.com/photos)
He might be a few years younger than Harrington but Joseph O'Brien is also eager to break his Royal Ascot duck and is hoping the unbeaten True Blue Moon might be the one to make the breakthrough in either the Norfolk or the Coventry.

"I was thrilled with True Blue Moon at Naas. He showed he had really improved from his first to second start and I'm hoping he'll make similar improvement from his second to third start. He has lots of pace," O'Brien said.

"Motherland might go for the Queen Alexandra, while I have the Albany in mind for Now You're Talking. We hope to have a few for the handicaps as well, so it looks like we'll have a very nice team for Royal Ascot. I'm looking forward to it." 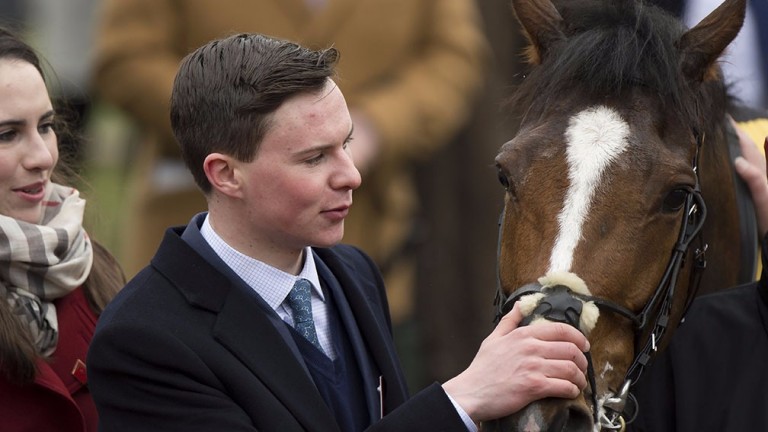 Joseph O'Brien: "It looks like we'll have a very nice team for Royal Ascot"
Edward Whitaker
Willie Mullins has added recent wide-margin Curragh handicap winner Whiteout to his squad and she could contest the Ascot Stakes on day one, a race won 12 months ago by Irish raider Jennies Jewel.

"Whiteout was very good at the Curragh and I have my eye on the Ascot Stakes for her now. She has been pleasing me and that would look to be a nice race for her," Mullins said.

"We're likely to have quite a few runners and it's a meeting I like to target. We hope to run a couple in the Gold Cup and I'll have a few for the handicaps all going well. I'm looking forward to it." 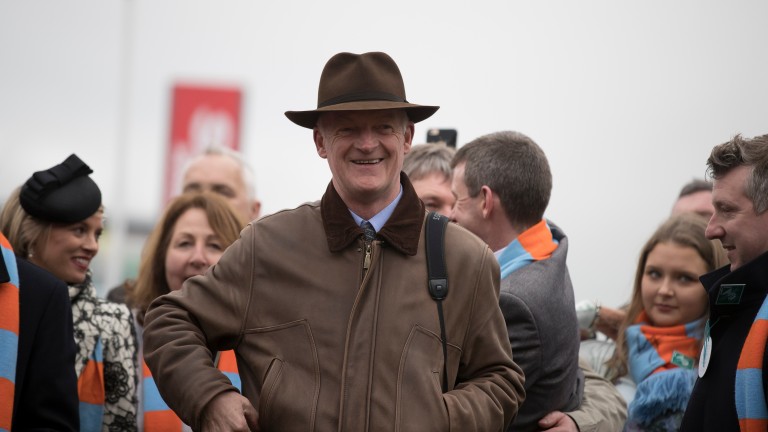 Willie Mullins: "We're likely to have a few runners"
Patrick McCann
Mullins became a Classic-winning trainer for the first time last September when Wicklow Brave bravely batted away the challenge of Order Of St George in the Irish St Leger at the Curragh and the likes of Arctic Fire, Renneti, Diakali, Thomas Hobson and Max Dynamite are all under consideration for Royal Ascot.

Gordon Elliott, who won the Queen Alexandra Stakes last year with Commissioned, is also likely to have his sights set on some of the handicaps, as will Tony Martin, so it is safe to say the Irish team heading to Royal Ascot has never been stronger.

Paul Binfield, spokesman for Paddy Power, says the firm are bracing themselves for an Irish invasion.

Binfield said: "The Irish are having the time of their lives at the big festivals. Irish-trained horses have already won three of the four Classics in Britain and with Jessica Harrington having so many fancied runners, to go with Aidan's army, it looks like the Irish will have another wonderful week at Royal Ascot."

ONES TO WATCH FROM THREE STABLES

Alpha Centauri
The giant daughter of Mastercraftsman has won both of her starts at Naas in impressive fashion. She is on course for a crack at the Albany, for which she is a hot favourite. Described by rider Colm O'Donoghue as “an exciting filly who is filling into her frame all the time”.

Brother Bear
An impressive winner on his debut at Leopardstown, the son of Kodiac justified favouritism in the Marble Hill Stakes at the Curragh by three lengths and was immediately installed favourite for the Coventry Stakes. Versatile with regard to ground and big things expected.

Torcedor
Ex-David Wachman stayer who has won both starts since joining Harrington. Given that he has already lowered the colours of Ascot Gold Cup winner and current favourite Order Of St George in the Vintage Crop Stakes at Navan, a valid case could be made for him being overpriced at 16-1 for the staying showpiece. 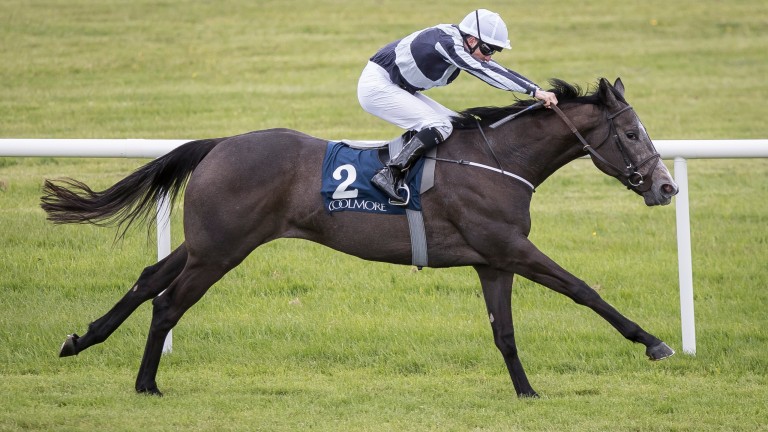 True Blue Moon
Followed up an impressive debut success at Dundalk by swooping late to land a Listed event at Naas last month. Looks to have bundles of speed and would be a leading fancy for the Norfolk if connections decide to go down that route.

Motherland
All about stamina and warmed up for Royal Ascot with an encouraging third to Order Of St George in the Saval Beg Stakes at Leopardstown. Has the option of the Ascot Stakes but the Queen Alexandra Stakes might suit better.

Now You're Talking
Remains a maiden but both of her displays to date have been full of promise. Bumped into Alpha Centauri on her debut and only narrowly denied last time at the Curragh, she could go under the radar in the Albany and surprise a few.

Whiteout
Wide-margin winner of a Curragh handicap from the front last month, this Grade 1-winning hurdler looks an ideal type for the Ascot Stakes and it is worth noting that the same race was won by a mare 12 months ago in the shape of Jennies Jewel. Looks a leading contender.

Arctic Fire
Classy hurdler who remains unexposed on the Flat. Showed a stunning turn of foot to land the County Hurdle at the Cheltenham Festival and could have plenty to offer back on the Flat. Had a light winter and should be fresh.

Renneti
Unpredictable but hugely talented when on song. Can be tricky at the start and often spoils his chance by refusing to settle but could be a big player in one of the big staying prizes if he shows up on his best behaviour. Officially rated 105 and always dangerous to underestimate.

FIRST PUBLISHED 7:01PM, JUN 7 2017
We have a great team heading over to Ascot and it is very exciting