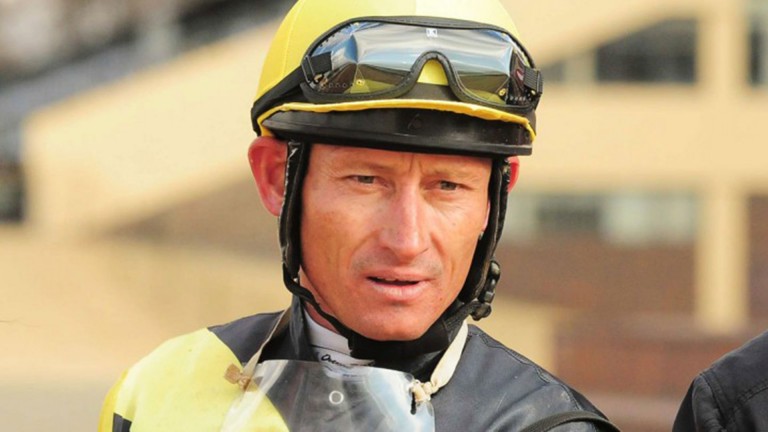 Leading South African jockey Gunter Wrogemann is in the intensive care unit of Johannesburg’s Milpark Hospital after being kicked in the face in a fall at Turffontein on Sunday.

He underwent a four-hour operation on Wednesday after his jaw was broken in two places and his arm was crushed.

His wife Samantha said: “The operation took much longer than anticipated. I have so far only seen the anesthesiologist who says the operation went well. I am happy that the surgery is over and the road to recovery can commence.

“Gunter will remain under heavy sedation, which is a good thing to allow him to heal and remain calm for the next few days.”

Wrogemann was on the rails five lengths off the leader in a maiden when his mount Ancient Code fractured a front fetlock and came down.

“When Gunter was lying on the ground the horse was struggling to get up and she got him full force in the face,” said trainer and family friend Louis Goosen.

However, his wife said: “The blood flow has improved so he will not need it operated on. They have also taken the arm out of suspension and ice packs.”

Wrogemann had been on the crest of a wave. He rode his 100th winner of the season last week and, after winning the Group 1 Daily News on Surcharge at Greyville on Saturday, he said: “I have been blessed. It has been a phenomenal season – which goes down to all the support I get from trainers and owners – and long may it continue.”

It has been a bad 12 months for South African jockeys. Last August Alec Forbes died of pneumonia and organ failure just hours after riding a winner at Scottsville, and in April current champion Anthony Delpech damaged his spinal cord in a fall in the SA Classic at Turffontein.

Four-time champion Anton Marcus is currently out with a broken wrist, Piere Strydom (six times champion) is sidelined with a neck problem and former champion Gavin Lerena with a broken shoulder-blade.

For all the latest international news, visit racingpost.com

FIRST PUBLISHED 1:03PM, JUN 8 2018
Gunter will remain under heavy sedation, which is a good thing to allow him to heal and remain calm for the next few days