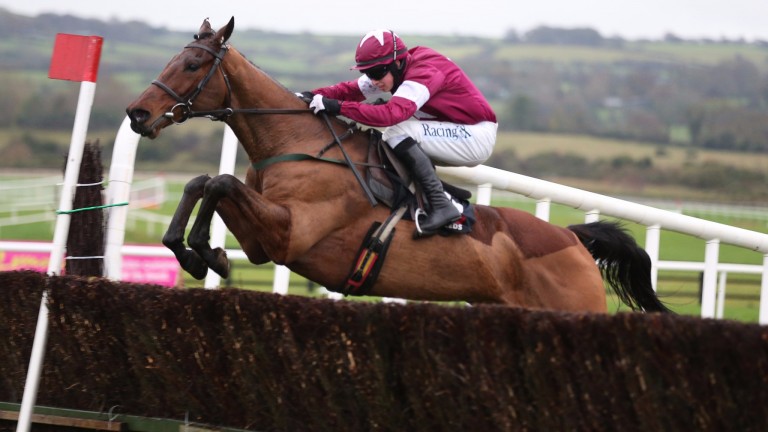 Outlander: having his first start for Gordon Elliott under a Grade 1 penalty
CAROLINE NORRIS
1 of 1
By Tony O'Hehir 6:00PM, NOV 4 2016

Paul Nicholls has virtually made this race his own in recent seasons and he is represented today by Le Mercurey, a dual winner at this level as a novice last season.

Britain's champion trainer has won every running of the race bar one since 2008. Two years ago his amazing sequence was broken when Wonderful Charm proved no match for Don Cossack, but Ptit Zig restored his monopoly 12 months ago.

Le Mercurey's six rivals include two Grade 1-winning novices in Outlander, who will be having his first run for Gordon Elliott, and the Andy Lynch-trained Zabana.

Both will be appearing for the first time since the Punchestown festival in April, when Zabana landed the Grade 1 Growise Champion Novice Chase, with Outlander two lengths behind in second.

Outlander had his big day as a novice at Leopardstown in February when winning the Grade 1 Flogas Novice Chase for Willie Mullins.

Gordon Elliott, trainer of Outlander and Shadow Catcher
Outlander is having his first run for us and we're happy with him. He has a Grade 1 penalty but it looked a suitable race to start his season. Shadow Catcher looks up against it and if he can earn some prize-money we'll be happy.

Andy Lynch, trainer of Zabana
He's very well and ready to roll. The trip might be a bit on the short side but otherwise I'm happy with him. He worked at Leopardstown a couple of weeks ago and went very well, and he's done well since. The ground should be just right for him.

Paul Nicholls, trainer of Le Mercurey
I think he'll get further but he's worked well and I'm looking forward to it.

Henry de Bromhead, trainer of Sub Lieutenant
He jumped well and won nicely at Limerick last month on his first start for us. This will be a step up for him but he's in good form. We're going to learn more about him and where we might go.

Noel Meade, trainer of Net D'Ecosse
We haven't had him long and are still learning about him. He hasn't run since last Christmas so we'll have to see how things go.

FIRST PUBLISHED 6:00PM, NOV 4 2016
The trip might be a bit on the short side but otherwise I'm happy with him