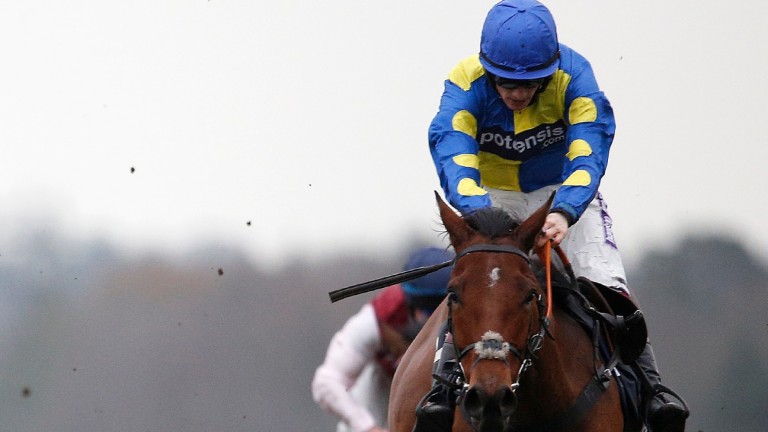 Young, progressive chasers aged between five and eight have dominated this £100,000 handicap in recent years, and there are several who fit that profile here.

The Paul Nicholls-trained six-year-old Le Mercurey ran a blinder when second to Many Clouds at Aintree last time and is sure to prove popular, as will Minella Daddy, who is seeking a hat-trick after fluent victories at Ffos Las and Ascot.

Peter Bowen’s charge looks a rapidly progressive sort judged on a recent seven-length course and distance success over Tinker Time. This demands more off an 11lb higher mark, but he seems sure to run well.

The Nicky Richards raider Eduard, fourth in the Ryanair Chase to Uxizandre in 2015, is likely to prove much sharper for a comeback fourth of seven to Royal Regatta in a Grade 2 chase over this course last month, and takes a significant drop in class.

Alan King, trainer of Annacotty
He has lost a bit of zip over two and a half miles so I want to step him up in trip as I think things might come easier for him over further. He was flat out last time in the BetVictor Gold Cup at Cheltenham where it was not really soft enough at that distance.

Paul Nicholls, trainer of Le Mercurey and Irish Saint
Le Mercurey ran very well at the weights when second to Many Clouds at Aintree last time. He’s gone well at Ascot before, and has a chance. Irish Saint missed last season, and ran a tidy race on his comeback at Cheltenham. That was a prep for this race, and I expect him to go well.

Venetia Williams, trainer of Tenor Nivernais
He won at this course last year on softer ground, and we hope he’ll run well in what is always a competitive race.

Nicky Henderson, trainer of Triolo D’Alene
He ran very well in the Hennessy, and has absolutely everything in his favour. You would have to be confident he can put up a bold show. I think this is his time – he has an outstanding chance of finishing in the first four, that's for sure.

Harry Fry, trainer of Fletchers Flyer
It's no secret that we are working back from his targets in the spring, when we hope to run him in the 4m National Hunt Chase at Cheltenham and the Irish National. This is very much his starting point, but he’s very well in himself – possibly better than we expected him to be at this stage – and he’s a winner at Ascot.

Anthony Honeyball, trainer of Regal Encore
He's been a bit unlucky the last twice, especially at Cheltenham where he was nearly brought down on two occasions. He wasn't right in the Hennessy and was pulled up quickly and we didn't learn much at Cheltenham so we don't really know where we are with him. It's a £100,000 race, and he has the ability to get involved.

Colin Tizzard, trainer of Fourth Act
He's run two very good races so far this season, and we've been waiting for this. If he runs the same sort of race, he'll be thereabouts and one of these day he'll win one like this.

FIRST PUBLISHED 6:00PM, DEC 16 2016
Le Mercurey ran very well at the weights when second to Many Clouds at Aintree last time. He's gone well at Ascot before, and has a chance