York absentee Cracksman set to head straight for the Arc 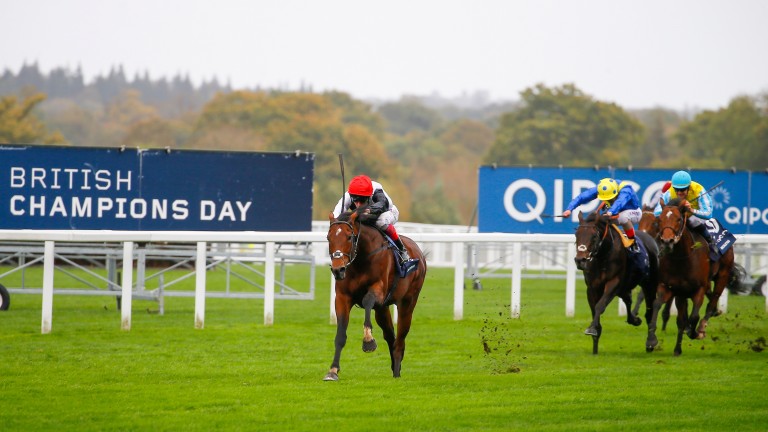 John Gosden has revealed that Cracksman is unlikely to be seen again in public until the Qatar Prix de l'Arc de Triomphe on October 7, when it is hoped he will join last year's winner Enable in a dual assault on a race the stable also won with Golden Horn in 2015.

Last year's sensational Champion Stakes winner, who in the 2017 Longines World's Best Racehorse Rankings emerged as the world's top three-year-old and the best horse in Europe, has had a frustrating season, notwithstanding his further Group 1 wins in the Prix Ganay and the Coronation Cup.

His odds-on second to Poet's Word in the Prince of Wales's Stakes after a worryingly unimpressive effort at Epsom reads much better now than it did at the time, but he has since missed the King George at Ascot and the Juddmonte International at York owing to fast ground.

Time is running out for a prep race before Longchamp, but Gosden is not worried.

He said: "The ground was a bit quick for Cracksman to run in the Juddmonte and we may take him straight to the Arc as he goes well fresh and is not the kind of horse that needs a prep.

"The idea would be for him to take in two races in October and after the Arc point him to have another crack at the Champion Stakes. Hopefully before then we can get him on some nice ground on the Limekilns, although there does not seem to be much of that at the moment."

While Cracksman has managed three appearances this year, Enable has not been seen on a racecourse since last year's stunning win in the Arc, when it was run at Chantilly. She too had options this week at York, where both won last year, but is now earmarked for a lower-key return in Kempton's Group 3 September Stakes on September 8.

Enable is clear favourite for the Arc at a top-priced 5-1 with bet365 and Betfair, while Cracksman is disputing second spot with Crystal Ocean at a general 7-1.

FIRST PUBLISHED 11:04AM, AUG 22 2018
We may take him straight to the Arc as he goes well fresh and is not the kind of horse that needs a prep