As sellers at this week’s Tattersalls Horses in Training Sale know, setting a realistic reserve for your asset is essential for achieving the result that you want.

So, perhaps a trip to Newmarket in the future may be required for the owner of a racing plate worn by the legendary Frankel, which went unsold at auction on Thursday having been set a reserve price of £15,000-£20,000.

Worn by Frankel during his scintillating ten-length triumph in the Royal Lodge Stakes as at two-year-old at Ascot in 2010, the shoe went under the hammer at Bonhams auction house in Edinburgh. 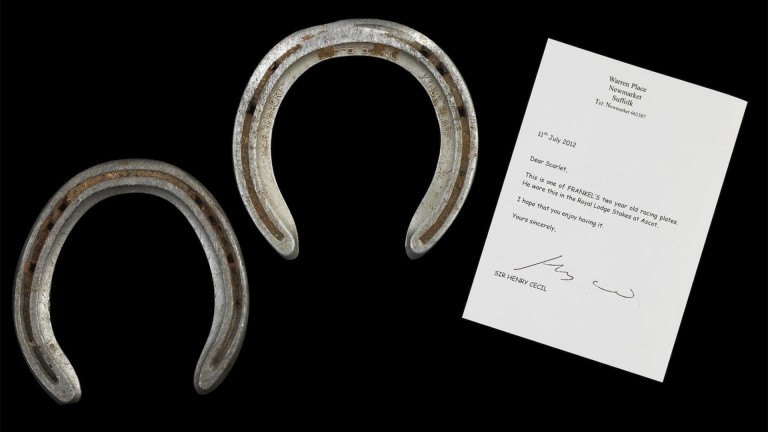 Frankel plates: the star's training shoe (right), the plate he wore in the Royal Lodge and the letter from the late Sir Henry Cecil

The shoe had been a gift to the daughter of an owner in trainer Sir Henry Cecil’s yard at the time, and came with a note which reads: “This is one of Frankel's two-year-old racing plates. He wore this in the Royal Lodge Stakes at Ascot. I hope that you enjoy having it. Yours sincerely, Sir Henry Cecil,” along with the trainer’s signature.

However, despite being loved by racing fans worldwide, Frankel’s celebrity failed to generate into sufficient interest in the auction with the lot failing to sale on Thursday morning.

Charlotte Canby, spokesperson for Bonhams, said: “We didn’t have that much interest in the Frankel shoe. I recall Red Rum’s head collar went for £1,500, so perhaps we’re looking at under the £5,000 mark for the shoe. There may be an option to try again in the future."

FIRST PUBLISHED 4:51PM, OCT 31 2019
This is one of Frankel's two-year-old racing plates. He wore this in the Royal Lodge Stakes at Ascot. I hope that you enjoy having it