Williams: Buywise may struggle to bounce back after Sandown fall 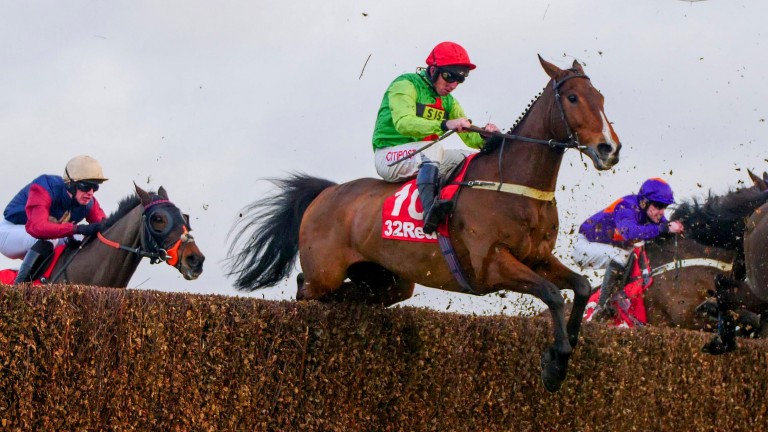 Evan Williams reports that Buywise is none the worse for his heavy fall at Sandown on Saturday but warned he fears the popular chaser may not hit the heights again.

The 12-year-old was in second place when he crashed out at the last fence in the £100,000 veterans' chase final, which he had won last year under Leighton Aspell.

His trainer did not think he would have caught winner Houblon des Obeaux but said on Sunday: "Whether he'd have won or not is irrelevant because he fell and the main thing is he's sound and happy.

"I was very surprised with how he ran, he's been on the downward slope and I was overjoyed with him, but whether he can reproduce that again after such a fall, I don't know. It will be very difficult I'd imagine.

"He's been in trouble since last year and the problem with veterans' chases is that people get a false view of form. I couldn't think of any horse that went into yesterday's race in form and I don't think the winner bounced back to his best. I think that probably 90 per cent of the horses haven't run to any type of form."

Buywise has attracted quite a following thanks to a series of near-misses in big chases, dating back to the bad mistake two out that may have cost him victory in the novice handicap chase at the Cheltenham Festival in 2014.

Gallant loser Buywise who the public have taken to their hearts

That support slightly mystifies Williams, who said: "If you had a brilliant horse, a Grade 1 horse, you can understand people's affection, but I had people coming up to me yesterday after his fall and there was one woman crying. Why do people love him? I think Brits love a gallant loser.

"You get blown away with it and you get a bit proud with people thinking the horse is special. I don't know if he deserves the attention, all he's ever done is broken everybody's hearts!

"He's a wonderful old boy and if I had a yard full of horses like him I'd be very happy, but I'd be greyer and balder than I already am!"

Charlie Longsdon felt the ground was too quick for Pete The Feat but hopes there could be a last hurrah for the 2017 winner and 2018 runner-up, who was pulled up on his first run as a 15-year-old.

"I'm sure discussions will start over the next month or so, but at the moment I've got no reason to stop with him," said the trainer on Sunday.

"Will he be in the race next season? I can't imagine he will – I'm sure he'll be retired by then – but it would be quite nice if we could find a race for him to go out on a winning note.

"Speaking to a couple of jockeys leaving the course yesterday, they said, 'He'll still win another race, he's still got the zest for it'.

"He's been running to his old form and I thought he should almost have won at Sandown last month, he got taken out at the middle Railway fence and was beaten only six lengths. It's still there and he still wants to do it."

If you enjoyed this, you may like to read:

Focus on popular chaser Pete The Feat – or should that be The Boss?

FIRST PUBLISHED 3:54PM, JAN 6 2019
I had people coming up to me yesterday after his fall and there was one woman crying