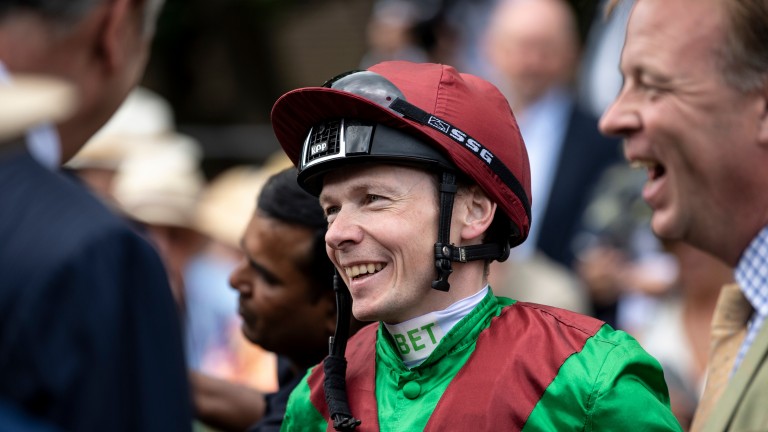 Jamie Spencer: does not share the same affection when Frankie Dettori has a great day
Edward Whitaker (racingpost.com/photos)
1 of 1
6:00PM, MAY 22 2021

I couldn't believe the price. She was fourth in a Ribblesdale and at one stage she was the 20-1 outsider. I'm not a betting man but I had £10 each-way – that's me!
Peter Chapple-Hyam expresses his surprise at the 16-1 starting price of Ayr winner Bharani Star on Wednesday

I've always said to my mates never cash out, so I look a bit daft now, but I had to take some of it – it was too big not to
Punter Paul Dean explains his rationale behind cashing out his potentially life-changing accumulator in March

I don't want to be racing on Mondays or Tuesdays. Being a busy fool is pointless. It's crap racing and crap prize-money, so if I don't have to go, I don't go
Jamie Spencer explains why he isn't fond of riding at the start of the week

I’ve missed going racing a lot so it’s great to be back. I love racing – absolutely millions – and have always followed it. We could just do with the weather getting better!
Fergal O'Brien's honorary assistant Kian Burley samples the delights of the great British weather on his return to the racecourse

I looked up and they were showing a replay of the finish. Might Bite was in it and I thought 'what the hell happened to him? Why is he there?
Part-owner Simon Philip recalls Might Bite's remarkable 2017 RSA Chase win

Tonight I was meant to be @WorcesterRaces instead this afternoon I pulled a girl down from the rails of a motorway bridge. There are many messages about mental health, I urge those in crisis to call the Samaritans 116123. Thank you to those who stopped to help. #YouAreNotAlone

When Frankie is having a big day I would rather be in Alcatraz. He was horrific after he won the 1,000 Guineas. He started telling us he would ride until he's 65. I didn't even stop to have a shower. I just got into my clothes and left
Jamie Spencer also jokingly speaks about the antics of Frankie Dettori in the weighing room

She's got a huge future. It's early days in this filly's career, she's still only a frame. To go from a maiden to doing that is pretty something, isn't it?
David O'Meara waxes lyrical about Twilight Spinner following her easy victory in the Cecil Frail on Friday