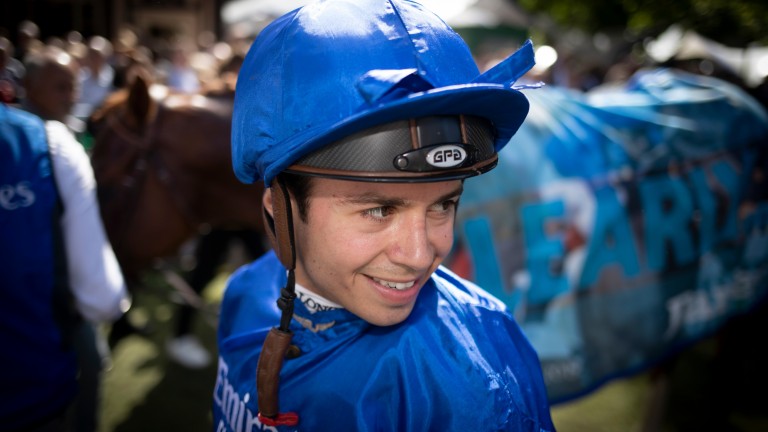 Who needs enemies when you've got friends like this? Mickael Barzalona will have been thinking just that after receiving a nasty surprise during Earthlight's pre-racing workout at Saint-Cloud on Sunday.

The Derby-winning jockey was aboard Earthlight when the dual Group 1 winner's work companion took a bite out of his left leg, forcing him out of the saddle in excruciating pain.

In an incident picked up by French racing channel Equidia, Barzalona can be seen hobbling away in distress, yet he still had the wherewithal to keep a tight hold of Earthlight's reins.

The French jockey suffered bruising and although he managed to get through the Pattern races on the card, he was forced to give up his last five rides.

Horses biting out has happened in the heat of battle on a few occasions, but Barzalona would have been forgiven for thinking he was safe in a leisurely gallop with a work companion. 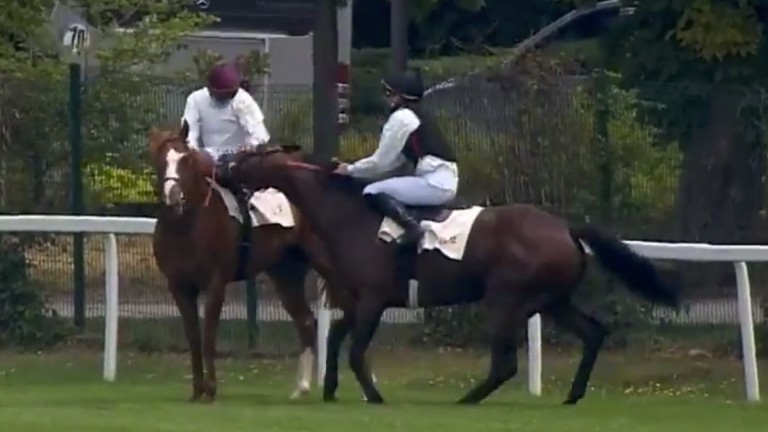 Feeling the pinch: Mickael Barzalona succumbs to a bite aboard Earthlight on Sunday

The Andre Fabre-trained Earthlight, who won last year's Middle Park at the expense of subsequent Commonwealth Cup hero Golden Horde, managed to complete a six-furlong spin as he builds up to his comeback following a fetlock sprain that forced him out of the mile Classics.

Connections have earmarked the Prix Jean Prat over seven furlongs in a fortnight's time as his comeback target, although he retains the option of the Group 3 Prix Ris-Orangis on the same card.

FIRST PUBLISHED 7:30PM, JUN 28 2020
Barzalona would have been forgiven for thinking he was safe in a leisurely gallop with a work companion