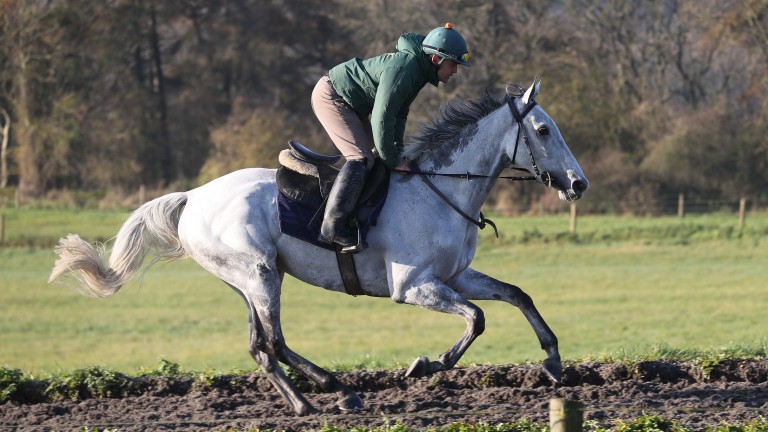 Bristol De Mai: in fine form ahead of his bid for a third Betfair Chase
GROSSICK RACING
1 of 1
By Andrew King UPDATED 7:37PM, NOV 18 2019

Nigel Twiston-Davies on Monday said "talk is cheap" when arguing that Lostintranslation has it all to prove against his hat-trick-seeking Bristol De Mai in the Betfair Chase on Saturday.

The trainer was in fighting form as he finessed his stable star's preparations for Haydock's Grade 1, laying down the gauntlet to Colin Tizzard's rising star and chief market rival.

Bookmakers make Bristol De Mai a narrow favourite to become the third horse after chasing heavyweights Kauto Star and Cue Card to win the race on three or more occasions, with Coral offering a best price 11-8, and Twiston-Davies believes his horse has the stronger credentials of the two market leaders, despite Lostintranslation's sparkling return to action at Carlisle at the start of the month.

"Talk is cheap and horses like Lostintranslation have to prove it," he said. "We trained the runner-up at Carlisle [Count Meribel] and I would like to think that Bristol De Mai is entitled to be a good bit better horse than him as far as ratings and everything else goes."

After last year's Betfair Chase some riders and trainers felt the fences at Haydock were too stiff and too testing, but Twiston-Davies believes jumping is one of Bristol De Mai's strong points.

"There was a lot of talk about Might Bite last year and in the end he did not jump the fences because they were reckoned to be too big but Bristol didn't seem to have that problem," he said.

"His jumping has always been very good except at Kempton in the King George last December, where he was bumped about and buffeted around before coming down."

A Grade 1-winning novice chaser last year, Lostintranslation is breathing down Bristol De Mai's neck at the head of the market, with the race sponsors among those offering a top-price 15-8 about Colin Tizzard's exciting second-season chaser, after six remained in contention for the £200,000 contest on Monday.

Partnered as always in his home workouts by Richard Bevis, Bristol De Mai was put through his paces with a couple of canters on the uphill gallop at Twiston-Davies' Cotswold stables on Monday morning, with the trainer more than pleased with how his preparation had gone.

He said: "Everything has gone spot on with his build-up as he is as forward as he always is for his seasonal debut. He has been to Haydock four times and gone home a winner four times. Let’s hope he makes it five on Saturday.

“Unexpected things can happen, but he was the third-best horse in England and Ireland in the Cheltenham Gold Cup last March and the two Irish horses who beat him are not coming over so everything hopefully points to him winning the Haydock race again.”

Asked why the eight-year-old is so masterful at Haydock, the trainer responded: "I don’t think it's anything to do with Haydock or the time of year that the race falls. He's a good horse in a very good race, and he seems to handle any type of ground as it was good last year but heavy when he won it in 2017. He's only eight and should not be going downhill yet."

Twiston-Davies also confirmed that stablemate Ballyoptic, recent winner of the Grade 2 Charlie Hall Chase at Wetherby and unbeaten in two outings this term, could join Bristol De Mai at Haydock.

He added: "He's done nothing wrong this autumn and if there aren't many runners he could run for a bit of place money, so why not?"

Lostintranslation, Frodon, Elegant Escape and Altior, who is likely to instead run at Ascot on the same day, also remained in the race on Monday. 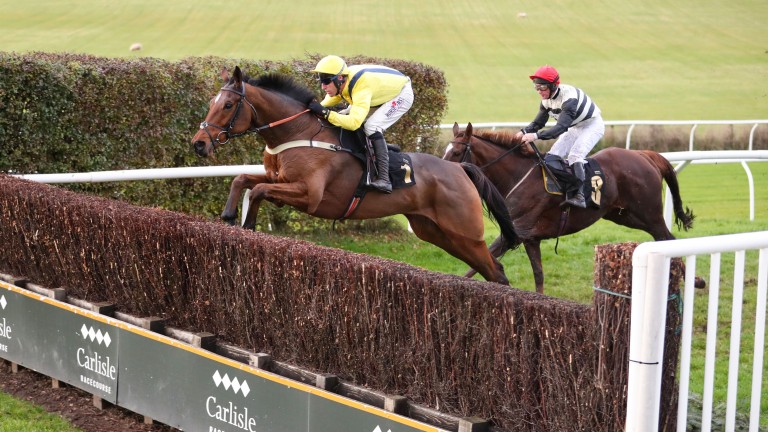 Lostintranslation: put in a fine round of jumping on his return at Carlisle
John Grossick (racingpost.com/photos)

Clerk of the course Kirkland Tellwright is not expecting any repeat of last year's controversy, having changed the composition of the fences.

He said: "Last year the fences were made of black birch which tends to swell slightly if it gets wet, so for this season we have switched back to leaf birch which does not pack quite as tight and the leaves tend to shake out so we hope that creates less controversy.

"There should be a premium to jumping well in the top-class chases and the problem we have is that if we make the fences too small or too soft we get known as a gaff track.

“We are slightly dismayed with only half a dozen horses being declared as there is a substantial prize-money pot on offer, and we had hoped that one of the big Irish trainers may have considered having a runner or two.”

Tellwright predicts the going at Haydock on Saturday should be perfect jumping ground for a meeting which boasts £500,000 in prize-money. He added: "We have not raced on the jumping track since last May, so we'll be on what you could call virgin ground.

“We are forecast a few showers on Wednesday, Thursday and Friday so I foresee that the ground on the chase course will be no worse than soft while on the hurdle track it looks like being good to soft and soft in places as long as the predictions we are getting are correct.”

FIRST PUBLISHED 11:22AM, NOV 18 2019
He has been to Haydock four times and gone home a winner four times. Let’s hope he makes it five on Saturday

Haydock braced for rain and frost ahead of bumper Saturday card Recent history looks good for Ballyoptic to carry a big weight in Classic Chase Four horses who will appreciate the soft ground at Warwick on Saturday Spot the silks! Success for Sea Pigeon colours and Jonjo O'Neill's racing club 'Aintree will suit a lot better' - Paul Nicholls talks McFabulous and much more 'It's been a great day' - Daryl Jacob on fire with incredible 3,275-1 five-timer