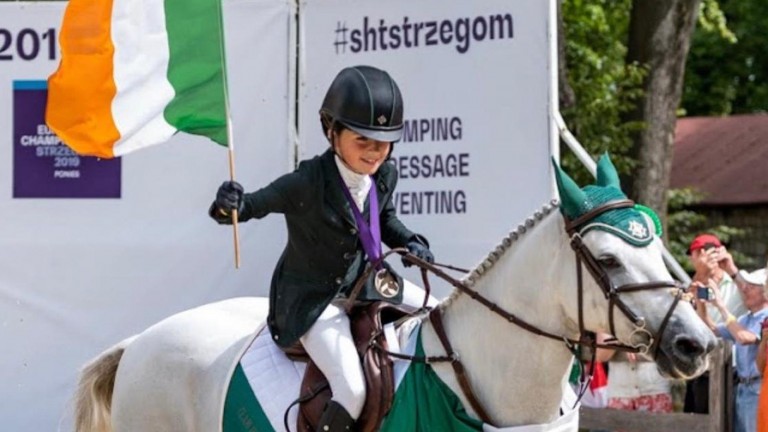 The Tiggy's Trust online auction will take place on December 2, with a morning on the gallops with Willie Mullins one of more than 40 lots up for grabs.

Tiggy’s Trust is a charitable foundation set up in memory of talented event rider Tiggy Hancock, who died in June at the age of 15, and Cheltenham racecourse will be turning yellow on December 10 for the launch of the charity at the International meeting.

The charity will use all funds raised to assist young people both by offering mental health support, through recognised organisations, to those who need it, and also providing training and education to help young aspiring equestrians achieve their goals.

A proportion of the funds raised on the day at Cheltenham will also go to the Injured Jockeys Fund and the Pony Racing Authority.

Hancock's family commented: “We are delighted to be welcomed to Cheltenham Racecourse to launch Tiggy’s Trust in memory of our beloved daughter and sister. Tiggy touched the lives of so many in her short life – her golden heart, infectious fun personality and cheeky smile was extended to all who knew her.

"Despite her young age she had the capacity to reach out and offer positivity to those around her, both young and old, and through the trust we hope to continue that legacy.”

More information on what lots are on offer at the auction can be found here.

Tributes have been paid to John Wills, breeder of 2006 Oaks runner-up and Group 2 winner Rising Cross, after his death on Friday at the age of 85.

Wills also owned horses on the Flat and over jumps with the likes of Alan Swinbank, Nicky Richards and Maurice Barnes and bred Himalayan Trail, who won the Midlands Grand National in 2008 for trainer Sue Smith.

Wills's biggest success as a breeder came with the John Best-trained Rising Cross, who as well as finishing second to Alexandrova at Epsom won the Park Hill Stakes at York and the Listed Lupe Stakes at Goodwood.

“He was an absolute gentleman who just loved his horses,” said Anne Barnes, wife of Maurice, with whom Wills had horses in training for 30 years, recording 11 winners from 229 runners.

“John and Maurice had a great rapport, which speaks for itself given he was with us for 30 years, which is quite nice really. He was more interested in the breeding, so he'd always be on the phone with Maurice to ask about the other side of the business.

"He had his most runners and winners with us, not as many as we’d have liked but John would be quite happy for us to continue getting seconds and thirds and having good days out.

"We were in contact weekly and it’s sad to think we won’t get his messages anymore. He was an old-fashioned type with good manners and was a real gentleman."

Wills was also part of the Thornton Stud Partnership which in 2001 helped re-establish the north Yorkshire nursery as a breeding base.

Owner and football manager John Sillett dies at age of 85

John Sillett, an owner and breeder of winners on the Flat and over jumps but better known to sports fans as a football manager who guided Coventry City to FA Cup glory in 1987, has died at the age of 85.

Sillett, who played for Chelsea, Coventry and Hereford United before moving into management, had a huge passion for racing and was co-owner of Major Laugh when he won a valuable sales race for trainer Barry Hills at Newmarket in 2001.

Kamanda Laugh, also trained by Hills, won six times on the Flat in Sillett’s distinctive black and yellow diamond colours between 2004 and 2005.

In recent years, Sillett bred and owned Laughing Luis, who won twice in bumpers and twice over hurdles in the 2018-19 season when trained by Nicky Henderson.

Trainer Mark Fahey has been hit with a €6,000 fine under the non-triers rule after his horse Strong Roots could finish only ninth after being backed into favouritism at Limerick on November 16.

Strong Roots has been banned from racing for 90 days while her jockey Gavin Brouder was also handed a suspension of 21 days and ordered to forfeit his riding fee.

No punishments were handed out at Limerick as Brouder was unable to attend the stewards' inquiry after suffering a fall in the following race.

The referral took place at Fairyhouse on Sunday where Fahey, Brouder and Strong Roots were penalised under rule 212. Fahey declined to comment on whether he would appeal against the penalty.

The Listed Houghton Mares' Chase, traditionally run at Carlisle at the end of November, will be moved to Aintree as part of an eight-race card on Saturday December 4. The 2m4f race is set to be the third race on the card (12.20) before the feature Grade 2 Many Clouds Chase and the Grade 3 Becher Chase, after the Carlisle meeting was abandoned on Sunday due to frost.

Raj Parker appointed to BHA board

The BHA has announced regulatory and sports law specialist Raj Parker has been appointed to its board, taking up the role of independent non-executive regulator director from January 1 to replace the outgoing Sir Paul Stephenson.

Parker said: “I’m extremely excited to be joining the board of the BHA at this particular time, and becoming involved in the horseracing industry. I very much look forward to helping the board with its commitment to effective regulation and integrity and to ensure that the sport continues to be clean, fair, and well governed.”

BHA chair Annamarie Phelps said: “We are delighted to welcome Raj to the board. His prodigious experience in regulatory matters and sports law will be a valuable asset to the board and to the sport.

"We are also extremely grateful for the contribution made by Sir Paul Stephenson to the sport over his six years at the BHA.”

FIRST PUBLISHED 3:18PM, NOV 29 2021
We are delighted to be welcomed to Cheltenham Racecourse to launch Tiggy’s Trust in memory of our beloved daughter and sister