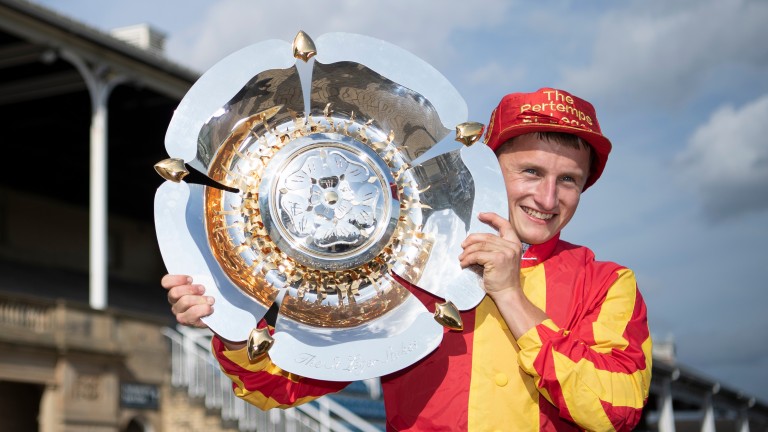 Tom Marquand passed another milestone in his blossoming career when he topped his best annual tally of winners in Britain at Chelmsford on Friday night.

The former champion apprentice has steadily increased his number of winners in Britain every year since 2016, reaching a century for the first time in 2018 and 136 last year.

He edged past year's last haul and on to 137 winners when steering the Queen's filly Companionship, fittingly trained by his main backer William Haggas, to victory in a mile fillies' novice.

Marquand said: "Every year beating my previous year's tally is my biggest goal and to do it in the Queen's colours was a bonus. Thanks to everyone who has supported me in what has been an incredible year."

The achievement came in a year when racing was halted in Britain for more than two months due to the first Covid-19 lockdown, and Marquand added: "I didn't think I had any chance of topping 136 this year as I only had 12 to my name after lockdown ended on June 1."

Marquand enjoyed a breakthrough Classic victory when partnering Galileo Chrome, a ride he picked up only 24 hours earlier, to St Leger success at Doncaster in September, while he has enjoyed Group 1 wins across the globe with the Haggas-trained Addeybb, including in last month's Champion Stakes.

He is to join his partner Hollie Doyle in Hong Kong next month, when the pair have been invited to take part in the International Jockeys' Championship at Happy Valley.

He said: "I think they've only invited six overseas jockeys this year and it's remarkable Hollie and I are among them. It will be a first for both of us riding there and we're both very much looking forward to it."

Marquand is also expected to return to Australia to be reunited with Addeybb in a bid to repeat their two Group 1 wins in Sydney this year.

He said: "I don't know exactly when I'm going back but hopefully it will be another good trip. The only downside is that you have to be quarantined in a hotel room for a fortnight before you can do anything."

Stud groom Karl Kingscote suffers spinal injuries in mountain bike accident 'Good ground isn't a problem, he'll run on good' | Alan King | What A Shout Glass Slippers joined by Emaraaty Ana in Breeders' Cup defence for Kevin Ryan Vertem Futurity and Cheltenham | ITV Racing Tips | Racing Postcast Can yards work with a conventional staff rota? Nick Alexander shows they can... If you think a jockey should be a role model for your kids, you've got a problem