'Another win looks imminent' - our experts nominate their horses to follow 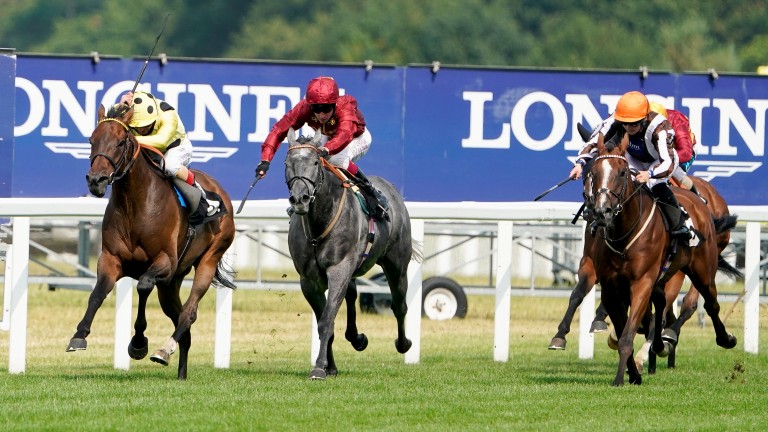 Maddy Playle thinks she saw a future winner at Ascot on Saturday
Alan Crowhurst
1 of 1
UPDATED 9:39AM, AUG 11 2020

Progressive on the all-weather this year, including when beating subsequent Glorious Goodwood scorer Cepheus at Kempton last month, the son of Siyouni was an interesting prospect back on turf and upped in class.

Keen in the early stages and restrained by Hayley Turner, there was little pace – the following handicap over the same course and distance was run over two seconds quicker – which did not suit this exuberant four-year-old.

Turner opted for a daring run up the inside and the gelding responded handsomely under tender handling, his rider sensing the front three had already got away.

On this basis there is no reason to suggest he is not just as good on turf and there looks to be ample room in his handicap mark.
Maddy Playle

I can't imagine most people would consider a nine-year-old with 65 races under his belt worthy of a tracker entry, but the case for Club Wexford is an obvious one.

The son of Lawman has been busy since the resumption of racing and had recorded two smart performances when second at Ayr in June and fifth at Haydock in July.

This was another promising effort as he was held up in last and left with nowhere to go when Paula Muir asked him to close on the leaders. Switched out, he stormed home in the final furlong to finish third to two unexposed horses.

This effort came off a mark of 86, plus his rider's 3lb claim, with his last winning effort off 88. Another win should be imminent if Roger Fell can find a suitable race.
Maddy Playle

A 70,000gns yearling purchase, Escobedo boasts a stamina-laden pedigree being by Nathaniel out of a Lawman filly and he made an eyecatching debut over what looked an inadequate trip at Ascot on Saturday.

Richard Hannon rarely has his unraced two-year-olds ready to go first time up, and although Escobedo looked extremely professional – quickly away from the stalls and made the running – I expect him to take a big step forward.

He was the last off the bridle, and despite the fact the eventual winner Laneqash cleared away in the final furlong, the fact the race turned into a sprint probably did not suit Hannon's runner. A step up to a mile will help, as will a turning track.
Tom Collins

A daughter of Frankel who is related to winners over trips between a mile and two miles, Babindi was never expected to produce her best effort over 7f on debut at Newmarket.

Trained by William Haggas, she was a notable drifter in the pre-race market and took a bump at the start which forced her right to the back of the pack.

She made eyecatching headway when the race started to heat up and finished a clearcut third behind two smart rivals. Wakening, who won the race, got the dream trip in the lead, while runner-up Statement looked pretty fit on debut.

Much like Escobedo, Babindi will relish a longer trip on her next outing.
Tom Collins

FIRST PUBLISHED 7:00AM, AUG 11 2020
There is no reason to suggest he isn't just as good on turf and there looks to be ample room in his handicap mark