Royal Ascot 2021: ten races could be run on Saturday if day four is called off 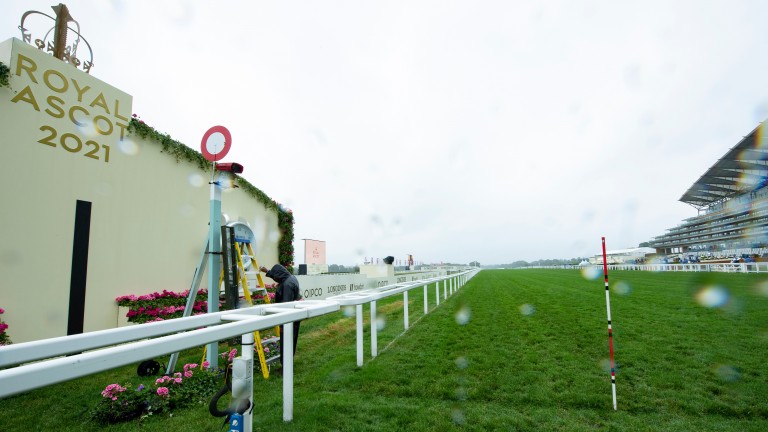 Heavy rain has been falling persistently at Ascot, with Friday's card due to start at 2.30pm
Edward Whitaker (racingpost.com/photos)
1 of 1
By Lee Mottershead UPDATED 1:26PM, JUN 18 2021

Royal Ascot's fourth day is now dependent on the track passing a 12.45pm inspection after parts of the track were left unraceable following persistent heavy rain.

After 26mm of rain since the end of racing on Thursday the ground is now officially soft, heavy in places.

One contingency plan should Friday's Royal Ascot card be abandoned, the Racing Post understands, is to stage a ten-race card on Saturday – all live on ITV – with the Coronation Stakes, Commonwealth Cup and King Edward VII Stakes transferred from Friday.

Ascot have also stated that in the event of an abandonment there is no possibility of Friday's card being moved to Sunday due to this year's royal meeting being an official government test event.

Stickels said: "We are going to have an inspection with stewards, jockeys and trainers at 12.30pm. We have found areas of the track I'm not comfortable with, one bit being down the hill and another turning into the straight.

"We are going to realign those areas and by moving the rail I would be pretty hopeful, assuming we don't get much rain.

"However, we are forecast further showers, some heavy and thundery, which doesn't help us."

'Racing on Sunday is not an option'

Outlining what he stressed are only potential contingency options, Nick Smith, Ascot's director of racing and public affairs, said: "In the event of an abandonment we are working on a ten-race card, with all the races shown by ITV Racing.

"We would move the Coronation Stakes, Commonwealth Cup and King Edward VII Stakes. What happens to the other races on today's card – and whether they are rescheduled somewhere else next week – would be a decision for the BHA.

"Another possibility being considered is to race only on the straight course today. However, a problem with that is the issues threatening racing today are not solely on the round course."

Smith added: "Racing on Sunday is not an option for a number of reasons, principally because we would be outside the government pilot test event timeline under which this meeting is being conducted. The dynamic of the day would change and bring with it significant complexities."

The last time racing at Royal Ascot had to be abandoned was in 1964, when a waterlogged course after torrential rain meant the last two days of the meeting were washed out.

The Gold Cup and a scheduled walk-over for Trelawny in the Queen Alexandra Stakes never took place because the inflexible nature of racing administration at the time did not allow for the 12 abandoned races to be rescheduled.

Friday's card has already been hit by a large number of non-runners, with five horses taken out of the Commonwealth Cup, including leading fancy Supremacy, and Primo Bacio ruled out of the Coronation Stakes.

FIRST PUBLISHED 10:35AM, JUN 18 2021
In the event of an abandonment we are working on a ten-race card, with all the races shown by ITV Racing

Charlie Appleby outlines plans for top three-year-olds Adayar and Hurricane Lane The King George was great but this Saturday at Ascot is far more important King George analysis: 'Adayar might not be the best colt in his stable' Forgive the gushing enthusiasm but I feel like I have seen something special Who is better - Hurricane Lane or Adayar? Our experts have their say Zain Claudette holds on to provide Ray Dawson with emotional first Group win