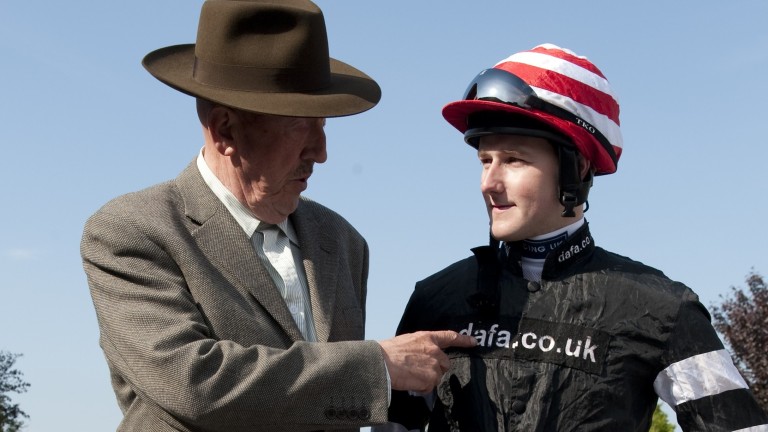 Barney Curley and Tom Queally: the legendary figure had a massive influence on the jockey's career
Edward Whitaker
1 of 1
UPDATED 9:52PM, MAY 30 2021

It has hit me hard, it's like losing a best friend. He was due to come back to me for his retirement – and I didn't want it to end this way
Daryl Jacob speaks of his deep sadness at the death of the much-loved Top Notch

Would I change what I went through? Absolutely not. It's made me who I am today and taught me success is not a number of achievements, it's to be content with life
Conditional jockey Lucy Barry opens up about her mental and physical struggles as a jockey following her retirement from the saddle

The excavation team are building a new moat for Middleham Castle pic.twitter.com/PqhY5ASimC

Shaamit won the first Saturday Derby and they pulled it back to 2.25 because the first game of the European Football Championship started at three o'clock [England 1 – 1 Switzerland]. I thought then, f**k me, is that where we're heading?
William Haggas recalls his memories with his Derby hero as he suggests the great race should revert to a midweek slot

They used to think I was mad for letting a racehorse loose in the yard. He was very honest, though. There was an enormous understanding and trust between us. I knew he wouldn't let me down. He was a good old boy
David Elsworth fondly remembers his people's champion Persian Punch as part of the Racing Post's Great Stayers series

I remember watching the Flying Childers from the paddock at Doncaster and as he went past in front of me, I turned away thinking he'd won, which I'll never do again
Charlie Hills speaks about Cotai Glory's bizarre defeat at Doncaster as part of the Racing Post's Wacky Races series

Apart from my family and my parents there has been no greater influence on my life or my career than Barney Curley and there are no ifs, buts or maybes about that
Tom Queally pays tribute to the great Barney Curley, who died earlier this week at the age of 81

All of us on the hill are saddened to hear of the passing of racing legend Barney Curley. His name along with this phone box are an integral part of our history on the hill. Condolences to his family and friends. #barneycurley #Bellewstown #irishracing pic.twitter.com/InMx7OAqXn

I could talk for a week about all the things we did and all the things he taught me – he was everything to me. I left Italy on my own and he was responsible for getting me the job with John Gosden in my early 20s. He guided me right through to the end
Frankie Dettori also remembers the importance that Curley had on his illustrious career

Maybe he’s being trained better. Maybe. Australian trainers, I believe, are the best in the world and they significantly improve these European horses
Peter Moody makes a bold call that Anabel Neasham is a better trainer than Sir Michael Stoute after Zaaki's Doomben Cup victory

Everyone who has been involved in keeping the show on the road behind closed doors – they have all paid attention to every single detail. That’s why racing has come through this in good shape. A huge thank you is deserved to everyone who made this happen
Curragh boss Pat Keogh thanks all involved in Irish racing as it was announced the Curragh was selected for a pilot initiative

FIRST PUBLISHED 6:00PM, MAY 29 2021
They used to think I was mad for letting a racehorse loose in the yard. He was very honest, though