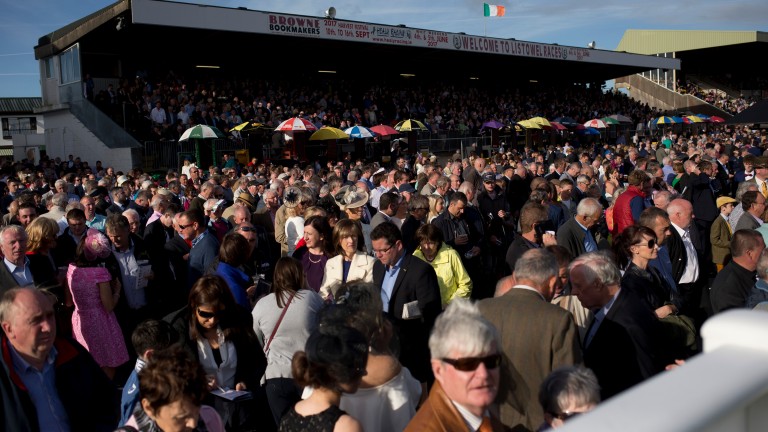 Listowel: Harvest festival will be later in September in 2020 due to a clash with the National Ploughing Championships
Patrick McCann
1 of 1
By David Jennings UPDATED 7:42PM, SEP 4 2019

Brian Kavanagh has defended the decision to have six blank Sundays without any racing in Ireland next year, with the Horse Racing Ireland chief executive keen to stress the importance of striking a balance with the needs of stable staff.

The 2020 Irish fixture list was revealed on Wednesday afternoon with seven more meetings than 2019, but there will be no Sunday servings in Ireland on April 26, June 21, July 26, August 30, September 6 and December 13. There were five blank Sundays in 2019 and only three in 2018.

Kavanagh said: "We feel it is only fair to strike a balance for stable staff. We increased the number of blank Sundays this year and we have received very positive feedback from stables for doing so. We need to be fair to everyone."

The Irish Derby festival at the Curragh reverts back to Friday, Saturday and Sunday – it was run on Thursday, Friday and Saturday this year – with the Classic continuing to be staged on a Saturday evening.

As expected, the number of Friday fixtures at the Curragh has been reduced to three from seven following poor attendances this summer.

The Listowel harvest festival moves to later in September in 2020 to avoid a clash with the National Ploughing Championships, while there will be a weekend offering over jumps at Punchestown in early June for the first time.

Kavanagh said: "It was at Listowel's request that we moved to later in September next year as they felt the Ploughing Championships had a very similar target market to them. We were guided by the team there and they were very keen for it not to clash."

He added: "The two-day weekend fixture at Punchestown in June is a new initiative and something we wanted to try. They are moving their two midweek fixtures after their spring festival to the one weekend in June.

Dundalk's early-season schedule will cease on April 22 to facilitate the timetable for the replacement of the current surface. The work is due to be completed in early June, a month ahead of the track's first summer fixture on Sunday, July 12, with its traditional August 15 date also reinstated next year.

"The HRI Board has agreed that there should be at least a month between the completion of the track replacement works and the first summer fixture in Dundalk, ensuring that the surface is properly bedded down with appropriate trials taking place prior to racing recommencing on the new polytrack surface," said Kavanagh.

On a different note, Kavanagh said the clash between the opening day of Irish Champions Weekend and the All-Ireland final replay between Dublin and Kerry is not the disaster many are suggesting.

"We have altered the timings of the races for Saturday and that is something Pat [Keogh, Leopardstown CEO] was already planning because the race is going to be shown on Japanese TV and the replay crystallised that.

"I obviously wish Dean Rock had scored that late free for Dublin and we had no replay, but there is now a very attractive offering at Leopardstown, and we saw during the Dublin Racing Festival how well the rugby matches after racing worked. I'm sure there will be a terrific atmosphere at Leopardstown with the match on all the big screens," Kavanagh added.

FIRST PUBLISHED 6:45PM, SEP 4 2019
We feel it is only fair to strike a balance for stable staff