Record-breaking £640,000 raised for Macmillan as Atkinson wins at York 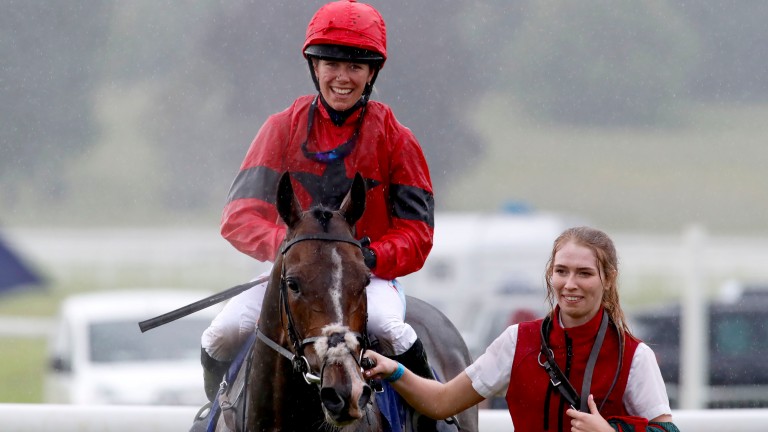 The 11 riders who braved torrential rain for the Ernest Cooper Macmillan Ride of their Lives at York on Saturday contributed to a record sum of £640,000 raised for Macmillan Cancer Support.

The supporters of the riders, who had to cope with the unseasonable weather alongside the challenges of the race, contributed more than £300,000, bringing the total amount raised on York's charity raceday to nearly £9 million since its inception in 1971.

Among those on hand to watch the action at York was BAFTA-winning actor Benedict Cumberbatch and William Derby, York’s chief executive and clerk of the course, said: "To have raised a record amount at the 49th time of asking is an amazing achievement and a tribute to everyone who has contributed to make this raceday such a wonderful event.

"Countless individuals and organisations have been so generous with their time, involvement and support of the day from throughout the racing and Yorkshire community – it's a special day everyone associated with it can be very proud of."

It was perhaps fitting  that the Jedd O'Keeffe-trained Instant Attraction stormed to victory under Charlotte Atkinson as the trainer underwent treatment for throat cancer back in 2010.

Reflecting on her win, Atkinson, 25, said: "He's an absolute legend – he gave me a great ride for my first time. The last six months have been really hard with all the training but it's all worth it. It's an amazing charity to raise money for and I competed in memory of my grandfather who we lost to prostate cancer six years ago.

"I've done a bit of showjumping and have a livery yard at home but never sat on a racehorse before January."

Funds raised at York are split between a number of charities, with 90 per cent going to Macmillan and the remainder going to York Against Cancer, St Leonard’s Hospice, Eye Cancer Moghissi Trust, Racing Welfare and the Injured Jockeys Fund.

Lynda Thomas, Chief Executive of Macmillan Cancer Support, said: "On behalf of all our Macmillan nurses, doctors, support workers and cancer experts, I wanted to say a massive thank you to everyone who made this year’s Macmillan Charity Raceday such a success."

Macmillan Charity Raceday will celebrate its 50th anniversary next year on Saturday June 13, and donations to the riders' fundraising pages can be found at www.macmillan.org.uk/charityraceday

FIRST PUBLISHED 1:53PM, JUN 16 2019
It's an amazing charity to raise money for and I competed in memory of my grandfather who we lost to prostate cancer six years ago