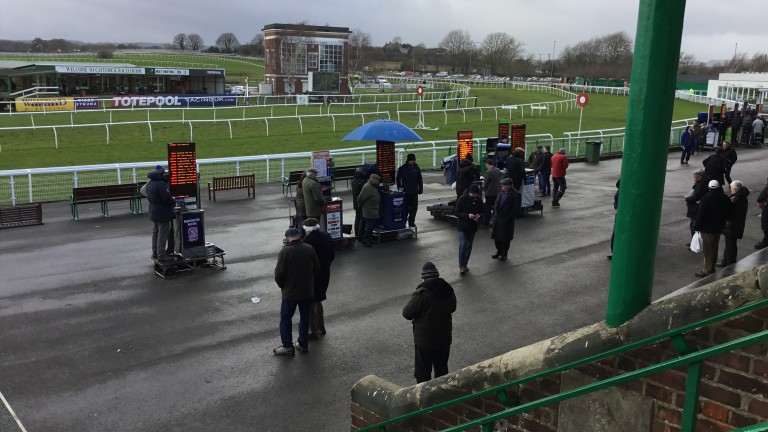 Jump racing in Britain will be absent until Wednesday unless conditions improve at snow-covered Catterick, where an 8am inspection will determine if racing goes ahead on Tuesday.

Clerk of the course Fiona Needham said on Monday: "We have around an inch of snow covering the course and the forecast rain we needed to disperse it has not yet arrived.

"If the snow is gone by Tuesday morning and knowing how well the course can drain, I would say it's around 70-30 in favour of racing going ahead."

Fontwell managed to stage its popular National Spirit day on Sunday, but Monday's cards at Plumpton and Carlisle have been lost to waterlogging, along with Tuesday's fixture at beleaguered Leicester.

Fairyhouse's meeting on Monday also fell foul of the weather, leaving Southwell and Wolverhampton to host all-weather Flat cards, one of which will also take place at Lingfield on Tuesday.

Jumping is scheduled for Wednesday with Market Rasen, Musselburgh and Wincanton on duty.

Wincanton's clerk of the course, Dan Cooper, said: "We only have showers forecast in the 24 hours leading up to Wednesday's meeting so, hopefully, we should be okay."

While Jack Pryor and Harriet Graham, who oversee Market Rasen and Musselburgh, expressed no real concerns on Monday afternoon about racing.

Taunton was forced to abandon its previous meeting this month but is due to race again on Thursday, with ground conditions officially described as heavy, soft in places.

Clerk of the course Jason Loosemore said: "We have a forecast of anything between 15mm and 35mm of rain before Thursday and I certainly do not want to see the latter figure. We will have to wait and see how it pans out."

Ludlow beat the weather last week and is due to race again on Thursday. The ground is described as soft, heavy in places with a forecast of snow and showers leading up to the meeting.

FIRST PUBLISHED 10:59AM, FEB 24 2020
Unless things improve through the day I will be calling an 8am inspection on Tuesday morning