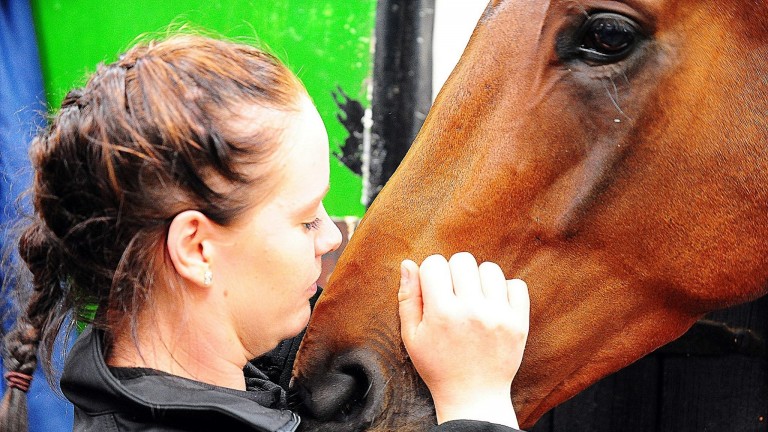 How did you first get involved with racing?
I've always been interested in horses and had my own when I was younger. I was watching something on TV that had racehorses in it and thought I'd be quite interested in that. So, I looked up racing online and the British Racing School came up so I looked into that and applied. I didn't tell my mum as I was 16 but then got an interview, therefore I had to tell her so she could drive me up there!

You've just been promoted to head girl – what are you looking forward to about your new role and what does it entail?
I've just been on a five-day course at the Racing School for the Level 3 Diploma which will help with being head girl as you're learning more while you work. It's a case of making sure everything is done on the yard, like checking legs and bandages and feeding the horses. I'm really happy with the opportunity as I've only been with Martin for a year and he's really supported me. I've been in racing for about eight years so to progress is really nice.

What do you enjoy most about your job?
The horses and people I work with. Martin and Belinda [Keighley] are really encouraging and have got me into this charity race which I've wanted to do for years. They're a lovely team to work for.

And what is the most challenging aspect?
I miss home a bit sometimes as my family are in Cornwall.

You are taking part in the Racing Staff Week Cup at Newton Abbot on Friday. Are you nervous?
I'm excited and nervous. I've always wanted to have a ride in a charity race and as soon as I went to Martin's they said it was something they do. I'm riding Primogeniture, who I know inside-out as I ride him every day at home and I've got family and friends coming so that will be nice.

Would you consider taking out a riding licence?
I've never wanted to be a jockey. I like being on the yard and getting the horses ready. Training for this race you realise how fit jockeys have to be on a daily basis.