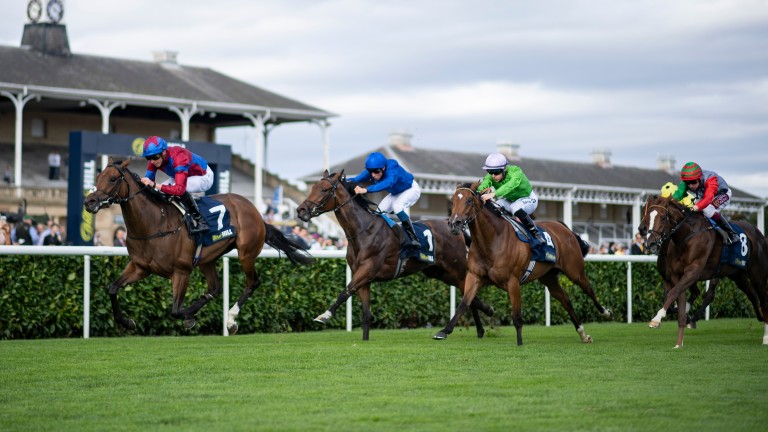 Powerful Breeze and James Doyle have the May Hill Stakes in safe keeping
Edward Whitaker
1 of 1
By Andrew Dietz UPDATED 6:56PM, SEP 12 2019

Hugo Palmer received a welcome boost after a turbulent campaign when Powerful Breeze put the trainer back on the Classic trail with victory in the May Hill.

Palmer, who won the 2,000 Guineas with Galileo Gold in 2016, has seen his number of winners drop markedly on previous years, in part as a consequence of the reduction of his string.

The quality has been affected too, but Palmer took a big step back in the right direction with Powerful Breeze earning quotes between 16-1 and 25-1 for next year's Qipco 1,000 Guineas after extending her unbeaten record to two under James Doyle.

"Horses surprise you the whole time and often it's the wrong way, but it's the right way today," said Palmer.

"She doesn't have another entry but we could supplement her for the Fillies' Mile, which is the obvious race. The dream is for her next race to be over a mile at Newmarket, either in the Fillies' Mile or the Guineas."

Palmer, recording his 40th success of the year after a high of 87 in 2018, struck at this level for the first time since Unforgetable Filly, also owned by Dr Ali Ridha, won the German 1,000 Guineas in 2017.

"I'm delighted for Dr Ali, who bred this filly and is always patient with these horses," Palmer said. "She's immature, we haven't put a lot of pressure on her and I'm sure she'll be a better three-year-old."

Palmer was hot property as Galileo Gold and Irish Oaks heroine Covert Love racked up two Group 1s each between July 2015 and June 2016, but his Kremlin Cottage team is now down to below 100 from 150.

"When we won the Irish Oaks everyone got very excited and sent us loads of horses," he said. "We don't have the numbers we had in the past and when you've got fewer horses, you've got fewer good ones.

"The horses were sick in the spring but since then we've got them right and, touch wood, they've stayed right. That's our 40th stakes race victory at the end of year nine and it's an important one for us. We've won a lot of good races and we've got to keep winning them to make people send us horses."

FIRST PUBLISHED 3:58PM, SEP 12 2019
All the signs are positive, she's doing what she's doing without knowing about it, and we'll have to live the dream