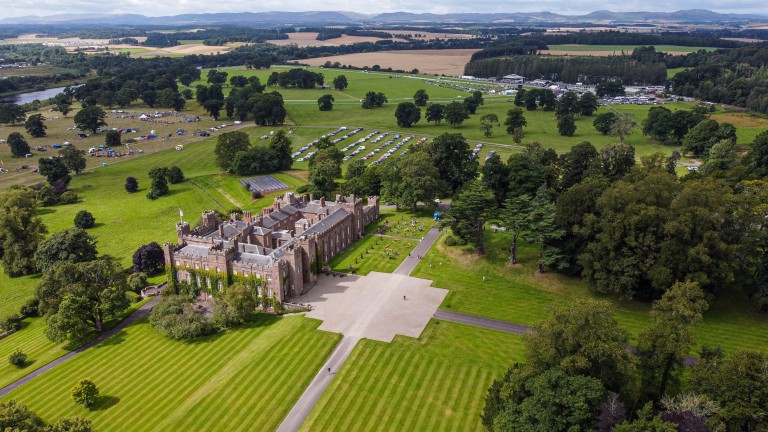 Perth racecourse and the Mansfield family, on whose Scone Estate the track is situated, have revealed they are in advanced stage of negotiations which could usher in a new era for the venue.

Run since 1908 by the Perth Hunt Club, the course is the only independent in Britain to be run as an association rather than a limited company.

Perth chief executive Hazel Peplinski, who will step down at the end of the year, said that the Hunt Club had gone to Scone Estate with an initial plan to transform itself into a limited company, but was now fully behind a proposal from the estate to found a new company to run the course under the wing of Scone.

Peplisnki said the proposals - which will be put to Hunt Club members at a July 18 annual general meeting and subject to a vote once due dilligence has been completed on the scheme - would would wipe out debt and ensure increased investment as well as safeguarding the futures of the track's employees.

"Scone Estates has committed to investing in the racecourse on a scale that is currently out of reach for The Perth Hunt Club – a truly transformational opportunity," said Peplinski.

The Earl of Mansfied added: "The racecourse moved to Scone Parklands in 1908 and is a sporting venue we are very proud to be associated with. Our proposal for the Perth Hunt is borne from a desire to invest and enhance racing in Perth.

"The independence of Perth racing is important to us, as is maintaining the current racing programme both in quality, and number of days. Working with the existing team we will grow and enhance racing in Perth and secure it for the next 100 years."

Ann Ferris, one of Irish racing's greatest trailblazers for female jockeys, has died at the age of 81.

A leading female rider of her generation alongside sister Rosemary, Ferris memorably became the first woman to win the Irish Grand National when partnering her father Willie Rooney's Bentom Boy to victory in 1984.

At the time, it was the biggest-priced winner in the race's history at odds of 33-1.

Ferris, who rode her first point-to-point winner at the age of 14, was also the first female jockey in Irish racing history to win a hurdles race against men in 1972.

Another landmark triumph came in the 1979 Irish Sweeps Hurdle aboard 25-1 shot Irian, trained by Arthur Moore, while she partnered her father Willie's Mourneview to success in the 1976 Ulster National.

Ferris, from Glengormley in County Antrim, was married to the late Harry Ferris and had two children, Gaye and Billy.

She died peacefully on Wednesday at Daisy Hill Hospital, and her funeral is a strictly private gathering with family flowers only.

According to a death notice: "Donations in lieu of flowers in memory of Ann can be made payable to Motor Neurone Disease, c/o John M Murdoch Funeral Director Brookside 125 Armagh Road, Newry, BT35 6PU."

Bob Baffert has been banned for a year from running horses at tracks in New York but will be able to participate in next season's Belmont Stakes.

His suspension, officially given out on Friday, finishes on January 26 and before the final leg of the US Triple Crown. Baffert will not be able to run horses in the Kentucky Derby, having been issued with a two-year ban from Churchill Downs.

A number of Baffert's horses have tested positive for banned raceday substances, most notably 2021 Kentucky Derby winner Medina Spirit, who was subsequently stripped of the race.

Barbury Castle has ceased to be a point-to-point venue with immediate effect owing to the "highly challenging economic environment".

A former racecourse, the Wiltshire venue staged the Vine and Craven and the Tedworth Hunt point-to-points, as well as the Barbury International meeting, the only British point-to-point fixture in the calendar to feature riders from Britain and Ireland.

The track has hosted racing and pointing for more than 100 years and was reopened in 1992 after a spell when it was used for agricultural production. A statement from Barbury Castle Estate said: “We are saddened to announce that a difficult decision has been taken to cease point-to-point racing at the estate this season and into the foreseeable future.

"This decision has been taken in conjunction with the organisers of three race meetings hosted at the estate – the Barbury International, the Vine and Craven and the Tedworth."

The statement continued: "The decision is a result of the current highly challenging economic environment. The course has been operating at a loss for a number of years, which has been compounded by the cancellation of meetings during the Covid pandemic and a significant reduction in sponsorship revenues.

"Against this backdrop, surging inflation has also substantially raised the costs of maintaining the course and the required multi-year capital investment programme. These factors have resulted in a continuation of point-to-point racing becoming no longer viable.

"No firm decision has been taken on the long-term future of the point-to-point course."

Barbary Castle International Horse Trials, which runs from July 7-10 this year, is unaffected but the hunts connected with the point-to-points must now look for alternative venues.

Previously known as the Irish Godolphin Stud and Stable Staff Awards, the initiative, which celebrates the unsung contributions made by people in the industry, has been reshaped and rebranded to leave eight Irish Thoroughbred Industry Employee Awards that all nominees are eligible for.

The Irish Racing Excellence Award winner will be selected from the eight successful candidates at the ceremony, while the Racecourse Award is to be retained.

Godolphin are the principal sponsors of the awards, which will be presented on October 25, in association with the Racing Post, Irish Stable Staff Association, the Irish Thoroughbred Breeders' Association and Horse Racing Ireland.

Godolphin Ireland managing director Joe Osborne said: "We hope the awards restructure will ensure an even more rewarding experience for our industry's employees and showcase the skills, experience and dedication of the hardworking men and women in our industry. 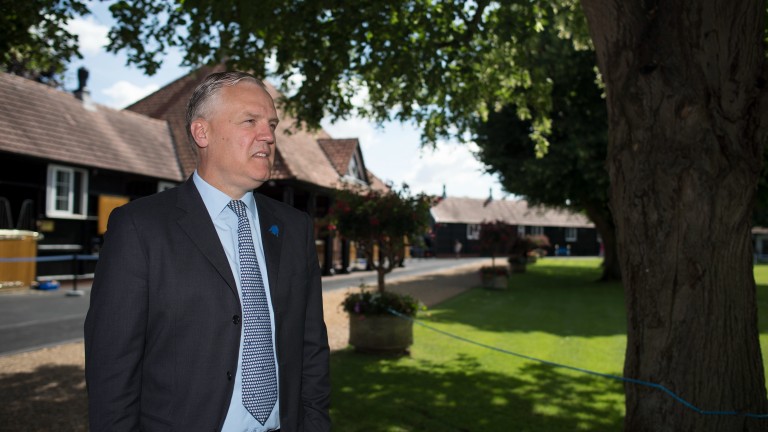 "The main objective of the restructure is to broaden the base of nominees over the coming years and to simplify the nomination process."

Nominations must be made online at www.itiea.org up until 5pm on August 15. A total prize fund of €62,000 is up for grabs, along with beautifully crafted Ani Mollereau bronzes.

As  awards ambassador, Godolphin's Sandra Hughes will be visiting racing yards and stud farms – as well as attending race meetings and bloodstock sales – in the coming weeks to encourage as many nominations as possible.

Newmarket trainers can look forward to the reopening of the town's most popular gallop, the Al Bahathri Polytrack, on Wednesday morning after a resurfacing by Jockey Club Estates costing in the region of £150,000.

The mile-long facility was closed during Royal Ascot week for a vital replacement of the surface for the first time in five years. It took just nine days to complete.

First opened in 1985, the Al Bahathri Polytrack is the busiest all-weather gallop in the town as it is in use all year and can host more than 300 horses on some work mornings, particularly when the grass gallops are unusable. 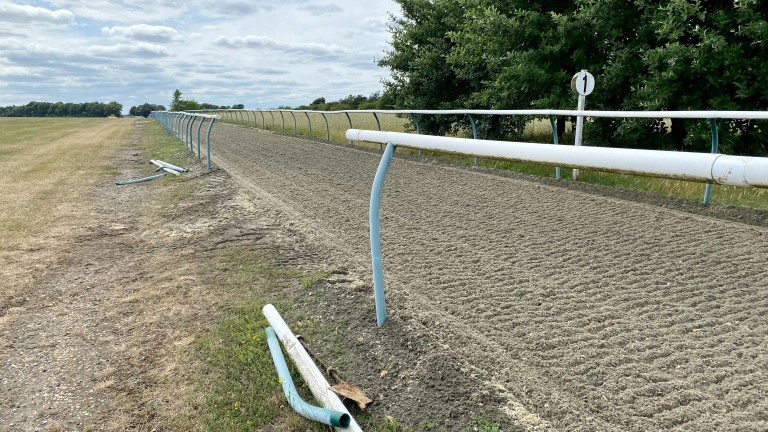 Among those trainers who use it most are John and Thady Gosden, Roger Varian, William Haggas, Sir Michael Stoute and Sir Mark Prescott.

The gallop has been relaid with a sand fibre version of Polytrack supplied by Martin Collins. It is a drier composition and is similar to the Cambridge Road Polytrack on the other side of town which more trainers have made use of this year.

Robert Achner, head of operations at Jockey Club Estates, said: "We're delighted to announce that the Al Bahathri refurbishment is complete and trainers are free to use it from 6am on Wednesday morning. The oil had broken down on the old surface and it was badly in need of replacement and it was not helped by the climate, which is all about extremes at the moment." 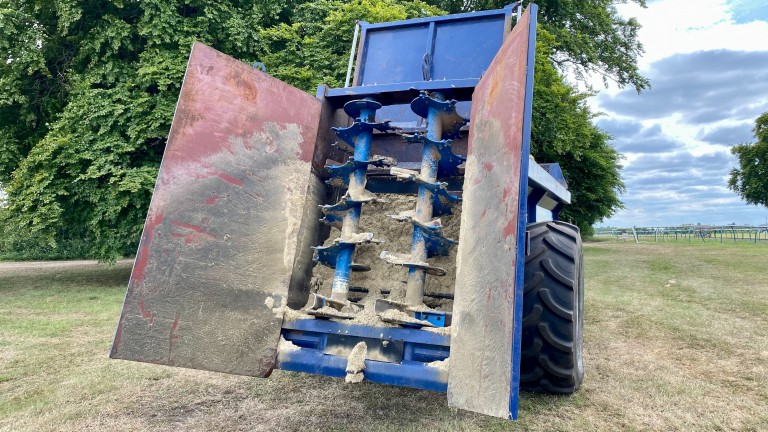 One of the massive spreaders used on the refurbishment

He added: "There's never a good time to close the Al Bahathri as it is so in demand, but we thought that during Ascot week was a decent time. The weather helped as it's a surface that you can't lay in winter and it took a bit of time to get the right consistency.

"We told the trainers who were pushing for this to be done to try the Cambridge Road facility before we started the process. They gave some positive feedback so we've attempted to get it as close to that as we can."

Nick Patton, managing director of Jockey Club Estates, said: "The all-weather surfaces are the bread and butter of the training grounds and are under constant review. We like to try and relay them every five years and hopefully the Al Bahathri can bed in and suit everybody for many years to come."