Our analysts with four horses to note, including one for late-season sales races 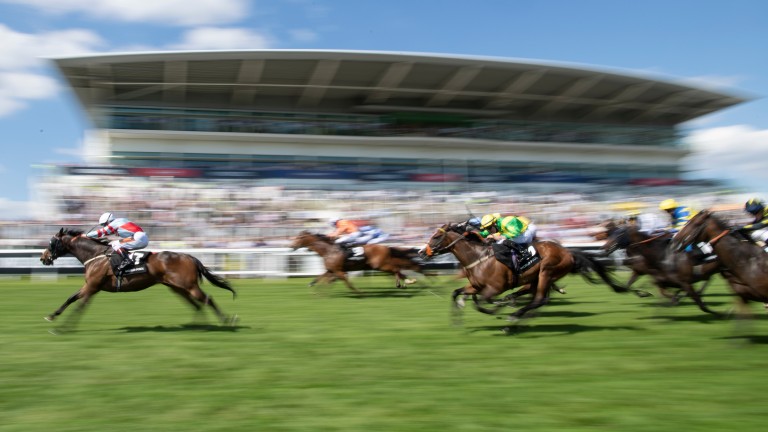 Stone of Destiny (blue, far side): finished third in the Epsom Dash and might have won with a bit more luck
Edward Whitaker (racingpost.com/photos)
1 of 1
9:30AM, JUN 8 2021

Our analysts pick out four horses who caught their eye last week. Members can view the race replays and add these horses to their Racing Post Tracker.

Gal Wonder really caught the eye with her finishing effort when finishing a length third and should live up to her fine pedigree.

The mount of Robert Havlin, she went markedly left leaving the stalls and had to be delivered wider than most, but she flashed home and should find it a formality to win a similar race before progressing up the ladder as she becomes more streetwise. [Jeremy Grayson]

Third behind a well-handicapped winner at Sligo on her previous start, Forbearance looked to have been found a good opportunity here but still won impressively to suggest she remains one for the tracker in the future.

There was much to like about how this progressive four-year-old cleared away from the field, putting the race to bed in a manner that entitles connections to target a valuable handicap.

Perhaps the Ulster Oaks – a race connections won in 2019 with Camphor – back here on June 19 could suit, albeit the best of her may well be seen over further than that 1m2½f contest. [Mark Boylan]

Augmentarium ran a blinder on her debut, coming with a dangerous-looking run on the far side of the field away from the front pair, only to be held late on by half a length.

Out of a German Group 2 winner, David Loughnane's filly is a half-sister to a couple of winners, most notably Jim Bolger's Saburo, who was a hugely impressive Curragh debut winner as a two-year-old but never ran again.

It is only a matter of time before Augmentarium also wins and, as a reasonably priced graduate of the Tattersalls Ireland sales last September, she could be one for a big sales race later in the season. [David Bellingham]

With a bit more luck in running, Stone Of Destiny may well have emerged triumphant in the latest renewal of a competitive Epsom Dash.

Andrew Balding's sprinter, whose style of racing means he's usually a hostage to fortune, was travelling noticeably strongly when repeatedly denied room from halfway. He made up plenty of ground when in the clear (away from the main pace towards the centre) to get to within two lengths of the winner Mokaatil, who conversely got the ideal tow into the race.

Although 9lb higher than when winning the Portland last September, Stone Of Destiny has a decent pot in him over 5f or 5½f when there's a strong gallop to aim at. [Richard Young]

FIRST PUBLISHED 9:30AM, JUN 8 2021
She went markedly left from the stalls and had to be delivered wider than most, but flashed home and should find it a formality to win a similar race