William Buick opts for Master Of The Seas over One Ruler as 2,000 Guineas mount 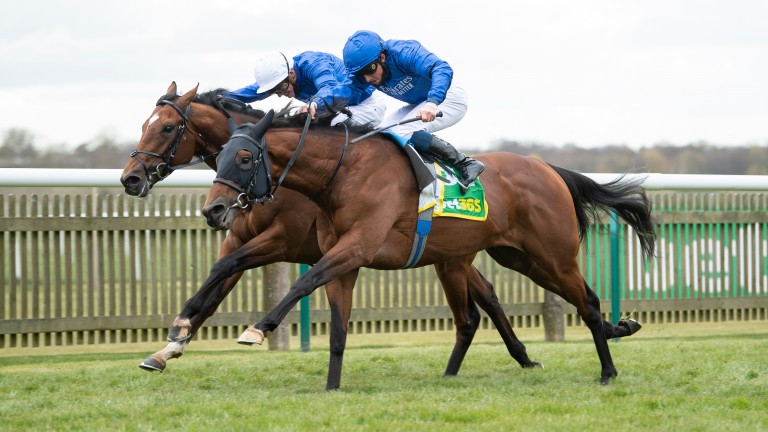 Master Of The Seas (near): Craven winner will be ridden by William Buick in the Guineas
Edward Whitaker (racingpost.com/photos)
1 of 1
By Peter Scargill UPDATED 6:15PM, APR 26 2021

William Buick will partner Craven Stakes winner Master Of The Seas over ante-post gamble and joint-favourite One Ruler in the Qipco 2,000 Guineas on Saturday.

Charlie Appleby, who trains the Godolphin duo, said Buick had come to the decision having "asked some serious questions" of Master Of The Seas, who picked up stylishly to defeat stablemate La Barrosa in the Craven having been short of room at a key stage of the race.

One Ruler was last seen chasing home Mac Swiney in the Vertem Futurity at Doncaster last October, but had plunged into joint-favouritism for the first Classic of the season following glowing reports of his home work. He will be ridden by James Doyle.

Outlining riding arrangements, Appleby said: "It wasn't an easy call for William, who rode Master Of The Seas in the Craven and then sat on One Ruler in a routine gallop at Moulton Paddocks last week.

"William asked some serious questions of Master Of The Seas in his race, and he was pleased with the response. I believed that's what clinched it in the end. Of course, the final call comes at declaration time on Thursday."

He added: "Five days out from the Guineas, I couldn't be happier with them. One Ruler has been progressing nicely at home, while Master Of The Seas has gone to the races and put the score on the board."

Appleby has used his past experiences with Masar, the 2018 Derby winner, and Pinatubo as templates for preparing his two leading lights for Newmarket, with Master Of The Seas racing in Dubai and in a trial like Masar, while One Ruler has had racecourse gallops at Chelmsford and Newmarket, like Pinatubo.

"Master Of The Seas has taken a proven path to the Guineas, and has kept progressing, but the biggest change in him came after he ran at Meydan. He strengthened noticeably," Appleby said.

"Things have also gone well with One Ruler. He is well in himself, and his work has been pleasing. Kieren Fallon, who has been riding him all winter, took him for a routine gallop at Moulton Paddocks on Saturday, and he was pleased. Kieren won the Guineas five times, so it's great to have a rider with that experience on the team."

Master Of The Seas and One Ruler were among 17 colts confirmed for the 2,000 Guineas, with Mutasaabeq boosting the potential runners to 18 after connections paid £30,000 to supplement the unbeaten three-year-old following discussions with the family of his late owner-breeder Hamdan Al Maktoum.

Mutasaabeq was clipped to 7-1 (from 8) behind 9-2 favourite Thunder Moon by Coral, whose head of PR David Stevens said: "It's far from impossible that the supplemented Mutasaabeq could challenge Thunder Moon for favouritism, such is the open nature of this season's opening Classic."

Stevens added: "By contrast to the 2,000 Guineas, the betting for the 1,000 Guineas is dominated by one filly, with Santa Barbara backed at all rates down from an opening 10-1 last month."

A number of high-quality contests are set to complement the two Classics over the weekend, such as the Betfair Dahlia Stakes, Betfair Jockey Club Stakes and Betfair Palace House Stakes.

Read more on the weekend's action:

'He's bang up there' – Mutasaabeq to be supplemented for Qipco 2,000 Guineas

FIRST PUBLISHED 3:00PM, APR 26 2021
William asked some serious questions of Master Of The Seas in his race, and he was pleased with the response

'I think he's a huge price' - leading trainers on their Jersey contenders 'He's a horse we like a lot' - Roger Varian could hold key to big-field handicap 'We can't go back to the same old programme' - racing warned over fixture list RIP Alan Shone - sadly for racing, we truly won't see his like again Emmet Mullins-trained handicapper scores by wide margin after big Friday gamble Finalists announced for Irish Godolphin Stud and Stable Staff Awards