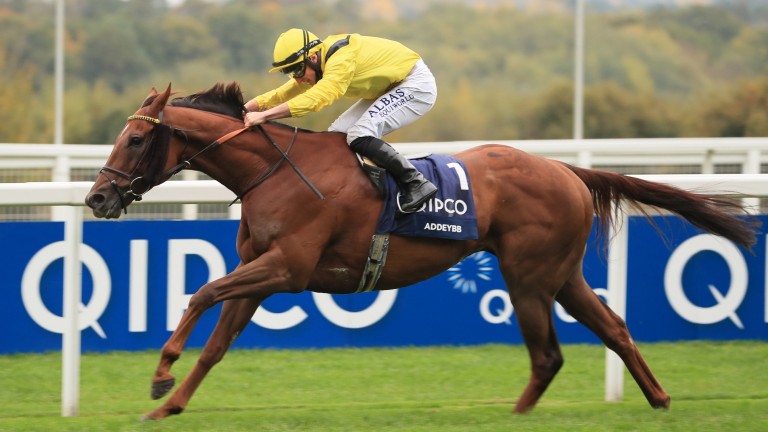 Coral-Eclipse runner-up Addeybb could be set for a return to Ascot as William Haggas outlined his ambitions to aim the seven-year-old at the King George VI and Queen Elizabeth Qipco Stakes this month.

The race would represent a step up in trip for Addeybb, who finished three and a half lengths behind St Mark's Basilica at Sandown on Saturday.

Haggas said on Sunday: "He's great this morning. I was very pleased with him because I don't think he was totally at his best, but he really stuck on well and was up for it.

"We've still got to discuss it with the owner but my gut feeling is now is the time to have a go at a mile-and-a-half race and his record at Ascot is very good. The King George is very much in my mind, provided the word soft is in the going description."

See the full result and replay of the Coral-Eclipse

The son of Pivotal, who runs in the colours of Sheikh Ahmed Al Maktoum, has won three times at Ascot, including when landing the Group 1 Champion Stakes in October.

It would be Addeybb's first attempt at the King George but his trainer is optimistic about the challenge, especially after jockey Tom Marquand gave the plan his seal of approval on Saturday.

"I've no idea about him going a mile and a half but he stays a mile and a quarter well and we've always thought about stepping him up in trip, so I think this is the opportunity," added Haggas.

"When I asked Tom what he thought after the race on Saturday, he was up for it too. Provided Sheikh Ahmed is in agreement, I think that's where he might go."

Addeybb, who is available at 20-1 generally for the King George, could take on Derby hero Adayar, Coronation Cup winner Pyledriver and the Aidan O'Brien-trained Love at Ascot on July 24.

Eclipse analysis: excuses for Mishriff but quick ground no worry for St Mark's

FIRST PUBLISHED 7:00AM, JUL 5 2021
He stays a mile and a quarter well and we've always thought about stepping up in trip, so I think this is the opportunity

Saffron Beach impresses on Limekilns as Kirby goes through the gears 'He clearly loves all the fuss' - meet and greet the friendly Ouzbeck at Newbury Arc favourite Tarnawa 'in great shape' despite Dermot Weld worries 'We'll probably ride him more aggressively' - Ed Bethell's weekend thoughts Saturday racing preview: Ayr and Newbury in the spotlight 'Everyone needs a day off' - Ed Bethell issues warning over 2022 fixtures