Murphy set for another jockeys' championship after Chelmsford four-timer 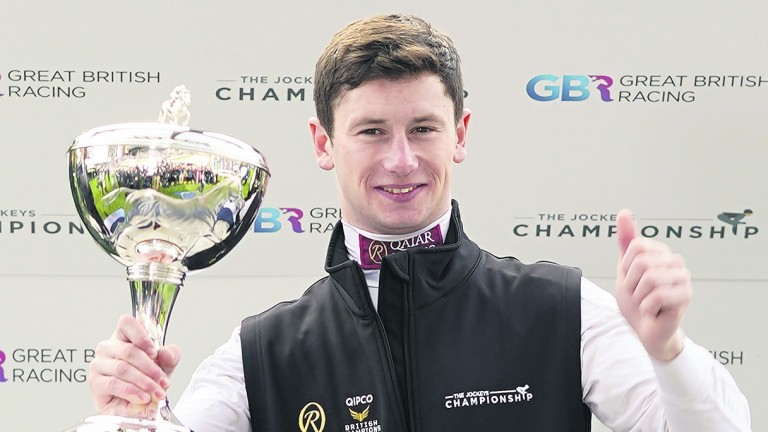 Oisin Murphy: looks set to retain his jockeys' championship crown after a four-timer at Chelmsford on Thursday
Alan Crowhurst (Getty Images)
1 of 1
By Matt Rennie UPDATED 9:12AM, OCT 31 2020

Oisin Murphy has swung the battle between him and William Buick for the Flat jockeys' championship firmly in his favour after he rode a remarkable four-timer at Chelmsford on Thursday.

Buick had clawed back two wins at Lingfield earlier in the day to place some pressure on Murphy, however he fired back in terrific style to take his tally to 134 winners this season and 11 ahead of Buick before the final Flat meeting of season at Doncaster a week on Saturday.

Murphy got the winning ball rolling with Dancing Rave in the 7f claiming stakes before he swept up the next two races in succession on Eagle Queen and Noble Queen respectively. His final winner came on Pax Britannica in the 1m6f handicap and came close to a five-timer when he was narrowly touched off in the finale.

With just over a week left until the championship reaches its conclusion and the likelihood of both jockeys being in action at the Breeders' Cup next weekend, Murphy looks to have put the title race to bed and retain the crown he won for the first time last year.

It has been another landmark year for the reigning champion, who gained his first Classic success with Kameko's victory in the 2,000 Guineas, and he also rode his 1,000th winner in Britain.

Speaking about reaching that milestone this week, Murphy said: "When you start out as an apprentice you hope you can get a licence and then ride a winner and so on. Hopefully I can ride 1,000 more in the future. I ride good horses all over the world and I’m very privileged to do that."

Both Buick and Murphy have six booked rides at Newcastle on Friday.

FIRST PUBLISHED 9:14PM, OCT 29 2020
It has been another landmark year for the reigning champion, who gained his first Classic success with Kameko's victory in the 2,000 Guineas