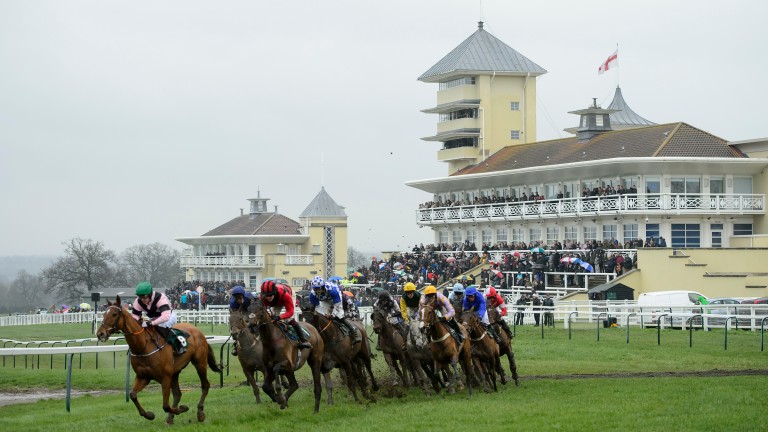 Towcester: just three members of staff have been retained at the course
Edward Whitaker (racingpost.com/photos)
1 of 1
By Bill Barber UPDATED 6:49PM, NOV 12 2018

The BHA will prioritise what happens to Towcester's horseracing fixtures this autumn following the news that accountancy firm KPMG has been appointed as administrators for the crisis-hit course where 134 staff have been made redundant.

A skeleton staff of three people has been retained to help Mark Orton and Will Wright from KPMG’s restructuring practice as it seeks a buyer for the business and its assets.

It was announced last week the course, which stages both horse and greyhound racing – including that sport's premier event, the Star Sports Derby – was in trouble and was to be placed in administration.

KPMG was appointed on Tuesday with Towcester's full-time staff called to a meeting the following day, it is understood.

A BHA spokesman said: "We are saddened to hear of the formal appointment of administrators at Towcester racecourse and the many staff there who have been made redundant as a result. We hope that those staff who worked on the racecourse side can find jobs elsewhere in racing, should they wish to.

"We will now work with the racecourse and administrators regarding the process they intend to follow from this point and offer our assistance and support. Towcester has a proud racing heritage and no one wants that to come to an end, but it's for the administrators to make decisions on the future of this business."

Towcester has three horseracing fixtures remaining in 2018, in October, November and December.

The BHA spokesman added: "In the meantime we will consider how this affects the racecourse licence in the short term, and their forthcoming fixtures.

"As a priority we will be seeking to determine what happens to the fixtures which are scheduled this autumn and we will determine whether they can go ahead or whether we need to try to find an alternative home for them."

KPMG said Towcester had experienced "significant financial difficulties" and that directors had been working with shareholders and stakeholders "to identify a workable long-term solution".

Orton added: "Sadly, this has not been possible and as a result the directors have taken the difficult decision to place the company into administration. This, unfortunately, resulted in the redundancies which have been announced today. We will be working with all affected employees and the Redundancy Payments Office to ensure the full range of support is available.

"We will also be exploring the possibility of securing a sale of the business and its assets and would encourage any interested parties to contact us as soon as possible."

FIRST PUBLISHED 6:48PM, NOV 12 2018
We will also be exploring the possibility of securing a sale of the business and its assets and would encourage any interested parties to contact us