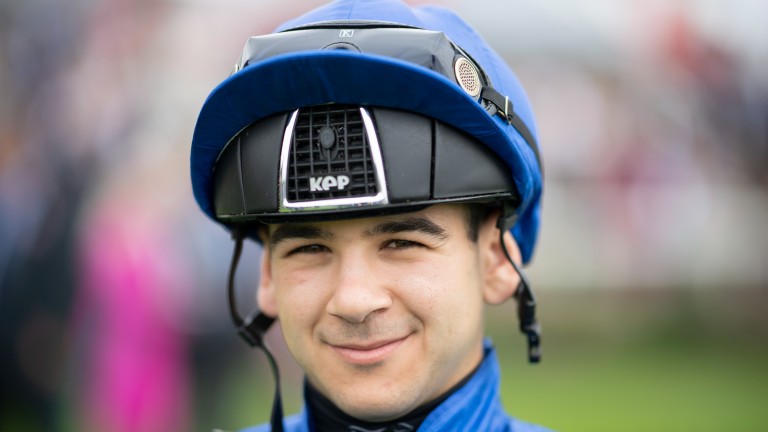 Marco Ghiani will be at Qipco British Champions Day at Ascot on Saturday whether he has a ride or not as he will be crowned champion apprentice following a meteoric Flat season in which he rode out his claim and partnered his first Royal Ascot winner.

Before racing on Wednesday, the jockey had recorded 51 winners in the championship, 16 clear of Saffie Osborne, having made the most of the opportunities provided by his boss, Stuart Williams.

The 22-year-old could well have returned to his native Italy were it not for his previous boss Luca Cumani, who persuaded him to stay in Britain when he was struggling to make an impact early on.

After Cumani retired at the end of 2018, Ghiani switched to fellow Newmarket trainer Williams and has not looked back. The jockey will become the first Italian since Frankie Dettori in 1989 to land the apprentice title, won for the last two years by Cieren Fallon.

The highlight of his season was a first Royal Ascot winner aboard the Saeed bin Suroor-trained Real World in the Royal Hunt Cup.

Ghiani said: "It was amazing to ride a Royal Ascot winner and I couldn't believe it until we were coming back in. I didn't want to get off the horse. There aren't too many apprentices who have ridden a winner at the meeting so it was a great thrill and for it to be in the Godolphin colours and for Saeed bin Suroor was incredible." 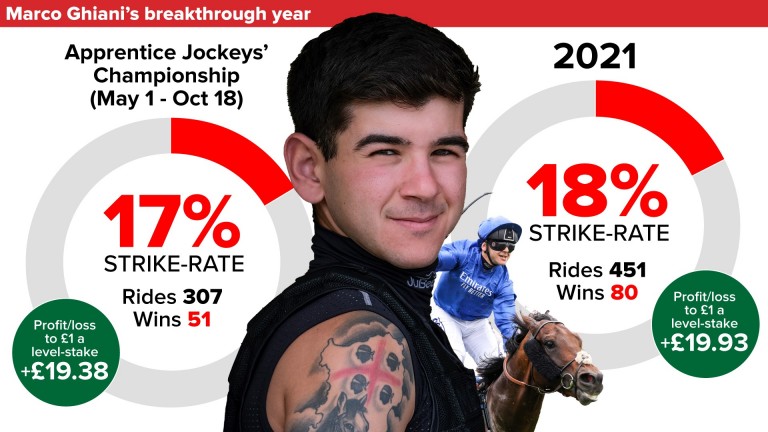 Ghiani, who became a father for the first time in May, said: "I owe Stuart Williams everything. He raised me up and gave me my first winner and lots more since. When I had my fall from Papa Stour at Lingfield in the summer he told me to keep my chin up and keep smiling, which I like to do anyway."

At 16, Ghiani started out at the British Racing School and has been back there in recent years as a pupil to riding coach Michael Hills, who said: "Marco's always had soft hands and a nice way of riding. He's very strong, a bit like Popeye if you like. We had to look after his weight but he's worked hard and is reaping the rewards."

Hills, who is also a former champion apprentice, added: "Stuart Williams has been massive for Marco. He's supported him from day one. He's backed him with good rides and advice, and has given him every chance. If you're a good rider with no support then you can't show you're skills, which is where Stuart has been brilliant."

Ghiani is hoping to get a ride at Ascot on Saturday, with his agent Sashi Righton trying to get him a mount in the Balmoral Handicap.

Looking ahead, the jockey said: "My aim is to ride as many winners as I can and for as many big trainers as I can in 2022 and beyond."

As to the next generation, his son Louis is already on the ladder to be follow his footsteps in the saddle, and Ghiani said: "Louis has had a sit on my girlfriend's pony and he's not yet six-months-old. He's been to the races and to the sales. Most of all I look forward to seeing him there on Saturday with that trophy in my hand."

FIRST PUBLISHED 11:00AM, OCT 13 2021
I owe Stuart Williams everything. He raised me up and gave me my first winner and lots more since