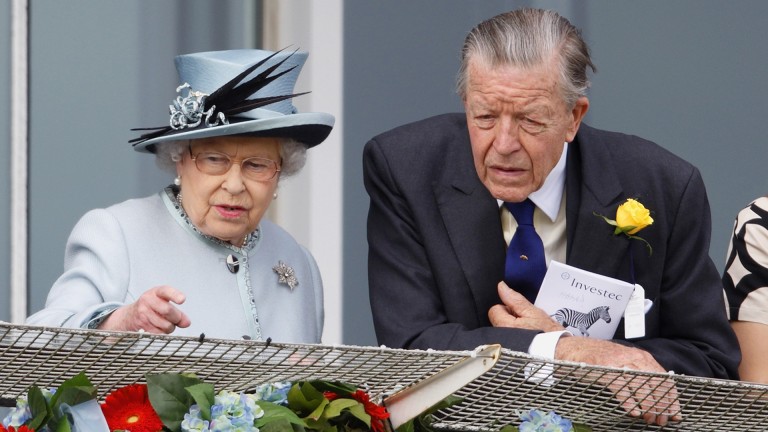 Sir Michael Oswald: a longstanding adviser to the Queen and the Queen Mother
Max Mumby/Indigo
1 of 1
UPDATED 2:00PM, OCT 22 2021

A thanksgiving service for Sir Michael Oswald, who held a key racing advisory role for the Queen Mother and the Queen, will be held in London on March 25, 2022.

Sir Michael died in April aged 86 following a career in which he acted as racing manager and jumps adviser to the royals, as well as serving as manager of the Royal Studs for 28 years.

The service will be held at 11am at St Clement Danes in London, with an opportunity for those attending to meet afterwards provided they hold an admission card.

Those wishing to find out further information and about gaining an admission card can do so by emailing michaeloswald1934@gmail.com.

Chapman hopes to be back next week

Jockey Ross Chapman, who escaped serious injury in a nasty incident at Carlisle on Thursday, hopes to be back in action next week.

Chapman suffered a fall at the fourth-last fence on Louis Vac Pouch in the 3m2f handicap chase and appeared to be kicked by Mance Rayder. After being treated by the on-course medical team, the 25-year-old was taken to hospital in Carlisle for further assessment.

Speaking on Friday, Chapman said: "Everything was all right at the hospital last night. I'll probably take a few days off and then I'll have to pass a concussion test, which is in seven days' time."

Chapman, who has ridden a total of 128 winners, started the season brightly by racking up eight victories, but has not had a winner since July.

Bass takes over from Johnson as PJA jumps president

The multiple Grade 1-winning jockey takes over from Johnson, who had held the post from 2015 until he retired in April, and becomes the fifth jockey to fill the role, which has also been held by Peter Scudamore, Richard Dunwoody and Tony McCoy.

Bass said: "It was humbling and flattering when I heard my name had been put forward by some colleagues as a potential successor to Dickie. I discussed the role at some length with Jon Holmes and Paul Struthers, and sought views and advice from others, and decided to go for it.

"It is an honour and privilege and not a responsibility I take lightly. There are many challenges and opportunities – both for the sport and for my colleagues – and I'm really looking forward to working with Jon and the PJA team."

The PJA has also confirmed a restructure of its board, which will be made up of 12 members who will be supported by a newly created Jockeys Advisory Group made up of six riders from each code and two new non-executive directors, owner-breeder Simon Cox and former Manchester United footballer and broadcaster Paul Parker.

The Racing Foundation and the Thoroughbred Breeders' Association (TBA) won an award at the British Association for Sustainable Sport (Basis) awards on Tuesday.

The Environmental Impact of Stud Farms Assessment project took the prize in the innovation, initiatives and products category, beating nominees from the football and sport manufacturing industries. It is the first time the horseracing industry has won an award in the environmental sustainability sector.

Rob Hezel, chief executive of the Racing Foundation, said: "We are delighted that the TBA’s project has won an award at the Basis awards.

"Environmental sustainability is crucial for horseracing's long-term future and we were delighted to fund the project.

"The Racing Foundation’s 2021-2023 strategy includes environmental sustainability as one of its key funding areas and this TBA study was the first application of its kind we received.

"We hope this study and its recognised success will build momentum and be the first of many applications for the funding of further research, resourcing and initiatives to enhance sustainability throughout the thoroughbred sector."

Taunton to stage hurdles and bumper card next week

Taunton's meeting on October 27 will be a hurdles and bumper card with the chase races cancelled to help aid watering following insufficient rainfall at the track.

Two races over fences had been scheduled, but they will be replaced with an additional hurdles contest on the six-race card to allow racecourse staff to focus exclusively on watering the hurdles course, with no further rain expected before the fixture.

Entries for the meeting will be taken on Thursday before declarations are published on October 25.

Stud and stable staff will be granted free admission to Newbury's meeting on Saturday as part of Racing Welfare's dedicated week on British racing's workforce.

Those planning to attend the Virgin Bet-backed fixture, which includes the Horris Hill and St Simon Stakes, will be allowed entry with a valid stable pass or letter from their employer.

Access to the track's Oktoberfest party, which includes a DJ set from Jamie Insole, assistant to Classic-winning trainer Charlie Hills, is also included.

"I'm looking forward to playing at Newbury for the final Flat meeting of the year and for Racing Welfare's Racing Staff Week," Insole said.

"Racing staff put so much effort into the industry and without them we couldn't enjoy watching these amazing horses race. Sometimes their work is overlooked but this week helps to highlight the importance of all racing staff across the country."

FIRST PUBLISHED 6:36PM, OCT 17 2021
Sir Michael died in April aged 86 following a career in which he acted as racing manager and jumps adviser to the royals