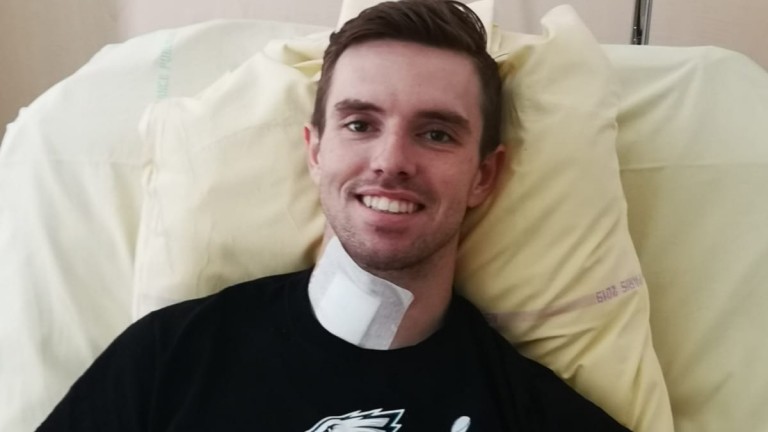 Jacob Pritchard Webb knows he will never race-ride again after picking up a horrifying list of neck and spinal injuries in a fall at Auteuil last month, but that has not stopped the 23-year-old from already planning a new future in the sport.

Pritchard Webb was an aspiring British jump jockey who like many moved to France to further his career. But a fall from Galant Des Boulats during the opening chase of the meeting on June 23 has ended that dream. However, he already has a new ambition – to become a bloodstock agent once his rehabilitation is complete.

The distance from Auteuil racecourse to the Georges Pompidou Hospital is a short one in terms of distance, although for Pritchard Webb the trip last month marked the start of what will certainly be a long road to rehabilitation and recovery.

"In the accident I broke my T4 and T6 verterbrae; I dislocated my C6; I broke four ribs; I broke my sternum and I damaged a lung," says Pritchard Webb, who has been attached to Emmanuel Clayeux's jumps yard in central France since September last year.

"The operation on the Tuesday [of the fall] was for my T4 and T6, by fusing my T2 to T8 with titanium rods. From those injuries I was left paralysed from the middle of my back down."

"On the Thursday they decided to realign and fuse my C6 and C7. They have been monitoring my lungs and my chest, while there's nothing they can do for my sternum and ribs, they just have to heal naturally."

Doctors have told Pritchard Webb that there is a range of outcomes in terms of how much mobility he might regain, and much will depend on what long-term nerve damage is revealed when the initial trauma subsides.

His father Matt says: "There's still spinal swelling but his spinal cord is intact. It was compressed and there's still swelling around there, so it's a time thing to see what happens."

With three early winners on the board in this disjointed season, Pritchard Webb would have every right to cast a rueful look backwards. But his own positive nature as well as the outlook of the medical staff and his family mean the focus is on the future.

"We're progressing slowly but surely," he says. "People tell me I'm a lot brighter now. It's obviously going to be a long and slow process.

"I've started physio. I had a bit of problem with saliva because my lungs aren’t working properly and I don't have the use of my diaphragm to aid it. They've been working on that.

"They've been trying to go through what I can feel in my legs and lower belly and asking me to help them. They've had me out of bed into a chair for a couple of hours at a time.

"The doctors, the medical staff and the surgeons have been fantastic. I was probably quite lucky to have such a serious injury at Auteuil rather than at a small provincial track as I was so close to very good hospitals in Paris. The fact they were able to operate so quickly and successfully has been a massive benefit." 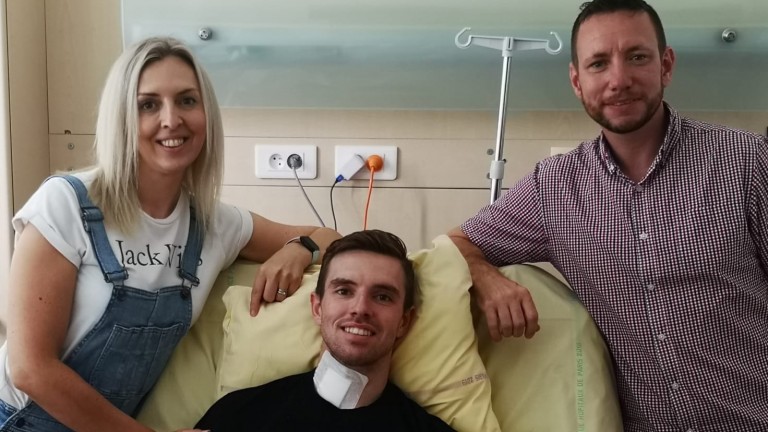 For Matt and Kelly Webb the confirmation that life was about to change came after watching their son's fall live on television at home in Leicestershire.

"Fortunately Felix de Giles is a good friend of Jacob's and managed to get into the ambulance with him," says Matt Webb. "When my wife tried him on the phone he was able to confirm it wasn't good.

"We simply jumped in the car and were with Jacob by half past nine that night."

An airline pilot, Webb is currently on furlough due to the Covid-19 pandemic, while the virus will be a factor in the family's next steps.

"We've got a couple of plans in place for the next stage," says Webb. "There is a very good spinal hospital not far from here. The situation is complicated by the coronavirus. At the moment if he came back home we wouldn't be able to visit him.

"If he is over here we can visit and support him mentally and emotionally. And the care over here has been very good. Jacob took some advice and if there is a hospital here which focuses on spinal rehabilitation then it makes sense."

While walking again is not outside the range of outcomes, riding racehorses will not be an option, so he has already turned his mind to other ways of staying in the industry.

"Jacob wants to become a bloodstock agent and he knew two days after the accident that's what he wanted to do," says Webb. "He's already reading books and stallion guides. He's really getting stuck into it and is very positive."

FIRST PUBLISHED 4:15PM, JUL 7 2020
We simply jumped in the car and were with Jacob by half past nine that night