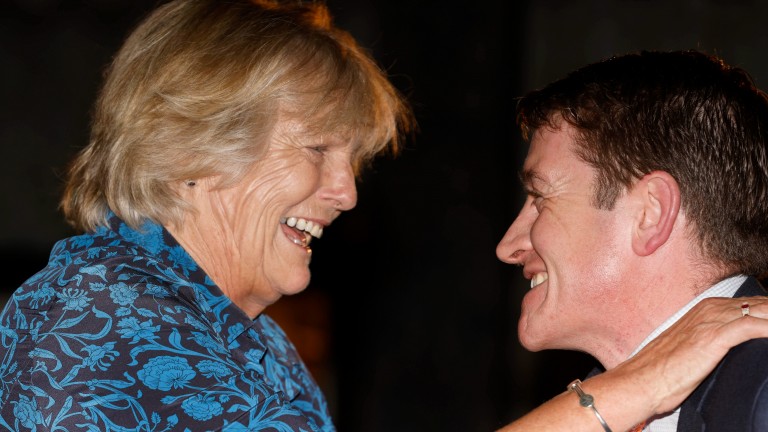 Trainer Jessica Harrington became the latest recipient of the Sir Peter O’Sullevan Annual Award at a ceremony in London on Thursday.

Legendary commentator Sir Peter died in 2015 but chose future recipients of the award, meaning Harrington first knew of it 18 months ago, before the Covid pandemic led to the cancellation of last year’s lunch.

“It’s been a long wait and my initial reaction was to say, ‘Sure you haven’t made a mistake?’ I’m very honoured to have my name in highlights beside my heroes,” she said.

Harrington has trained since 1989, winning more than 40 Grade 1s over jumps and becoming a Classic-winning trainer on the Flat. Interviewed by former jockey Barry Geraghty in a pre-prepared video she was asked about her role as a pioneer in the sport.

“I’m still disappointed there are not more women trainers but we’re getting there,” she said. “When I started there were no women clerks of the course, clerks of the scales or stipendiary stewards – it was very much male-dominated. Hopefully I’ve influenced some people.”

O’Sullevan’s charitable trust has distributed £3.5 million to selected equine welfare charities and other projects since the 2019 award lunch. Since the trust’s inception in 1997, the total donated by trustees is close to £13m. Eight lots in a charity auction at Thursday’s lunch added a further £87,000.

Among the projects assisted are Peter O’Sullevan House in Newmarket, the Racing to School education programme and mental health film The Fall, as well as the six core charities including Racing Welfare, World Horse Welfare and the British Thoroughbred Retraining Centre.

Confirmed runners and riders for the Ladbrokes Trophy and Fighting Fifth