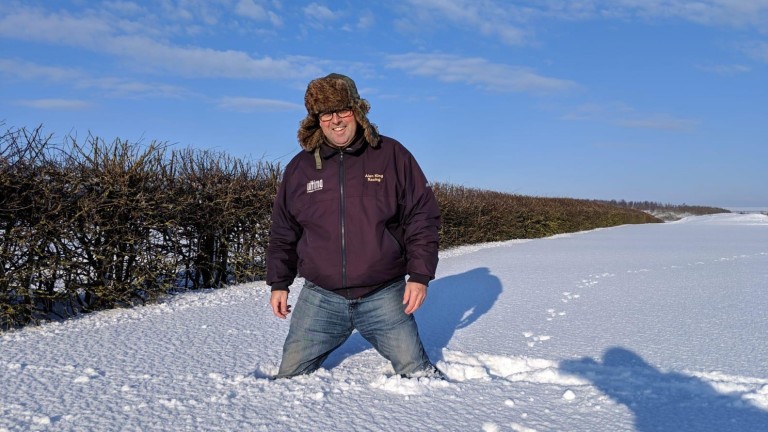 Snow that Alan King reckoned to be the heaviest for nearly two decades forced the trainer to give up hope of sending horses to the races on Saturday.

He called the decision to withdraw his two runners at Sandown and one at Lingfield a no-brainer.

"They can't get off the place," said King, who is based at Barbury Castle in Wiltshire. "It's the most snow we've had in the 18 or 19 years I've been here.

"We have to clear four or five miles of little lanes. We did that yesterday and they filled back in again.

"You can get through in a four-by-four or a tractor but a horsebox is a non-starter, and cars wouldn't get out either."

But King, who had been due to run Praeceps and Full Glass at Sandown and Miss Crick at Lingfield, was able to exercise his string despite the weather.

"These things happen and everything has been out," he said. "We've cantered in the snow and we haven't missed any exercise."

Mick Appleby, Richard Hannon, Ken Cunningham-Brown, Alexandra Dunn and Harry Dunlop were among others forced to withdraw runners due to travel problems.

Lambourn-based Harry Whittington took Bigmartre out at Sandown and said: "We always get it worst because we're on top of the hill.

"There was only one vehicle that could get in and out and that was my Land Rover Discovery – that was ferrying all the staff from Lambourn so they could get in and do the horses. A horsebox would have had no chance, there's two or three feet of snow."

But the weather did not interfere with Saint Calvados's bid for the Ladbrokes Dublin Chase at Leopardstown.

"We were lucky," Whittington said. "We left at 7am on Thursday and there wasn't any snow at all then."

Monday's meeting at Carlisle is the latest to be threatened by the cold weather. The track was reported to be "frozen solid" on Saturday and an inspection will be held at 9am on Sunday.

The only other jumps meeting scheduled for Monday, at Taunton, is also subject to an inspection, in its case at 7.30am on raceday.

Clerk of the course Jason Loosemore said on Saturday: "There's a lot of snow and there's a hard frost forecast tonight but we want to give it every opportunity as it could get up to +8c or +9C tomorrow and we may get rain."

Get exclusive insight from the track and live tipping with Raceday Live, our up-to-the-minute service on racingpost.com and the Racing Post mobile app

FIRST PUBLISHED 11:05AM, FEB 2 2019
You can get through in a four-by-four or a tractor but a horsebox is a non-starter and cars wouldn't get out either