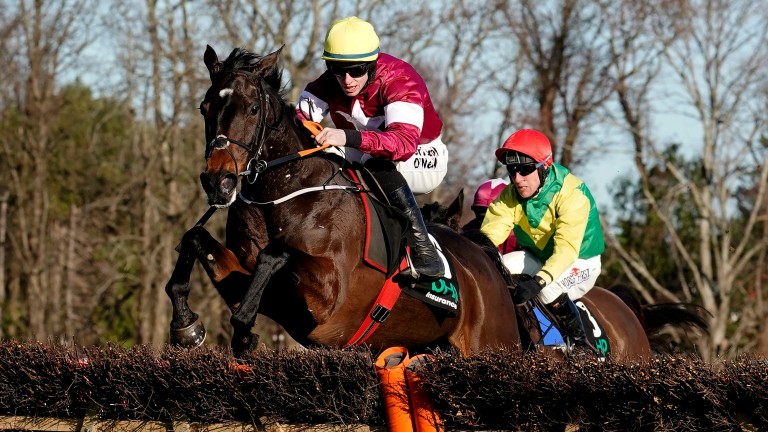 A tilt at the Unibet Champion Hurdle for Apple’s Jade is looking increasingly likely after owner Michael O'Leary said her emphatic triumph in the Irish version is swaying him towards a marquee showdown with Buvuer D'Air at Cheltenham.

Apple's Jade's trainer Gordon Elliott had earlier on Sunday intimated he would like to roll the dice in the open championship event next month with the ten-time Grade 1-winner, suggesting that it "would probably be mad not to" following her 16-length destruction of the previous two winners of the BHP Insurance Irish Champion Hurdle Leopardstown on Saturday.

O'Leary's thoughts on the matter were not in the public domain at that stage, but he has now given the strongest indication yet that the brilliant mare will tackle the Champion Hurdle rather than the OLBG Mares' Hurdle on March 12.

"The situation is, we were genuinely surprised by how well she ran yesterday," he said.

"I thought she'd be beaten by Melon – coming back to two miles on ground that was too fast for her given she stays three miles – but she was so good you’d have to look at the Champion Hurdle on the back of that.

"We won’t make a decision until Cheltenham week and we'll see how she is, how everyone else is and what else we have going, but if she is all right and the ground is okay, it’s probably 75-25 she’d run in the Champion Hurdle.

"Would she beat Buveur D’Air? Probably not, but she's entitled to try now. If she's in the same form in five weeks' time, it would be very difficult not to let her take her chance.

"If you are going to lose, I’d rather lose trying to win a Champion Hurdle than a Mares’ Hurdle, now that we know she can run a fast two miles."

On Racing TV on Sunday morning, Elliott told Nick Luck: "Buveur D'Air is obviously a very good horse and just does what he has to do every day, but we’ll take him on. Nothing is concrete, but I'd say it's likely."

He said: “The mare was fine this morning and I'm leaning more towards the Champion Hurdle.

“You should never be afraid of one horse, and I’m also waiting for Laurina to run, but after Apple’s Jade performance yesterday you’d have to give the Champion serious consideration.

“She got beaten in the mares' race last year and if she’s going to be beaten again at Cheltenham, you’d rather it happened in the Champion Hurdle.

"That's the way it is but Cheltenham is still five weeks away. We’ve made no decisions and there’s still plenty of time."

On Saturday, Apple’s Jade victims included last year's winner Supasundae and the 2017 victor Petit Mouchoir, as well as Melon, who got to within a neck of Buveur D'Air at Cheltenham last March.

Her yawning winning distance was the widest margin of victory in the history of the Irish Champion Hurdle, first run in 1950.

Apple's Jade, who finished a disappointing third in last year's Grade 1 Mares' Hurdle at Cheltenham, is now disputing favouritism for the Champion Hurdle with dual winner Buveur D'Air, her odds ranging from 7-4 to 5-2.

Laurina, whose price for the Champion Hurdle varies from 7-2 to 6-1, is likely to make her second appearance of the season in the 2m4f Listed Coral Quevega Hurdle at Punchestown on February 20.

Her trainer Willie Mullins said: "There are a few races Laurina could run but the Punchestown race is the most likely. At this stage it looks as if she'll run in the Champion Hurdle, rather than in the Grade 1 mares' race at Cheltenham."

According to Mullins, the Mares' Hurdle at the festival will again be the target for Benie Des Dieiux, who won the race last year. The eight-year-old has not run this season but will reappear in the Red Mills Trial Hurdle at Gowran Park on February 16 or the Ladbrokes Ireland Boyne Hurdle at Navan the following day.