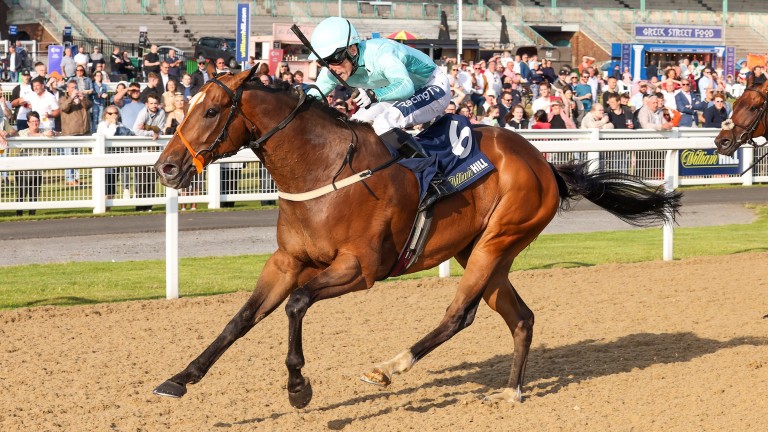 Whatever else they might say about the William Hill Racing League, nobody can possibly claim it is fixed.

Sky Sports Racing were out in force as three years of planning, speculation and conjecture finally ended and the first runners thundered home in the first race of the £1.8 million team series.

It was a big day for the channel, which will be showing six £50,000 races every Thursday night until September.

No fewer than four presenters were at the track rehearsing from well before teatime and, as Saluti returned after his historic opening night triumph, it was Leonna Mayor who got to interview the winning jockey . . . who is sponsored by Racing TV.

Paul Mulrennan laughed about being interviewed by his backer's rivals but did not hide his admiration for the project after success in the 5f handicap earned his mount nearly ten times as much as he had won after scoring at Nottingham in June.

"This is brilliant," he said. "A lot of money has been pumped into our sport and it can't be anything but good. Look at the prize-money this horse has been running for on his last three runs – buttons. Tonight he's won £25,000."

The jockey added: "There's a real good buzz in the weighing room. The teams make it a bit of fun and it's not like a normal Thursday night at Newcastle. There are a few people not happy they weren't able to compete this year but it may be their turn next year."

The lurid aquamarine silks of Team Arena would certainly have taken the casual viewer's eye off the Racing TV logo on Mulrennan's breeches and that was no accident. Racing League founder Jeremy Wray said before racing he hoped the things they were doing differently would have an impact, such as the colours and the jockeys' names on the back of them. 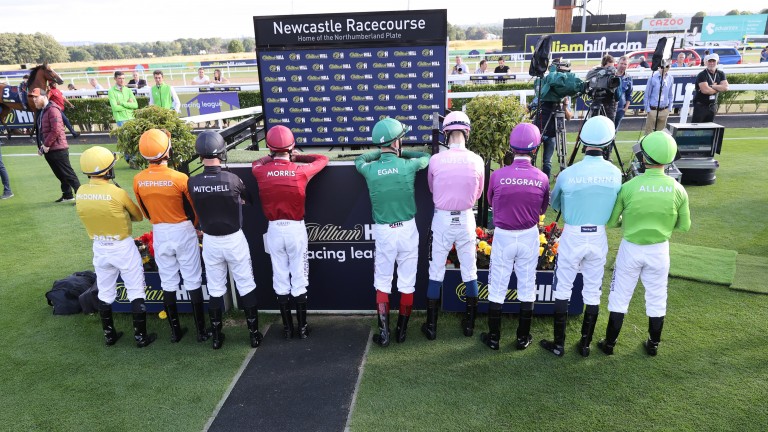 The jockeys show off their Racing League silks at Newcastle
John Grossick (racingpost.com/photos)

It was certainly different to see one Yorkshire powerhouse cheer success for another as the Richard Fahey-trained Strike Red won the 6f handicap for eToro Racing – managed by William Easterby.

"It's just on a Thursday night!" laughed Tim Easterby's son. "But it's been really easy working with them and it's a fantastic idea. The owners have really enjoyed the day and it's a lot of prize-money. It's great for the sport to get more publicity and to try to get more people interested."

Views from the sofa: 'Racing is not, and never will be, a team sport' (Members' Club)

That team spirit delighted Wray, who had the idea for this type of series three years ago and admitted on opening night: "We've waited that long to get here, it's almost a relief. But there's already banter between the teams. One team was top of the league and they showed it again and they'd dropped down – as Darren Gough said on talkSPORT, people love a league table, it's as simple as that."

(Newmarket Red ended the night on top of the leaderboard, with Team talkSPORT in second.)

Not that he is set to bask in the glory of a successful start, as Wray said: "I've had the phone going mad with lots of new ideas about what we should be doing. That's how it evolves. Like T20, we'll make lots of little changes."

Hexham manager Robert Whitelock, who had come to see what all the fuss was about, had a couple of suggestions.

"It's a great concept, the prize-money is wonderful, but they possibly need to try to do more to engage the crowd and explain about the teams," he said.

"But that's constructive criticism and there's no reason why it couldn't work over jumps. If they are keen to expand it over jumps and have a winter league, I'm sure we'd be quite keen to take part!"

Six of the 48 available slots for trainers went begging and Professional Jockeys Association (PJA) executive director of racing Dale Gibson felt the first night showed what they were missing.

"I think those trainers that didn't apply might be wondering why they didn't," he said. "Thirty per cent of runners tonight are rated in the 70s and a lot of people have horses rated in the 70s."

All you need to know about the Racing League

FIRST PUBLISHED 6:00PM, JUL 30 2021
A lot of money has been pumped into our sport and it can't be anything but good

One trainer, one jockey, one horse and one race to watch on Saturday Family firing up Soumillon as he chases third Arc on Longchamp favourite Tarnawa Memorable day for Mulrennan as 'highest-rated maiden' breaks juvenile record Keith Dalgleish restores local pride after Chichester sees off English raiders Perfect Power and Sigurd do their bit as racehorses spread joy across Yorkshire