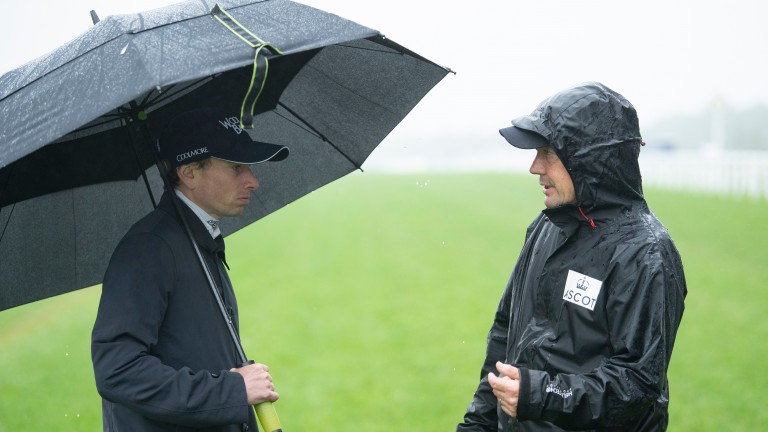 Testing ground is predicted for the final day of Royal Ascot after 43mm of rain fell in less than 24 hours turning the ground heavy from good to firm on Thursday.

Remarkably, day four of the royal meeting had to survive a prolonged inspection on Friday afternoon after heavy and persistent rain left the fixture in apparent jeopardy before it was given the thumbs up.

More showers could potentially hit the track on Saturday, but clerk of the course Chris Stickels expressed no concern about racing going ahead.

He said: "We ended up having 40mm of rain today on top of the 3mm we had yesterday. Hopefully some of that moisture soaks through but that's going to make it testing. It's heavy now.

"The forecast is for this rain eventually to die out later this evening – although it's unclear when because it keeps on circling round us – and then for a better day tomorrow.

What we learned from day four of Royal Ascot

"It's not predicted to be warm and sunny, but dry with the chance of an occasional shower. We'll review the situation in the morning."

Conditions are likely to be too soft for leading Diamond Jubilee Stakes contender Starman, with trainer Ed Walker already eyeing the Darley July Cup at Newmarket next month for his Duke of York Stakes winner.

"I'm going to speak with his jockey Oisin Murphy and owner David Ward and we'll make a decision tonight," he said after walking the course following the concluding race on Friday.

"I'd say it's highly unlikely that he's going to run and we'll wait for Newmarket, probably."

All the news on Friday at Royal Ascot:

Shergar Cup, Racing League and Sunday Series feature in another busy week 'These horses don't come around often' - Derby hero Adayar emulates Galileo ITV Racing tips: one key runner from each of the seven races on ITV on Saturday Are we looking at a Group 1 horse in a handicap? International Stakes insight Dreamloper bounces back to record emotional Valiant success Smaller crowd than usual but over 14,000 expected at Ascot for King George day