Latest PLEASED TO BE BACK

'It's a great experience' - spectators enjoy their return to racecourses 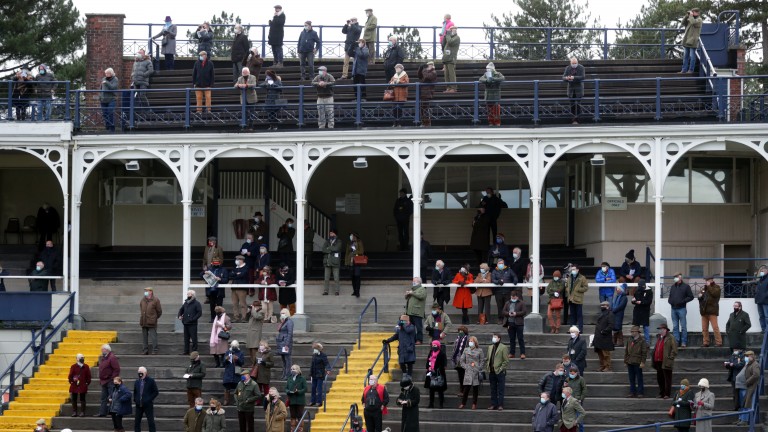 Racegoers in the grandstand at Ludlow on Wednesday
Pool
1 of 1
By Peter Scargill UPDATED 7:33PM, DEC 2 2020

Racing’s soul returned to English courses for the first time in nearly nine months on Wednesday as punters revelled again in watching live racing in what they described as a welcoming and safe environment.

The simple pleasures of a bet and a pint among familiar faces were writ large on the faces of racegoers as they gathered on track for the first time since March 16.

Small in number they may have been but members of the public who took the opportunity to attend Haydock, Lingfield and Ludlow spoke of their excitement at being a part of racing history.

However, some concerns over queues to enter the courses were flagged by spectators, with the Racecourse Association (RCA) seeking ways to smooth the process for people on arrival at future meetings.

David Armstrong, RCA chief executive, was among the crowd of approximately 650 at Ludlow, and said: “I’m impressed. We’ve got racegoers back who are enjoying themselves, getting food and drink, while the bookies seem quite busy.

"It’s still only 600 to 650 people so it’s not really yet the full-blown experience we want everyone to have, but there’s great energy from everyone. 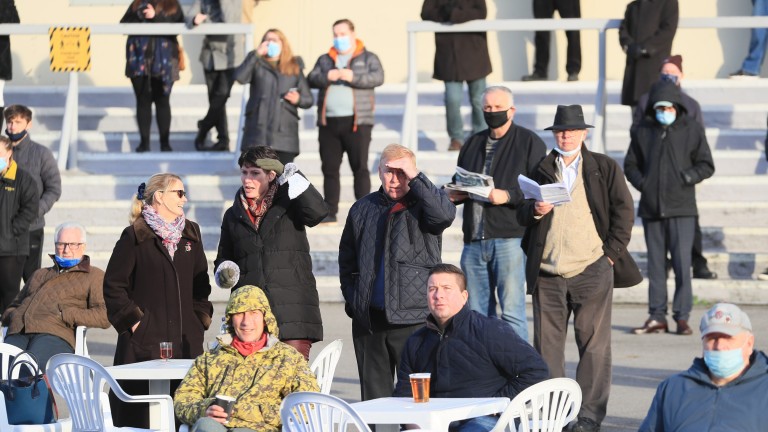 “There’s always a few things to learn from and racecourses will share the learnings with each other and get better and better. I think you’ve got to try and get the queuing right and the timing of that. There were quite long queues this morning so we’d like to get better on that.

“One of the ideas being talked about across all sports is the idea of staggering the arrival time. Essentially there’s only one point of entrance here. You don’t want people queuing too much as they can get bunched up.”

Racegoer Richard Davies, from Ledbury, had been among those to queue before getting into Ludlow, but expressed delight and satisfaction at the atmosphere and experience.

“It’s more or less what we expected,” he said. “It took a bit of time getting in but luckily we were here just in time to get our bets on for the first.

“I think everyone understands why there’s a queue. A lot of people we spoke to in the queue came later than they normally would as they didn’t know they’d be able to come in and have a coffee or anything. We brought more sandwiches too. 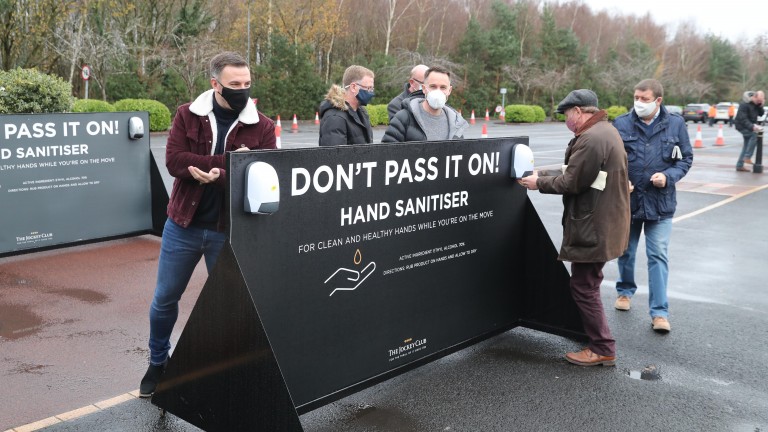 “It’s nice to come back and it’s almost as if you’ve never been away because the same people you always see are stood in the same place. We’re waiting now to find out if we can go to Cheltenham next week.”

Crowds in the hundreds came through the gates at all three afternoon meetings in England, with courses taking a cautious approach to the number of tickets sold despite up to 2,000 people being able to attend under the Tier 2 coronavirus restrictions.

Racegoers were required to wear masks when not eating or drinking, maintain a two-metre gap from people outside their bubble and to regularly sanitise their hands to help stop the spread of Covid-19.

Despite the restrictions, Simon Smith, who travelled to Ludlow from Droitwich, felt the raceday experience was an enjoyable one.

“I think it’s really good here, I expected to see more people but overall we’re really happy with it,” he said. “I knew there was one entrance beforehand so came an hour early and just walked in. I guessed they’d be a bit of a queue.

“You can get a hot drink, go to the bar so it’s a great experience. The crowd here is like any winter meeting as you’d expect, although it’s smaller. There’s a nice atmosphere and it’s great to be outside too.”

While unable to mix with people outside of their household bubbles, spectators embraced the chance to engage in a family activity as more sections of society opened in England as part of the new tiered system. 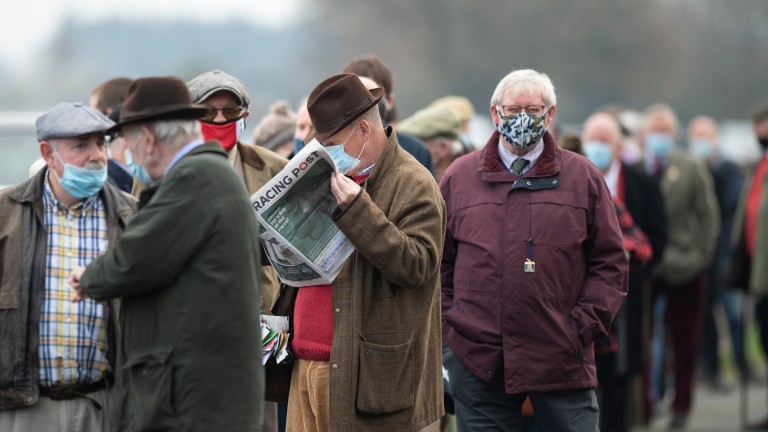 Queues at Ludlow prior to the track's seven-race card
Edward Whitaker (racingpost.com/photos)

Emma Clough, from Cumbria, was in attendance at Haydock and said: “I'm really excited about being back. I'm here with some of my family and we've all really missed the atmosphere and opportunity to come racing. It's a great family day out.”

Spectators at Haydock were able to bet with 14 on-course bookmakers, with the opportunity to work welcomed by layer Paul Garritty, who admitted to struggling with his mental health while racing took place behind closed doors.

He said: “We're just glad to be back and it's a small stepping stone towards something like normality, hopefully by the spring. We've taken a few bets but it's more about getting back to work. 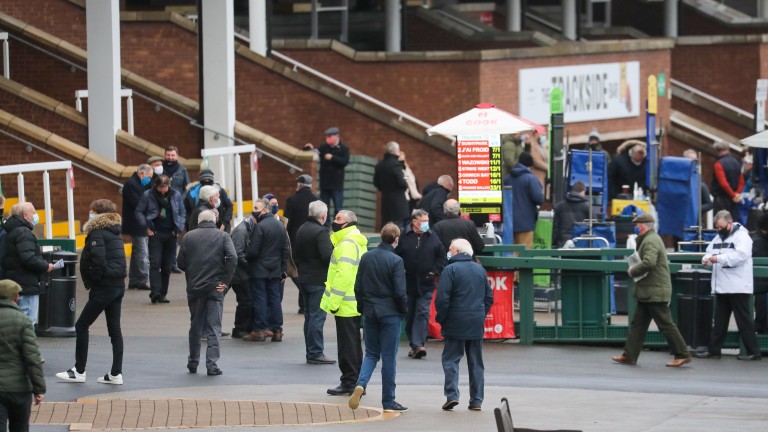 “We've not worked on-course at the races since March 15 at Carlisle. It's been a struggle, particularly mentally, as this is our livelihood and we haven't got anything else. We're hoping things will improve, it can't get worse than it's been. People will return, it might just take time.”

The prospect of larger crowds at weekend meetings and more prestigious fixtures was viewed as “a little more challenging” by Mark Spincer, racing division manager for Arena Racing Company, owner of Lingfield. However, he praised racegoers for their willingness to comply with the restrictions at the track on Wednesday.

“It’s brilliant to see people,” he said. “People are working with us. I suppose it’s a little bit of an education programme for people who haven’t been here since March and it’s different with one-way systems, protocols and procedures but the minute we’ve pointed anything out they’ve all complied.

“It might be a little more challenging on a Saturday to get the same message across but we’ll keep working. People are so delighted to be here and watch a live race and do something they love.”

Wincanton and Chelmsford are able to welcome spectators on Thursday, but not Market Rasen and Leicester, which are in Tier 3 areas. Britain's big weekend meetings at Sandown and Aintree can both have up to 2,000 spectators.

Wales's jump tracks had less encouraging news on Wednesday when the Welsh government announced that spectators will not be allowed to attend race meetings until early 2021.

A statement from Chepstow, host to the Coral Welsh Grand National on December 27, said updates about spectators would be given as soon as the track had more news.

Can I have a drink on course? Tracks take different approach to alcohol measures

FIRST PUBLISHED 7:21PM, DEC 2 2020
We're just glad to be back and it's a small stepping stone towards something like normality, hopefully by the spring