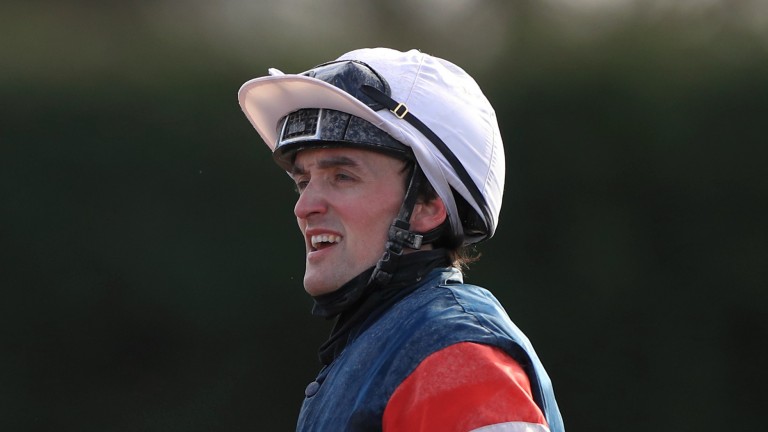 Harry Burns: stood down until at least Thursday due to a coronavirus positive
Pool
1 of 1
By Peter Scargill UPDATED 9:02AM, JAN 16 2022

Harry Burns missed out on the winning ride aboard Famous Star at Wolverhampton on Friday after returning a positive test for Covid-19.

Burns, 26, was due to partner the four-year-old, trained by Simon and Ed Crisford for Rabbah Racing, in the 2m½f handicap after striking over the same course and distance on January 3.

However, he was forced to step down from the ride with Hollie Doyle replacing him on the 8-13 favourite, who went on to capture the contest by a neck – a third win in five starts for the filly.

Burns will need to be cleared by the BHA’s chief medical adviser Dr Jerry Hill before being able to return to riding, having been placed on the medical red list, but his agent Chris Humpleby hopes the rider can return to the saddle next week.

'It's tough that Harry wasn't able to ride her'

"Harry did a couple of lateral flows and they came back positive so he had to give up the ride last night, which was a shame,” he said. “We’re pleased she won for the Crisfords because she’s a lovely filly, but it’s tough that Harry wasn’t able to ride her.

"We spoke to Dr Jerry Hill and Harry has to take another lateral flow test on Tuesday. If that comes back negative then he can return to riding on Thursday, but he can’t come back until he’s signed off as he's on the red list."

New protocols requiring anyone wanting to access the weighing room on a British racecourse to provide proof of a recent negative lateral flow test (LFT) came in on Tuesday and dovetail with existing requirements around social distancing and wearing facemasks.

The plans were due to come into force in the first week of January in a bid to limit the spread of Covid-19 and prevent meetings being called off as a result of staff shortages – as has been the case in football – but were delayed due to a national shortage of LFTs.

Burns has ridden two winners from ten rides this year and recorded his best total of 15 winners in 2021, collecting £113,249 in win and place prize-money.

It's on! Nicky Henderson confirms Shishkin for Ascot clash with Energumene