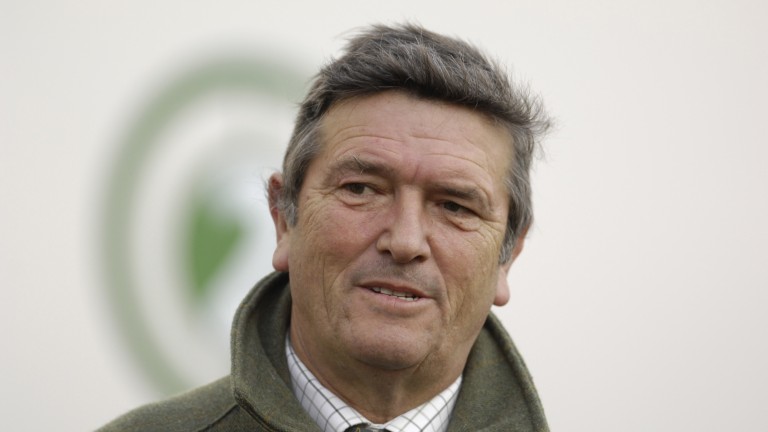 Peter Pritchard: "I'm not looking to train any more horses, I just want to enjoy my retirement"
Edward Whitaker
1 of 1
By Sam Hendry UPDATED 1:45PM, JUL 30 2021

Franz Klammer left Peter Pritchard feeling "so proud" at Stratford on Thursday night after claiming his third win in succession, following a wait of five and a half years for the trainer to have any winner at all.

It is not unusual for horses on a low mark to outrun the handicapper and rack up a hat-trick, but to do so having risen 25lb for a severely ill owner means this treble meant an awful lot more to Pritchard.

Franz Klammer is the trainer's only horse in active training and the 72-year-old, who still rides him out every day and has honed the chaser's fitness, purchased him from Charlie Longsdon in 2018.

When the nine-year-old romped home by 25 lengths at Stratford in June, it was a first victory for Pritchard since Earcomesthedream struck at Towcester in December 2015.

"I'm absolutely thrilled," Pritchard said. "I bought him for very little money a few years ago and there were quite a few problems with him. He always showed he was capable but had a little problem with his wind and I said to his owner if we're going to win we need to do the wind op and he told me to carry on as I know what I’m doing.

"The first win I was just waiting to see if he could finish his race out because he'd been in a position over hurdles where it looked like he could win and didn't so it was very satisfying.

"I was still sure he would win on Thursday. There was a lot of runners and they tried to get at him but I was so proud because he stuck to his job. Not many horses get raised 25lb in two races and win again.

"We've worked really hard to get these problems the horse suffered with right. It's all come good now and it just makes you feel good inside, doesn't it?"

"We won't rush him. I'll see what the handicapper does and if he puts him out of the 0-100 mark we'll have to look at some better races but for now we'll just enjoy the moment!"

Pritchard does all the work with Franz Klammer himself from his base in Whatcote, Warwickshire, approximately ten miles from Stratford.

He said: "I've been training for 40 years and I've only ever had a small yard but I always trained a few winners and had some good horses. He's the only horse in training at the moment. I ride him every day, I lead him up and do everything with him but I'll have two or three in the winter.

"I'm enjoying life. Six or seven years ago I stopped training seriously and this just makes me feel good. It's a real pleasure for me. I'm not looking to train more horses, I just want to enjoy my retirement."

Asked how he would celebrate Franz Klammer's latest victory, Pritchard said he would spend the evening with the owner Mark Miller, who was unable to witness his horse's first victories in person due to ill health.

"I'm going to go and have a glass of red wine with the owner Mark and we will enjoy the moment together," Pritchard said. "Sadly he hasn't been able to go racing because he had a stroke but Franz has given him a lot of pleasure.

"Mark has had a lot of sadness in his life since Christmas. He lost his wife so I am absolutely thrilled for him because he's a lovely man. He deserves everything that he’s getting at the moment."