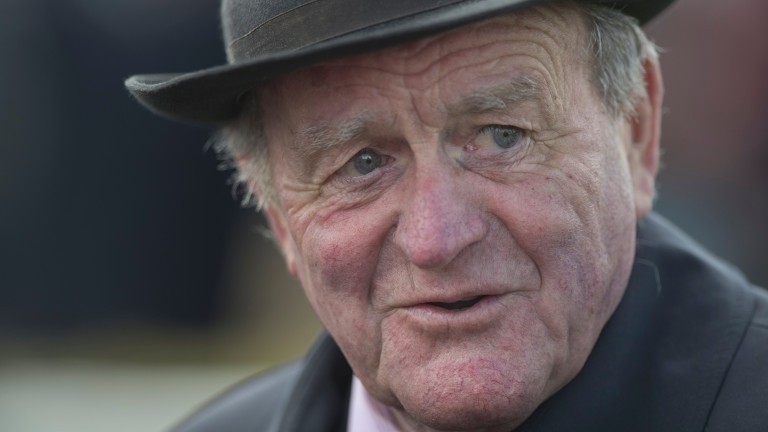 Kevin Prendergast: hoping Mehnah can provide him with another Classic in the Irish 1,000 Guineas
Patrick McCann
1 of 1
By David Jennings UPDATED 8:11PM, MAY 12 2021

At 88, and soon to be 89, Kevin Prendergast says "everything is a bonus" but there could be a big juicy one at the Curragh on Sunday week as the legendary trainer has told the Racing Post he wouldn't swap Mehnah for anything else in the Tattersalls Irish 1,000 Guineas.

It is nearing the fifth anniversary of Prendergast's most recent Classic winner – Awtaad in the Irish 2,000 Guineas in 2016 – but in Mehnah he is convinced he has another genuine Classic contender. If victorious she would be his ninth.

The daughter of Frankel has had only two starts and is unlucky not to be unbeaten. She came from some way back to win her maiden at Dundalk in September and flew home to finish second to 80-1 outsider Keeper Of Time in the 1,000 Guineas Trial at Leopardstown last month, going down by a head. She would have been in front in another stride.

The popular trainer, who will turn 89 on July 5, believes Mehnah has improved since that hugely promising Leopardstown effort too.

'Everything is a bonus at this stage!'

"The sixth home [Joan Of Arc] won the trial back at Leopardstown on Sunday so I don't think it was a bad race at all. I couldn't be happier with my filly and I wouldn't change for anything else."

Asked what it would mean to win another Classic, Prendergast replied: "Everything is a bonus at this stage!"

Prendergast has had his training licence sine 1963 and his first winner arrived in May of that year when Zara won at Phoenix Park.

Mehnah will be trying to emulate Pidget 49 years after she won the Irish 1,000 Guineas to become Prendergast's first Classic winner. He won the race again in 1981 with Artique Royale so he certainly knows what it takes to win the first fillies' Classic of the season and in Mehnah he feels he has a proper contender.

FIRST PUBLISHED 8:00AM, MAY 12 2021
She was unlucky not to win at Leopardstown. She was slowly away and came home well